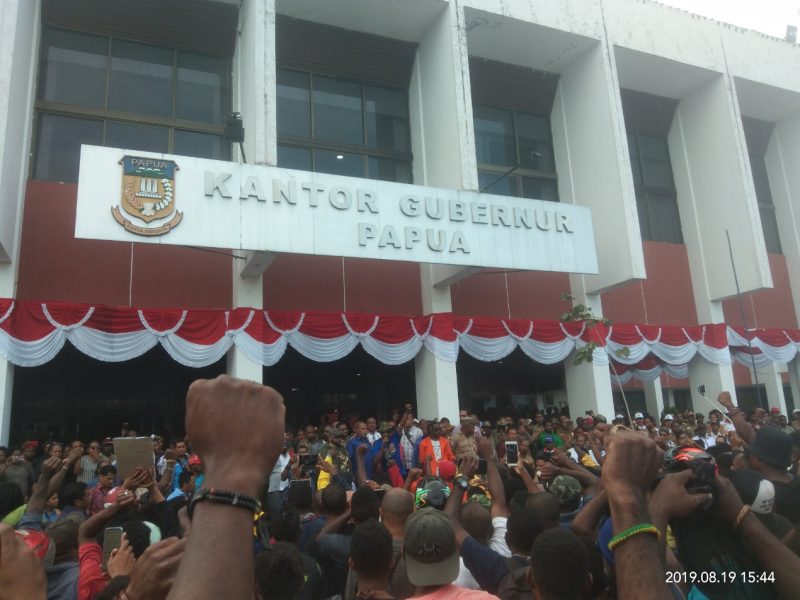 A protest outside the Papuan governor's office in Jayapura, the capital of Papua Province. Photo courtesy of Arnold Belau of Suara Papua. Used with permission.

The Advox Netizen Report offers an international snapshot of challenges, victories, and emerging trends in technology and human rights around the world. This report covers news and events from August 22-29, 2019.

Mobile internet access has been shut down in the Indonesian provinces of Papua and West Papua since August 21, after protests mounted against military abuse.

On August 16, army soldiers barged into a student dormitory in the city of Surabaya, accused Papuan students of disrespecting the Indonesian flag, and called them “monkeys.”

This is a racial slur commonly used against people from the Indonesian-held regions of the island of New Guinea, who typically have darker skin and distinct features from Indonesians in other parts of the country, most of whom are of Austronesian origin.

The soldiers were reportedly responding to a photo shared on WhatsApp by a youth civic organization, which depicted an Indonesian flag lying in a gutter ahead of the country's independence celebrations on August 17.

An estimated 42 students were detained by police the next day for questioning, but were released soon after. Protests and riots in response to the detentions and soldiers’ use of racial slurs have since followed in both provinces, and in the capital, Jakarta.

On August 21, the Ministry of Communication and Information Technology announced that the government would block mobile data service in both provinces until the situation had stabilized.

Speaking to local press, Indonesian Legal Aid Foundation chairman Muhammad Isnur said the government's act of blocking off information is “racist in the context of Papua.” He argued that protests in other provinces have not resulted in internet shutdowns. Throttling has in fact taken place elsewhere, following elections earlier this year.

The Southeast Asia Freedom of Expression Network also spoke out against the block and led a petition opposing the government’s decision. The petition had amassed more than 20,000 signatures at the time of publication.

The protests also may have prompted government authorities to request the removal of a satirical video on YouTube criticizing the Indonesian and Australian governments’ colonization and aggressive pursuit of natural resources in Papua and West Papua. The video, produced by Melbourne-based satirical news and commentary group The Juice, was geo-blocked in Indonesia at the government’s behest on August 27.

Google suspended 210 YouTube channels that allegedly were part of coordinated network that appears to have been linked to the Chinese government. The company said the accounts were running “influence operations” aimed at protesters in Hong Kong. The move came days after Twitter suspended 936 accounts and Facebook removed several pages, groups and accounts for similar reasons.

In a blog post, Shane Huntley, director of Google's Threat Analysis Group, said his team had found the channels used “VPNs and other methods” to conceal the accounts’ origin, but didn't specify where they were located.

A medical doctor in Kashmir was arrested after giving an interview to the BBC, in which he pleaded with authorities to re-establish internet connections for medical facilities in the region. The Indian-controlled state has been in a near-total communications blackout since early August.

“[The] healthcare scheme is entirely an internet-based scheme,” said Dr. Omar Salim, explaining that patients’ health data and information about their eligibility for free medicines is all stored in internet-based systems. ”Without the landline and internet connectivity, we are unable to provide free medicines,” he said.

Salim was detained shortly after giving the interview and his current status is unknown, likely due to the communications blackout in the region.

A Palestinian student bound for Harvard University was detained and deported by US border authorities on August 26. Although he had obtained a student visa prior to traveling to the US, Ismail Ajjawi was stopped on arrival in Boston, where he says a border agent searched his electronic devices and scanned his social media profile. The agent told Ajjawi that she “found people posting political points of view that oppose the US.” This appears to have justified authorities’ decision to revoke Ajjawi’s visa and send him back to Lebanon, where his family resides.

In a statement repudiating the move, PEN America’s Summer Lopez wrote that “preventing people from entering the country because their friends critiqued the U.S. on social media shows an astounding disregard for the principle of free speech.”

Administrators at Harvard University are negotiating with government officials, hoping to ensure that the 17-year-old can return and begin classes on September 3.

In the Polynesian region of the South Pacific, the government of Tonga is considering a ban on Facebook as a measure against posts deemed ‘slanderous’ toward the royal family.

Tonga, which is a constitutional monarchy, has around 62,000 Facebook users out of an estimated population of 100,000. The monarchy has critics on social media, especially Facebook, where users often employ pseudonyms.

A recent “allegation of a sexual nature” against the king and his daughter angered the prime minister who later formed a multi-agency working group to consider banning the popular social media platform. The prime minister has not indicated whether this will require court approval or a simple executive order to country’s sole internet service provider, Tonga Cable, to block access to the platform.

Feminist organizations are calling on tech platforms — namely Twitter and Facebook — to take greater measures to protect women’s free speech rights and safety on social media. Groups including Article19, Derechos Digitales, R3D and the Association for Progressive Communications issued and signed a statement asking companies to “streamline reporting processes against targeted harassment, intimidation and threats that women experience in the context of a social protest,” and to take action against online harassment while not infringing other fundamental rights online.

The call came after a series of public demonstrations across Mexico in which groups spoke out about violence against women in the country, and Mexico’s rising trend of killings of women or “femicides” — officials estimate that 10 women are killed in Mexico every day. Demonstrators called on public officials to pursue justice and accountability for crimes against women, which are often get impunity. While the events were coupled with positive messages of support online, they were also met with a massive wave of online harassment, prompting the appeal to tech platforms.