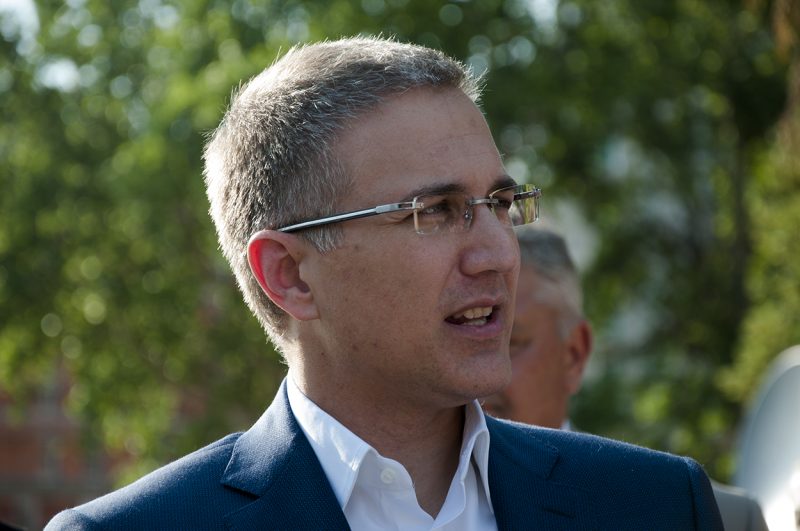 Nebojsa Stefanović, Minister of Interior of the Republic of Serbia. Photo by Zoran Drekalović/Istinomer, used with permission.

This article originally appeared on Istinomer [1] (Truth-O-Meter), a fact-checking initiative of the Center for Research, Transparency and Accountability (CRTA [2]). An edited version is published below as part of a content-sharing agreement.

The team of the fact-checking initiative Istinomer (Truth-O-Meter) proved false the claim by Serbian Minister of Interior that “today all journalists are safe.” Since 1991, Serbia has witnessed killings of journalists ordered by highly-ranked government officials.

According to Istinomer's research, threats against individual journalists or editorial teams have become rather frequent over the past few months. The Independent Journalist Association of Serbia (NUNS) says that from 1 January to 10 April this year, 12 verbal threats [3] were recorded compared to 23 in all of 2018 [4].

Those who threaten (sometimes even by death) are usually using the internet: they leave comments on posts, send messages to journalists’ Facebook inboxes, directly message them on their mobile phones or even mail letters such as the one addressed to the editorial team of independent TV station N1 in February. Journalists working at N1, which is an affiliate of CNN, are often labelled by pro-regime supporters and trolls as “foreign agents.”

The station was also among those targeted in the articles by the website Istraga.rs [5]. The site opened in February 2019, and its authors (unknown and unsigned [6], while the website also has no Impressum) have published “exposés” of reputable independent media outlets like KRIK and NIN, as well as civil society organizations or high-profile participants of anti-government protests, such as “One in five million” movement [7].

Some of their articles present information about the organisations’ donors as proof of them being foreign agents, while others dox [8] individuals, especially young women, using their vacation photos from social media to depict them as raveling in luxury with their alleged high salaries. In the Balkan context, this type of article has a twofold purpose: intimidation of the targets, as they are made aware they are under surveillance, and inciting the general public against the media.

A Facebook page called Srbija naša zemlja [9] (Serbia our country) deploys similar tactics, labeling journalists as “extremists”, “Serb haters” and accuses them of demolishing the constitutional order, whereas it also puts the opposition politicians into a negative context.

The impression of the representatives of the Independent Journalists’ Association [10], a member of the International Federation of Journalists [11], is that the very atmosphere in the society stimulates threats against journalists. They say there are high state officials who pressure journalists.

Due to the frequent threats addressed against the above-mentioned N1 station, the international and European Federation of Journalists [12] urged the authorities to stop targeting and labelling the journalists in a statement issued on 28 March. Freedom House [13]‘s research chief for Europe and Euro-Asia, Zeljka Caki, said on 23 March that “Serbian politicians should refrain from calling journalists traitors and foreign mercenaries.” She added that “the government has a duty to protect freedom of media and not to stimulate anger and hatred against journalists who are doing their job.”

Despite all of the stated, Minister of Interior Nebojsa Stefanović said that “today all journalists are safe” on 24 March 2019, on N1 TV [14]:

The period from 2002 to 2008 was marked by assassinations of journalists in Serbia, but today all journalists are safe. Anyone who threatens a journalist is automatically and expediently brought to justice. These people are arrested, processed and brought before prosecutors’ offices and courts. Every threat, any violence, each strike. We are making the prescribed penalties more severe.

He said that “the period from 2002 to 2008 was marked by assassinations of journalists in Serbia”. However, there have been no cases of journalist assassinations in Serbia in that period. All reported assassinations occurred before 2002: the owner and journalist of “Dnevni telegraf” and “Evropljanin” magazines, Slavko Ćuruvija [15] was killed in 1999; while “Večernje novosti” correspondent from Jagodina, Milan Pantić was killed in 2001. Suspicions still surround the 1994 death of “Duga” journalist, Radislava Dada Vujasinović, suspected of having been murdered.

In the period mentioned by the minister, there was one serious attack against a journalist, but it was not a murder case — a bomb was thrown through the window of the home Dejan Anastastijević, journalist of Vreme weekly, while he and his spouse were inside. The case has not been resolved yet.

A similar attack occurred in December 2018, when two Molotov cocktails were thrown at the garage of Milan Jovanović, a journalist with the independent outlet Žiginfo.rs. Jovanović had investigated corruption cases involving local authorities in the municipality of Grocka. His entire house was burned down [16].

The former president of Grocka municipality, Dragoljub Simonović, is the main suspect of ordering the attack. The public prosecutor demanded a maximum sentence [17] for him and three others. The trial for this act opened in May 2019. The accused politician brought a crowd of supporters to cheer him during his first hearing [18]. This local strongman is also suing the journalist and his editor in civil court for defamation and “causing emotional harm.” Jovanović is now escorted 24 hours a day by two plainclothes policemen. 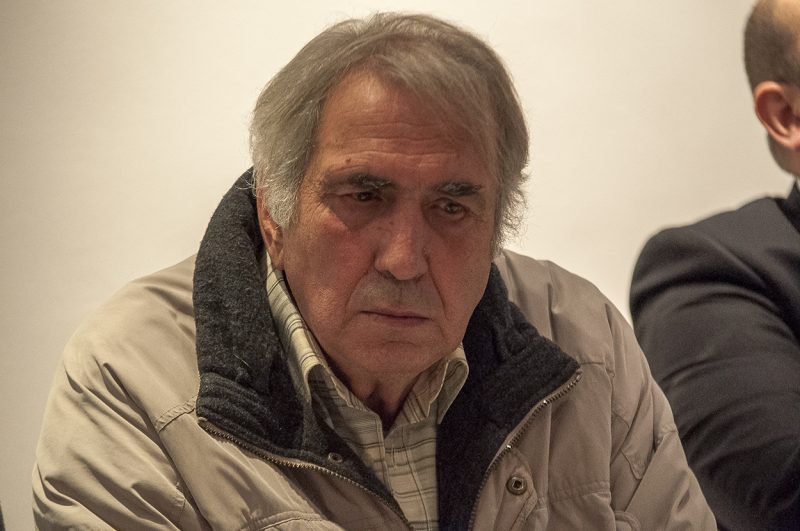 Journalist Milan Jovanović escaped an assassination attempt which included arson of his house, which burned down. Photo by Zoran Drekalovic/Istinomer, used with permission.

In this case, at least the perpetrators and suspects were identified. Journalist Dragana Pećo of the Crime and Corruption Reporting Network (KRIK) wasn't so lucky — more than two years since her apartment was broken into and ransacked [19], the perpetrators are still at large [20].

How swift is justice in Serbia?

Stefanović also said that every person threatening journalists and attacking them “will be expediently brought to justice.” According to NUNS, however, “justice is not that expedient and, in some cases, it is not even reached.” Marija Vukasović, a lawyer from the Independent Journalist Association of Serbia told [21] Istinomer in April:

Regarding the previous few years, there is still a large number of unresolved cases which are still pending before the prosecutors’ offices and where perpetrators were not identified. In the past couple of months, there have been cases where police and prosecutors acted promptly, but this is certainly not enough to improve the situation, particularly not enough to say that every threat, every violence and strike is processed.

In figures, out of 31 cases of assaults and pressures against journalists that occurred last year, four have been resolved, 16 are still pending before the prosecution and police, and a misdemeanour procedure has been instituted in one case, NUNS data shows.

“In five cases, it was established that there were no elements of a criminal offence for ex officio prosecution, and two cases are in judicial proceedings. Two cases of threats have not been reported, and we have no information regarding one case”, Vukasović says.

In the year 2017, the total number of registered assaults and pressures against journalists was the same as in 2018 – 31. Out of that number, 13 cases are still pending before the prosecution office (in one case the application of opportunity principle is in course).

“In nine cases it was established that there were no elements for prosecution, as in, there were no elements of a criminal offence for ex officio prosecution. Six cases have been resolved – three cases by sentence, two cases by application of opportunity principle [22] and, in one case, another state assumed responsibility for criminal prosecution. In two cases, the procedure is ongoing, and in another, the court rejected the criminal charges” NUNS lawyer explains.

Concerning stricter penalty provisions, which was also announced by the Minister, Vukasović commented that NUNS representatives were not aware of any ongoing amendment of criminal legislation. She said:

If it is ongoing, it would be advisable to involve relevant journalist and media associations, considering that we participate in the work of the Permanent Working Group on Journalists’ Safety and there is also a sub-group for analyzing the Criminal Code, where an analysis has been prepared regarding criminal offences that may be perpetrated at the detriment of journalists. Together with legal experts and lawyers, NUNS has prepared the proposals for amendments of criminal provisions that would improve the status of journalists with regard to their right to safe and undisturbed work.