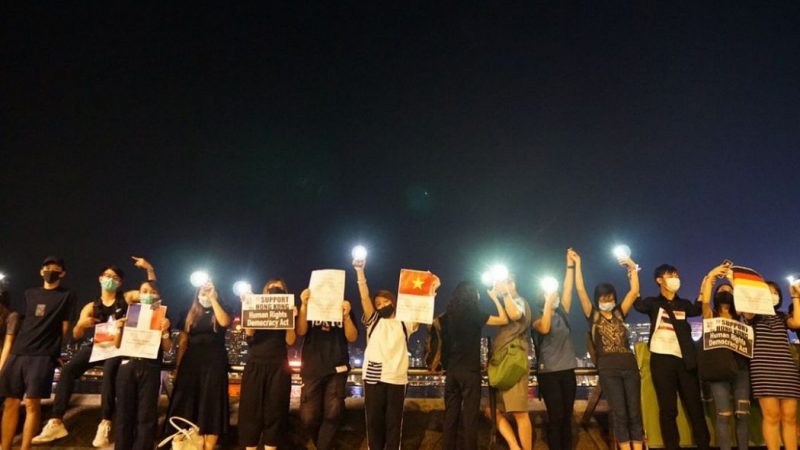 Inspired by the 30th anniversary of the Baltic Way, more than 200,000 people formed a human chain on 23 August 2019 across the city to mark the “Hong Kong’s Way” to freedom and democracy.

The Baltic Way was a peaceful political demonstration that took place on 23 August 1989 when two million people formed a human chain across former Soviet states of Estonia, Latvia, and Lithuania. Seven months later, Lithuania became the first Soviet state to declare independence. All three Baltic states were later recognized by most Western countries by the end of 1991.

The Hong Kong Way was conceptualized as a collective action to show the Hong Kong people’s will in the struggle for democracy and freedom.

The anti-extradition protests have been going on for more than two months and the protest agenda has expanded already from the withdrawal of the bill to an independent investigation of the police force and the establishment of a democratic political system.

The principle of “One Country Two Systems” and “Hong Kong people ruling Hong Kong” is protected by the Sino-British Joint Declaration and Basic Law which serves as the city's constitution. However, the universal suffrage of the Legislative Council and Chief Executive has been deferred after Beijing imposed a highly manipulative candidate screening mechanism on the city’s election system in a decision made by the Standing Committee of the National People Congress on 31 August 2014.

Beijing's change of its Hong Kong policy triggered massive pro-democracy protests in 2014, which lasted for three months and came to be known as the “Umbrella Revolution.” But the peaceful protests dit not deter Beijing's direct intervention in Hong Kong. Six pan-democratic lawmakers were disqualified over protests during their oath-taking and a number of district election candidates were disqualified over their public speeches.

Worse still, as reflected in the political crisis of anti-extradition protests, the current Chief Executive Carrie Lam has failed to answer the people's demand even after one million people had taken to the street on 9 June. Backed by Chinese government, she ignored the public demand for the complete withdrawal of the amendment bill and chose to clamp down the peaceful protest on 12 June with the police using more than 150 tear gas canisters, which pushed protesters to take more disruptive actions.

People's protests in the past two months have been labelled as a “Color Revolution” instigated by hostile foreign governments. The Chinese government even denounced disruptive protests as acts of terrorism. Yet, despite threats of military intervention by China, 1.7 million people peacefully took to the streets again during heavy rainfall on 18 August.

Such determination marks the “Hong Kong Way” in the struggle for democracy under a repressive regime. Youth activist Joshua Wong explains the meaning of the Hong Kong human chain on Twitter:

The Baltic Way have shown the power of solidarity & non-violent movement. We hope HK Way could let the world to see our demand in freedom and democracy. HKers are facing what Baltic were facing from USSR 30 yrs ago, we must win in this battle! pic.twitter.com/Z6dtTenOek

Without a centralized organization, the city-wide action was coordinated through various social media platforms. Protesters went to a subway station of their own selection at 7 p.m. and formed a 60-kilometer human chain from 8-9 p.m. Over 210,000 people participated in the action. [Note: original estimation was 135,000 but as parallel chains had appeared in many districts, the figure was later adjusted to 210,000.]

We did it! An estimated 135,000 people in Hong Kong formed 60km of human chains to encircle city in #HongKongWay in support of democracy #baltijasceļš30 pic.twitter.com/uFNsO7fmRk

In addition to the human chain along three major subway lines, a large number of hikers decided to form a chain on the ridge of Lion Rock, a mountain located at the center of Kowloon peninsula. The mountain has been viewed as a symbol of core values shared by Hong Kong people since 1970s when the term “Lion Rock Spirit” became popular through a TV series depicting the livelihoods of the grassroots during that period.

Along the ridge of Lion Rock and many parts of HK saw HKers holding hands in line to show the world our uncompromising thirst for freedom, reminding them of the Baltic Way 30 yrs ago.

Lithuanians made this Baltic Way human chain in parallel with the #HKWay today in supporting #HongKongers. Thank you for joining hands with us, Lithuania! ? @Adomenas#FreedomHK #antiELAB #WeConnect #StandWithHK pic.twitter.com/RY5hxa83sC