Moscow’s revolution will be memed, online and on canvas 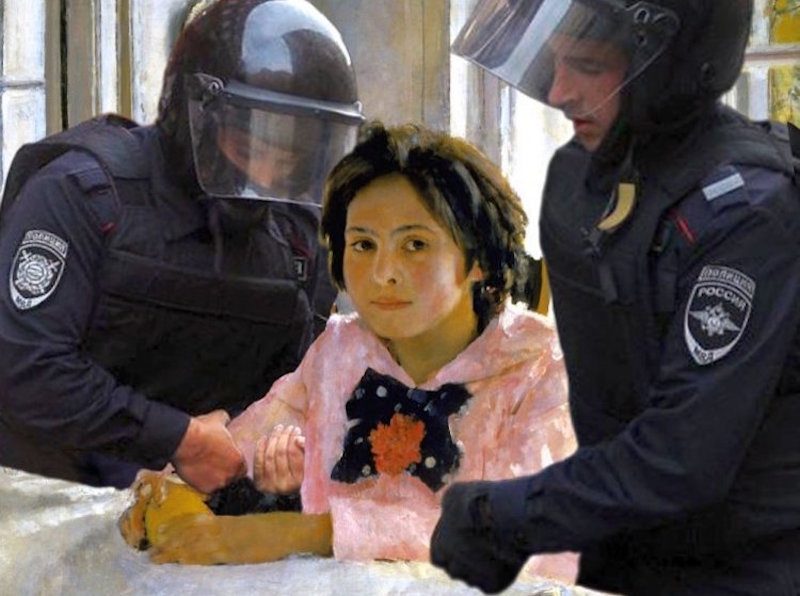 When the celebrated Russian artist Valentin Serov sat down to paint 12-year-old Vera Mamontova in her father’s leafy Abramtsevo Estate, it is safe to assume that he never imagined that 132 years later, his painting would become an internet protest symbol.

If you follow the RuNet or read The Moscow Times, you will know that Serov’s Girl With Peaches (1887), along with other famous artworks, have become the basis of a series memes distributed by a Telegram Bot mocking the violence unleashed by Russian law enforcement agents during ongoing protests against local authorities in Moscow. Protesters are outraged that the electoral commission has refused to register independent opposition candidates seeking to run in September’s local elections. The standoff continues, and thousands have been detained.

The Telegram Bot (aka @zimorodok_mult) began broadcasting its art-inspired memes on 10 August, starting with the doctored image of Serov’s Girl With Peaches. In the weeks since, this user has posted photoshopped images of dozens of famous artworks, featuring figures begin are detained, beaten, or dragged away by marauding Russian riot police. It’s just one of several creative RuNet responses to protest movements, so begs deeper reflection.

Muscovites protested again today; many were detained. In response, Russian internet users are photoshopping riot police into famous artworks. Here they are, in Ilya Repin’s Ivan The Terrible and His Son… pic.twitter.com/wMO7wMbzzX

Earlier this year Svetlana Shomova, a professor at Moscow’s Higher School of Economics, published a paper entitled Hieroglyphics of Protest: Internet Memes and Protest Movement In Russia in which she argues that memes are a “mechanism of political participation for the masses.” In this article I consider how Shomova’s analysis applies to the current protests and, secondly, what their composition tells us about their dynamics.

One of the most prominent figures in the protests is Lyubov Sobol, a lawyer and activist with Alexey Navalny’s Anti-Corruption Foundation, which is widely known for its YouTube videos documenting corruption among the Russian elite. Sobol was one of several figures linked to this movement whose candidacies were rejected by the electoral commission on seemingly spurious grounds.

In an interview with the Moscow Times last November, Sobol laid out her vision for Navalny’s YouTube presence. Justifying the channel’s shift towards comedy, she stated: ‘We need to give people variety and entertainment or they will get tired of us […] There is currently no Russian John Stewart or John Oliver.’

Memes, as Shomova writes, are part of the internet’s culture of laughter—they galvanise political engagement through entertainment, as envisaged by Sobol. All too frequently the terms “theatre” and “show business” are used to describe empty political gestures and policies. @Zimorodok_mult's memes demonstrate that ‘politics’ and ‘entertainment’ are far from antithetical. 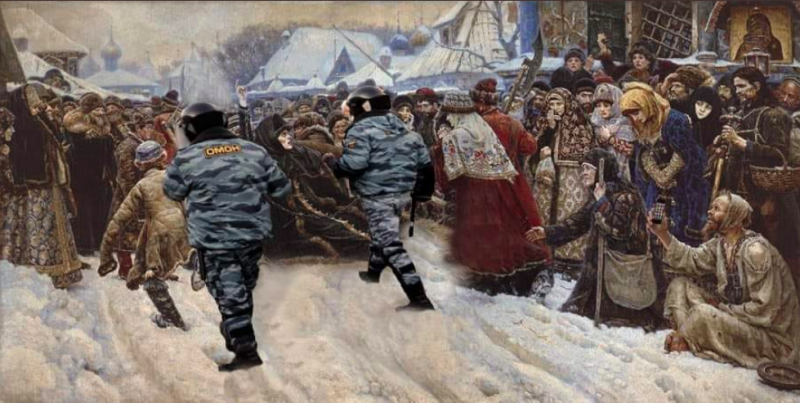 It’s no coincidence that the memes featured in this story are based on classic Russian works of art, the most popular being the riff on Valentin Serov’s “Girl With Peaches”, which has racked up more than 2,800 likes on Twitter.

Why does this matter?

If you have been following Russian politics since 2011, you will have noticed that the authorities have a penchant for equating political opposition with foreign influence. Think of Vladimir Putin’s claim that protesters on Bolotnaya Square (which were also motivated by electoral fraud) were acting on behalf of foreign powers, or the infamous “Foreign Agents Law” of 2012. The discursive device is clear: We, the authorities, are the guardians of Russia’s sovereignty—challenge us, and you challenge the nation. With Church and State locked in an unholy alliance since Pussy Riot’s punk prayer in 2012, the authorities have posited themselves not only as defenders of Russian sovereignty, but also of the Russian soul.

The Mona Lisa’s cameo in the image below can be seen as a wry nod to these accusations. Many of the artworks featured in the memes are housed in Moscow’s Tretyakov Gallery, an institution founded specifically to showcase works by Russian artists. In @Zimorodok_mult’s memes, the paintings’ subjects are portrayed as victims of police oppression. By establishing a visual equivalence between the protesters and iconic figures of Russian art, the memes implicitly posit the former as the embodiment of the nation rather than its saboteur. 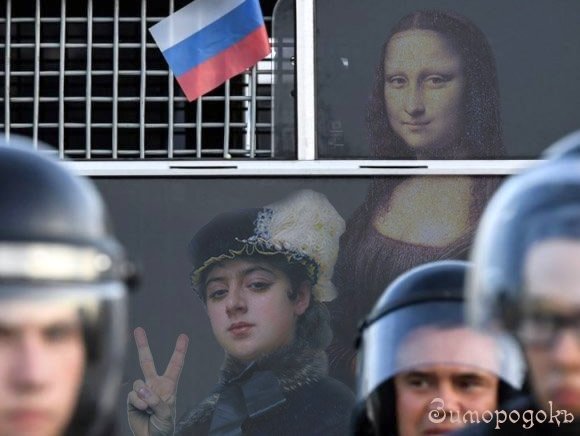 A van used to detain protesters in Moscow, edited by @Zimorodok_mult

Another striking element of the memes is their gender dynamic. It seems blindingly obvious to say that the works by Serov, Ivan Kramskoi, Vasily Tropinin and others all feature a woman or girl as their subject. Meanwhile, their aggressors all appear to be male police officers. Whether intentional or not, the contrast between female victim and male oppressor evokes the prominence in the current protests of women such as top Navalny associate Lyubov Sobol, and the “Tiananmen Teen”, a 17-year old girl who read the Russian constitution out loud to riot police (I've written more about this subject here). Indeed, the subjects’ serene appearance—Servov’s eats peaches, Kramskoy’s looks haughty, and Tropinin’s is engaged in making lace—particularly evokes the latter, tapping into assumptions about the social roles, and relative strength, of men and women.

Much has been written on “slacktivism”, the derogatory term for political and/or cause-based social media activity that performs social engagement without creating tangible change. You could argue that @Zimorodok_mult’s memes embody the term: they ride the wave of a pressing current issue without actively participating in it. But there’s also a good case to argue that these memes actually perform a role integral to political activism. While scrolling my way through @Zimorodok_mult’s Twitter feed, I was reminded of something that Pyotr Verzilov, Pussy Riot’s unofficial spokesperson, had said in the wake of last year’s 2018 World Cup “Pitch Invasion,” when four activists ran onto the pitch mid-match dressed as police. 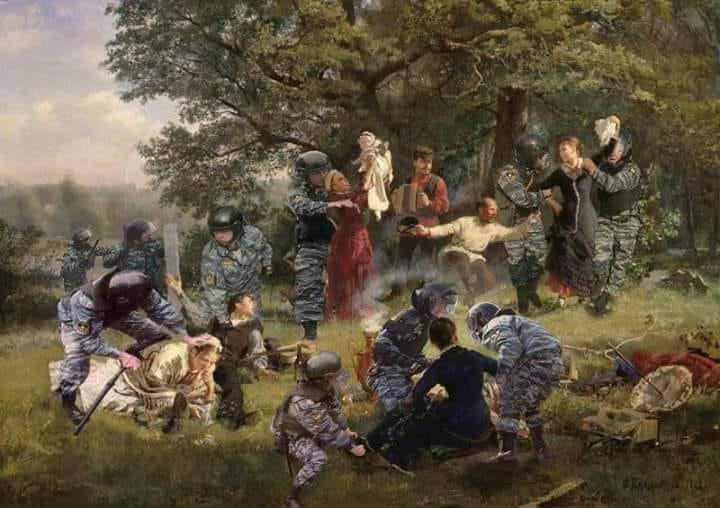 The participants of Alexei Korzukhin’s “Sunday” (1881) were also detained by riot police added by @Zimorodok_mult.

“I know the Russian psychology,” Verzilov said, “a police uniform is sacred. Nobody will ask for your permit or accreditation.” The memes featured in the post fracture—if only in a small way—the inviolability of police authority. No longer distant and menacing figures, they become figures of fun whose images are controlled by ordinary citizens. Indeed, in a country in which online posts deemed to “disrespect” state symbols or the authorities can carry a jail sentence, the act of meme creation is in itself an instance of political activism.

The current protest wave has seen horrific police brutality—the bite of the state is by no means blunt. But as these memes, and others, spread from feed to feed, from iPhone to iPhone, the aura of authority that may prevent citizens from taking to the streets in the first place is gradually eroded. In short, they herald that awkward moment when the people are no longer afraid.

This post originally appeared on the author’s blog. It has been edited for clarity and house style.