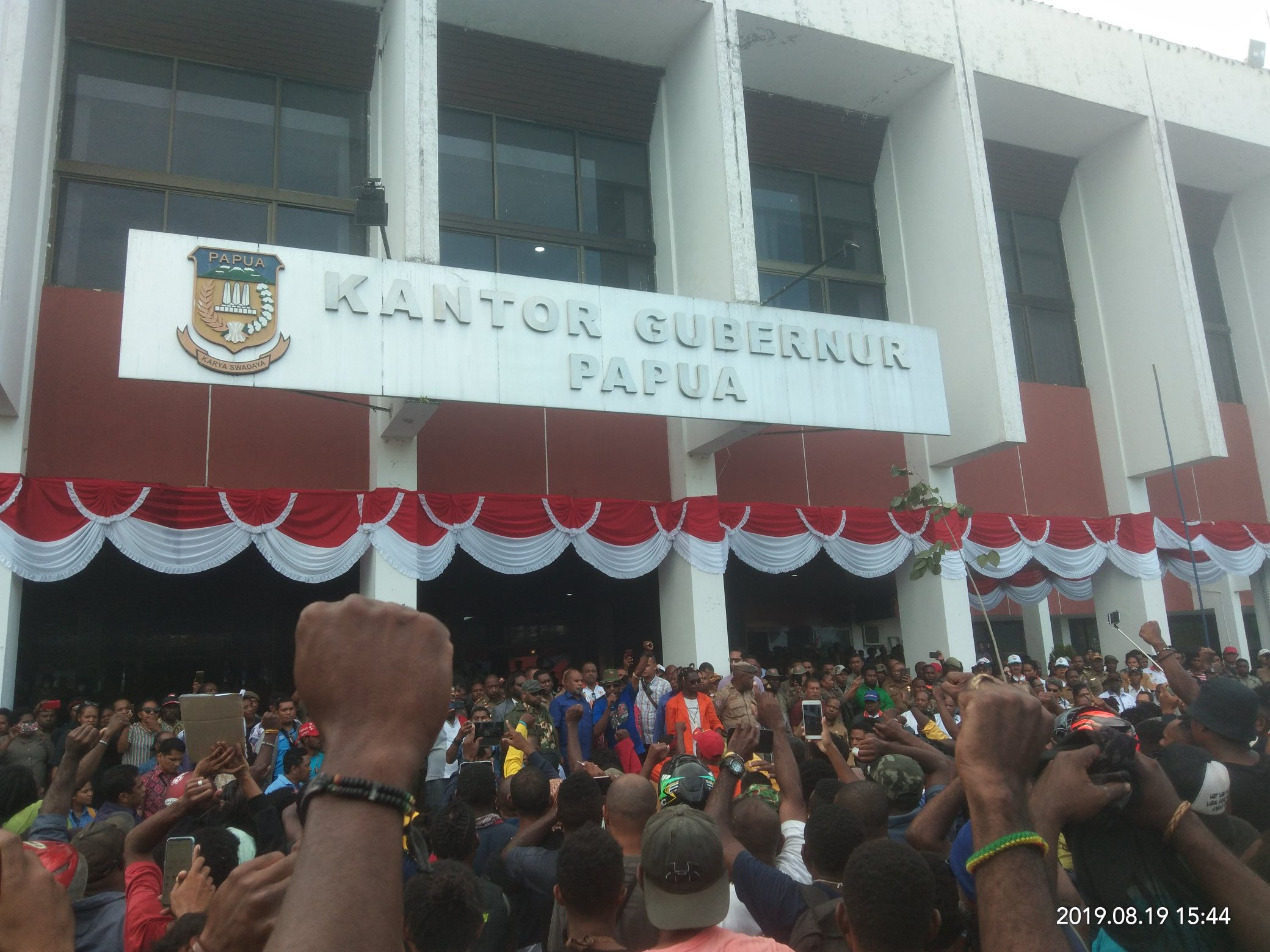 A protest outside the Papuan governor's office in Jayapura, the capital of Papua Province. Photo courtesy of Arnold Belau of Suara Papua. Used with permission.

Protests have broken out in the Indonesian province of West Papua after Indonesian soldiers were alleged to have racially abused Papuan students in Surabaya, the country's second-largest city. The government responded by sending in more troops and imposing internet restrictions.

West Papua and Papua provinces (formerly known as Irian Barat, or West Irian) were a Dutch colony from the 16th century and remained under Dutch control when the rest of the Dutch East Indies became independent in 1949. Following a 1961 military operation by Indonesia President Sukarno to gain control of the area and complete his vision of unifying the archipelago, the Dutch agreed to hand the colony over to the United Nations in 1962. The region officially became part of Indonesia in 1963. A separatist movement has since emerged, with many groups inside and outside of the country calling for West Papua's independence from Indonesia. Papuans who demand self-determination sometimes fly the Morning Star Flag.

On 16 August 2019, around 15 soldiers reportedly barged into a student dormitory in Surabaya and accused Papuan students of disrespecting the Indonesian flag. The soldiers’ actions were reportedly triggered by a photo shared on WhatsApp by a youth civil organization, of an Indonesian flag lying in a gutter ahead of the country's independence celebrations on August 17.

The soldiers allegedly hurled racist comments at the students, calling them ‘monkeys’. (Papuans are ethnically Melanesian, while the majority of  Indonesians are Austronesian. Papuans are frequently the targets of racism in Indonesia). Around 42 students were taken to police headquarters the following day for questioning, but were released later in the afternoon.

Reports about the incident triggered a riot in Manokwari, the capital of West Papua province, where protesters burned down the West Papua Legislative Council building. Protests soon spread to other districts across West Papua and Papua, as well as the capital city Jakarta and other major cities in Indonesia. Some protestors have called for a referendum on the independence of West Papua.

A map of Indonesia, with West Papua province highlighted in green. CC BY-SA 3.0

#PapuaBukanMonyet (Papuans are not monkeys)

On Twitter, many Indonesian netizens used the hashtag #PapuaBukanMonyet (Papuans are not monkeys) to condemn the soldiers’ racist behaviour:

Stop screaming that the unity of Indonesia is unarguable when we're still racist. Don't bother calling for peace, demand justice, because peace will come once justice is upheld. #PapuaIsNotMonkey #PapuaMyBrothers #PapuaIsIndonesia

On Instagram, Indonesian President Joko Widodo urged Papuans to forgive and forget the controversial incident, assuring assured West Papuans that the government would uphold the dignity and prosperity of everyone in Papua and West Papua provinces.

But some netizens advised him to act swiftly and punish the soldiers who abused the Papuan students.

[We're] tired of forgiving, arrest those in Surabaya who triggered this, the military officer, police and groups which spread hate. Show us you have a say in this.

A few days later, the president commanded the national police chief to take firm action against the officers in question. The media also reported that national police reinforcements had been sent to West Papua, where protests had escalated because of the incident.

On 19 August, the Ministry of Communication and Information Technology (Kominfo) announced that the government was conducting a systematic throttling of internet connectivity in West Papua and Papua provinces, in order to curb the spread of misinformation that could further inflame tensions in the region.

On 21 August, Kominfo issued another release announcing that the government has decided to block data service in both provinces until the situation had stabilized.

Journalist Arnold Belau, who was in Jayapura, the capital of Papua province, on 19 August, tweeted about the internet outage the next day:

Since yesterday evening the internet networks in Jayapura city is out, except wifi. What's going on Telkomsel? Another fish chewed on the fiber optic? Or another huge earthquake? Such antics..

Global Voices reached out to Belau on 22 August, and he confirmed the throttling of the internet in Papua:

President Joko Widodo defended the government's decision to block the internet in West Papua and Papua provinces, describe the move as serving ‘a common good’.

Indonesian NGO the Institute for Criminal Justice Reform (ICJR) pointed out, however, that internet throttling during a crisis situation is a direct violation of Article 4 of the International Covenant on Civil and Political Rights.

Meanwhile, the Indonesian chapter of the Southeast Asia Freedom of Expression Network has launched a petition calling for an end to the government's censorship of the Internet in West Papua and Papua provinces. The petition states that:

Blocking and restricting access to the internet in Papua and West Papua instead will make it harder for people living outside of the two provinces to verify facts and what has happened, to check on the safety of friends and relatives because people in Papua have no or limited access to send messages