An effect of rising deforestation in Brazil, Amazon fires turn into a global crisis 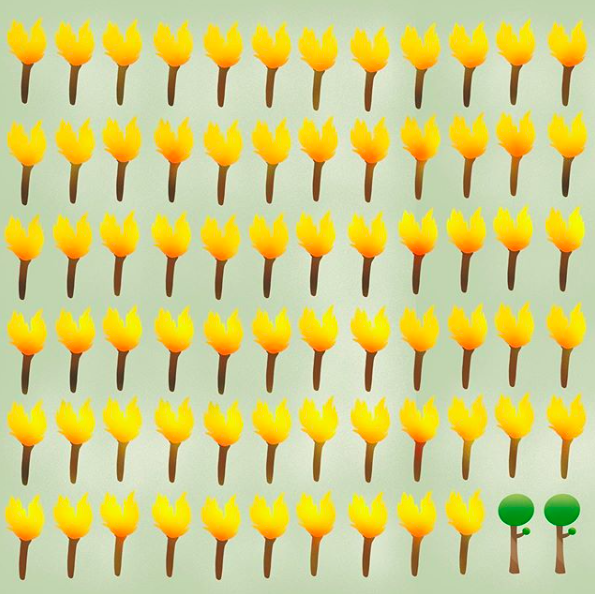 Illustration by @byleylaali/Used with permission

In December 2017, while receiving an honor medal from the Brazilian government, Cacique Raoni, an indigenous Kayapo chief, said: “We must be united, because they want to reduce our lands”. Raoni Metuktire became an internationally recognizable face thirty years ago, when he toured with British musician Sting through 17 countries to denounce deforestation in the world's largest rainforest. Raoni was born in Mato Grosso, a state in Brazil's central west region where large swathes of the Amazon have been burning for the past week.

The Chapada dos Guimarães National Park is one of those areas; it burned for 10 days before the fire could be controlled on August 19. According to newspaper Folha de S. Paulo, in 2019 alone 12 percent of the park's area was consumed by wildfire. Brazil has had a record-breaking year in number of wild fires, and the state of Mato Grosso is the Brazilian state that recorded the highest amount of blazes.

Mato Grosso, a major farming state in Brazil, shares a border with Bolivia, where wild fires affected an area equivalent to approximately 745,000 football fields. After overseeing the region from a helicopter, Brazil’s environment minister, Ricardo Salles denied he had performed budgetary cuts in inspection operations, and blamed the dry weather and criminals for the situation (without presenting evidence).

The events described above capture the current scenario in Brazil, which has recently drawn the attention of the whole world. For the past two days, hashtags such as #PrayForTheAmazon and #ActfortheAmazon have been trending on Twitter. It is a scenario with activists who have long denounced deforestation and crimes against the Brazilian environment, usually committed for the sake of expanding cattle ranches and farms. The effects of the dry season, the lack of state action, and a government who refuses to take responsibility have all contributed to the plight of the Amazon region.

Smoke from wildfires in the #AmazonRainforest spreads across several Brazilian states in this natural-color image taken by a @NASAEarth instrument on the Suomi NPP satellite. Although it is fire season in Brazil, the number of fires may be record-setting: https://t.co/NVQrffzntr pic.twitter.com/4JTcBz9C8f

According to many experts interviewed by several Brazilian news outlets this week, the fires have more than just one cause. “Deforestation, seasonal burnings, lack of funding and inspection” are among those listed in a story gathered by news site UOL.

President Jair Bolsonaro has in more than one occasion blamed NGOs for the fire, without presenting evidence — he says he has “a hunch” that those groups are starting fires with the objective to harm his government and his image abroad. Bolsonaro says he has cut 40 percent of the budget destined to NGOs in Brazil.

So, it might be happening, yes, I’m not affirming this, criminal action from these NGO people to draw attention against me, against Brazil’s government. This is the war we are facing.

Germany and Norway have both frozen donations to the Amazon Fund, which bankrolls recovery projects and monitors deforestation in the the region. Both countries, which are the fund's biggest donors, have justified their decisions on the grounds of the rapidly increasing deforestation during the Bolsonaro government.

In this current crisis, the Amazon Fund is a major funder of water trucks and firefighter's gear to combat the ongoing fires.

The Amazon under Bolsonaro

Between January and August 19, 2019, Brazil has seen 72,843 fires, an increase of 83 percent compared to the same period in 2018, according to data by Brazil's National Space Research Institute (Inpe). A report by the Amazon Environment Research Institute (Ipam), quoted by El Pais, says that 60 percent of the blazes started inside private properties, 16 percent in indigenous lands and one percent in protected areas.

In the #AmazonRainforest, fire season has arrived.

The MODIS instrument on NASA’s Aqua satellite captured this images of several fires burning in the Brazilian states of Rondônia, Amazonas, Pará, and Mato Grosso on August 11, 2019. pic.twitter.com/btulI01v5n

When Inpe showed in July that deforestation in the Amazon was growing, the government protested. Brazil's Environment Minister Ricardo Salles said the data was innacurate and that they would hire another firm to present alternative numbers. The Minister of Institutional Security, General Augusto Heleno, said the numbers were “manipulated”. And President Bolsonaro himself suggested Inpe's director could be working for an NGO. He also said:

If all the devastation that you accuse us of doing now and in the past [were true], the Amazon would be extinct already.

Finally, in August, the government fired Inpe’s director Ricardo Galvão for publicizing the data on deforestation.

The Amazon is a frequent topic in Bolsonaro's diatribes. During his presidential campaign, he frequently advocated for the area to be open to mining. He has echoed a view that dates back to the Brazilian military dictatorship period, which says that the Amazon should be “integrated” to the country through development in order to avoid it being “delivered” to foreign nations. Journalist Rubens Valente writes:

To summarise, this theory states that NGOs and indigenous people intend, in collusion with foreign countries, to divide the region through the independence of a few areas. The external attacks “on Brazil”, meaning, to the Brazilian government, would hide a secret international plan to take over those rich and exuberant portions of land.

From the 1980s on, those ideas began to be spread even more intensely in military circles (…)

Such fiction finds a fertile soil in the government of Jair Bolsonaro, a reformed captain, who has set the agenda on the relationship of the Brazilian government with the Amazon and the foreign countries that encourage the region's preservation.

Bolsonaro’s minister Salles defends that the solution for the Amazon's problems is “to monetize” the region by opening areas for commercial development. Under Salles’ tenure, fines for crimes against the flora have dropped 23 percent.

10.2 million tweets on the Brazilian Amazon in the past 7 days. 4.3 million just yesterday. The data is similar, in terms of volume, to the commotion seen after big terrorist attacks. This network has 2.1 million RTs, captured during 14 hours, until 7 pm yesterday, Brasilia time.

Many celebrities who tried to show support ended up using images that were either old or not from the Amazon. That includes the Brazilian supermodel Gisele Bündchen and France's President Emmanuel Macron, who both posted an image from the 1990s when speaking on the matter.

Macron, who met Cacique Raoni this year, called a G7 meeting to discuss the situation. Bolsonaro reacted by saying that the French president was trying to use a domestic issue in Brazil for his own political gains in France:

I’m sorry that president Macron seeks to weaponize an internal issue of Brazil and other Amazon countries for his personal political gains. The sensationalist tone with which he refers to the Amazon (even appealing to false pictures) does not contribute in any way to the solution of the problem.

The Brazilian government is still open to dialogue, based on objective data and mutual respect. The suggestion of the French president that the Amazon issues should be debated by the G7, without the participation of the countries of the region, evoques a colonialist mentality in the 21st century.

But there are signs that the criticism is producing effects. The Novo Party, of libertarian leanings, has been attempting to distance itself from Salles, its most prominent member. Calls for EU sanctions on certain Brazilian products are gaining strength. With protests around the world against his government, Bolsonaro decided to send the army to fight the fires and broadcasted the announcement on national TV and radio. Several cities registered people banging pots and pans while he was on air and protests took the streets in Rio de Janeiro, Brasília and São Paulo.

Indigenous congresswoman Joenia Wapichana and her party colleagues, also formally asked for the impeachment of the environment minister for crimes of responsibility.