Hong Kong protests through the eyes of a Filipino migrant worker 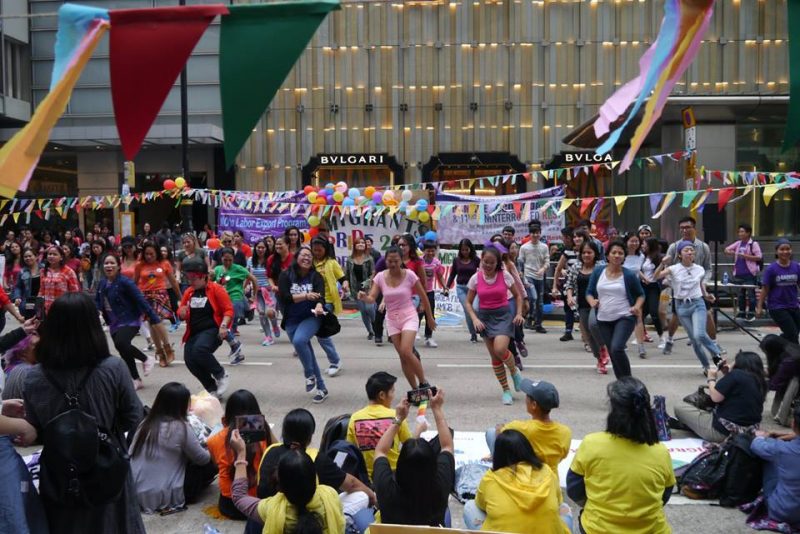 File photo of Filipinos gathering in Central, Hong Kong for a cultural event in November 2018.

There are more than 130,000 Filipinos in Hong Kong, a majority of whom are domestic workers. Every Sunday, many congregate in Central, the business and retail heart of Hong Kong, to spend their day off. This is also where the massive protests in the city have been taking place since June 2019. How have the rallies affected the lives of migrant workers? What are their thoughts about the protests?

Since June 2019, weekly protests in Hong Kong have brought together at least two million people demanding the scrapping of a bill that would allow the extradition of fugitives and other accused individuals to mainland China. Protesters say the bill could undermine democracy by allowing Beijing authorities to order the arrest of Hong Kong-based activists, dissenters, and even critical journalists. The bill has been withdrawn by the government but protests have continued to escalate as more people demand a probe into police violence, the release of arrested activists, and the granting of universal suffrage.

Through email, Global Voices interviewed Elena (not her real name), a migrant worker who has been living in Hong Kong for more than a decade. She is also a volunteer in several networks advocating for the rights of migrant workers.

Elena explains why most Filipino migrant workers are sympathetic to the protesters:

As most of the protesters are young people, many of them grew up in households where Filipino domestic workers took care of them when they were still very young.

The Filipino community also disagrees with the proposed bill. We have not seen anyone or any group publicly expressing support for it. Some Filipinos also joined peaceful marches from Victoria Park to Central.

While we are not prohibited to join the rallies, many are reluctant because of its possible implication to their work and visa status in Hong Kong.

The rallies have affected how Filipino migrant workers gather and interact every Sunday in several public areas. Elene shares how migrant workers have adjusted to the situation:

Some community groups have cancelled their scheduled events in Chater Road because of the protests.

Some workers reported that their rest days are no longer fixed on a Sunday and have become dependent on the schedule of protest actions. This also affects their ability to be with their friends and relatives during rest days. Other migrants just congregate from morning until 2:00 p.m. and will leave Central before 3:00 p.m. to avoid the protests and possible disruptions in the public transportation as well as potential police confrontations.

Some expressed concern about losing their jobs:

While the migrant workers are trying to understand the Hong Kong people's protest, there are of course fears among the Filipino community about their safety and job security as well.

There are also reports that some employers are taking advantage of the situation to deny their domestic workers their rest days.

Elena notes that migrant groups have rejected the proposal of the Philippine government to impose a temporary ban on the sending of workers to Hong Kong:

Filipino migrants are angered by the exaggeration of the Philippine government through the Department of Labor and Employment with their proposed “ban on deployment” of Filipinos to Hong Kong. We view this as overreacting and simply a PR stunt since the current situation does not merit such a drastic policy. This proposal, if implemented, does not make us safe and will only result in financial loss and deprive many of their livelihood and employment opportunity. In fact, many feel that the situation in the Philippines is more dangerous with the Martial Law in place in some regions and with ‘death squads’ roaming the country and targeting mainly poor communities and people's rights defenders.

Elena observes that the protest movement this year got favorable media coverage compared to the ‘Umbrella Revolution’ in 2014. But she also notes some inconsistencies in reporting:

The coverage is highly focused on the confrontations between the protesters and the police. There is also too much projection given to the US and UK flag bearers in the protest making it appear that the people in general are supportive of the US and UK intervention when it is not really the case. The people are more angered by the HKSAR [Hong Kong Special Administrative Region] government's handling of the situation especially the police's brutality and excessive use of force in dealing with the protesters.

Finally, Elena has advice for the protesters: