Reducing carbon footprint and waste generation is the need of the hour, says Indian environmentalist

The solution is in sensitizing people to the dangers of pollution 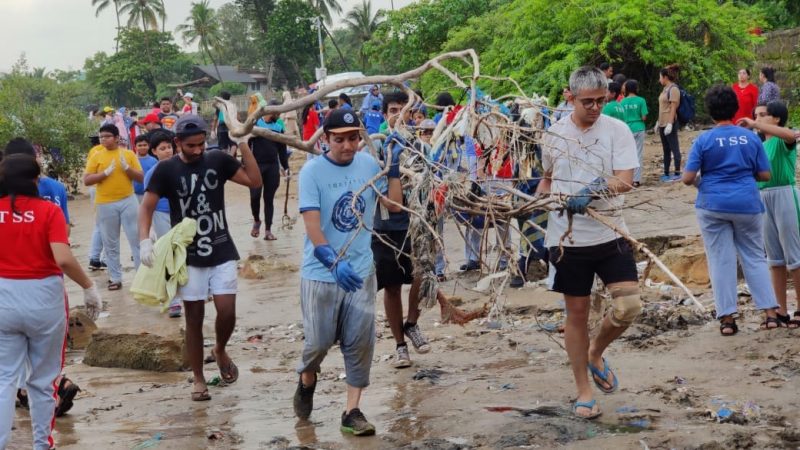 Indian lawyer and environmentalist Afroz Shah divides his time between the courtroom and separating mounds of plastic. Shah, prominently known for launching the world's largest beach clean-up drive in India's financial capital, Mumbai, won the United Nations’ “Champions of the Earth” award in 2016 and has successfully managed beach clean-up drives across India. From the initiative's humble beginnings as a clean-up drive with his 84-year-old neighbor, the Versova Residents’ Volunteers (VRV) now boasts having involved nearly 70,000 school students and 1,200,000 citizens in various clean-up initiatives.

Global Voices spoke with Shah about the dangers of plastic waste, the beginnings of the VRV initiative, and how social media has allowed him to turn a beach clean-up drive into a movement.

India produces over 62 million tonnes of garbage every year and landfills rank third for greenhouse gas emissions. For Shah, fossil fuels need to be phased out to protect the planet from climate change-induced destruction including flooding, heatwaves, and the reduction of forest cover:

Fossil fuels are a big problem and manufacturing plastic is a by-product of it clogging the environment. To tackle the climate crisis, youngsters need to step up and find solutions. Greta [a 15-year-old Swedish environmental activist] is keeping the politicians on their toes by frequently highlighting the current state of the environment which is suffocating everyone.

Shah added that enforcing laws will not yield results but rather sensitizing people about the dangers of pollution is the only solution. 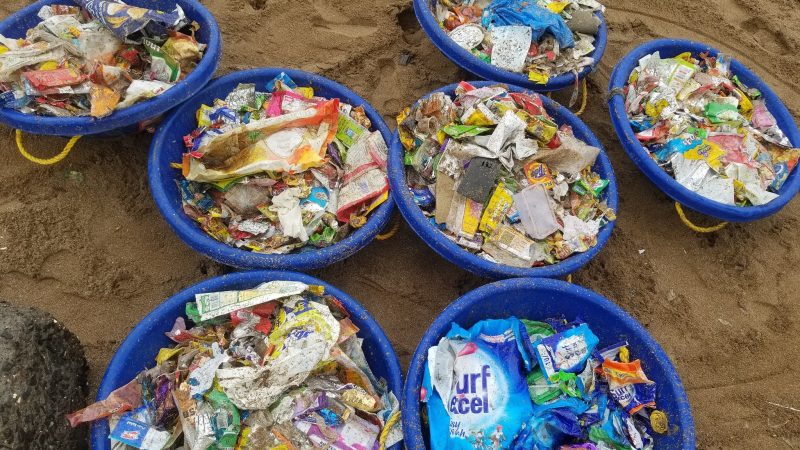 While looking for solutions to dispose of the plastic, I visited Dharavi since it is the largest slum with micro-enterprises in Asia. Socio-economic problems cannot be solved by just floating tenders and spending money. Instead of laws conversing with us, we should converse with people and decide what is good for our surroundings.

During his visit to Dharavi, Shah was alarmed by the amount of garbage, especially plastic waste, and how they ended up across the beachfront in Mumbai and other Indian states.

“People were burning plastic, which is dangerous. There was garbage and plastic everywhere and each piece of garbage had feces in it due to open defecation,” Shah said during an interview at his sea-facing apartment in Mumbai.

India's coastal zones are rich in marine and coastal life but decades of pollution, destruction of mangroves and plastic dumping on Mumbai's beaches have resulted in coastal degradation and the disappearance of many species including the native Olive Ridley turtles. Despite the environmental damage being done to the coast, Shah's initiative is already beginning to make a difference. In 2018, the Olive Ridley turtle was sighted at Versova beach. Shah, whose team of volunteers spotted the baby turtles wading their way through the sand, was ecstatic and in tears.

It was nature's blessing that Olive Ridley turtles returned to Mumbai's coastline after years of disappearance due to pollution and garbage dumping. I was crying when the news came out as we spent years wading through muck collecting tonnes of plastic and hoping to clean our environment. 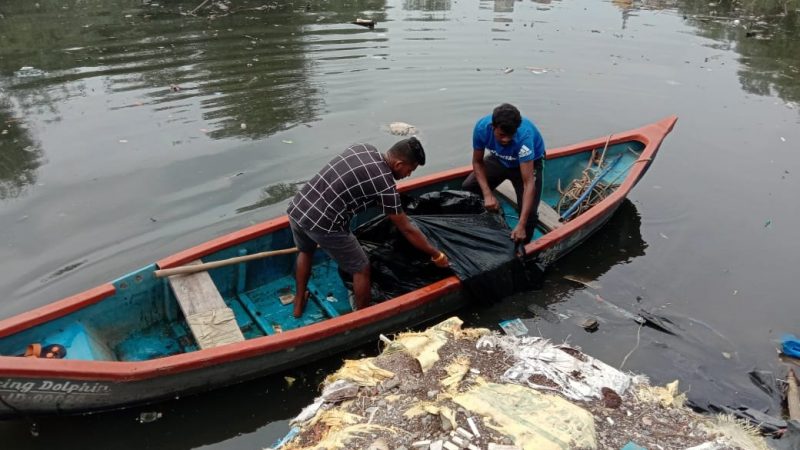 In 2016, United Nations Environment Project (UNEP) chief Erik Solheim visited a trash-filled Versova beach and said he had “never seen such a horrendous sight”. After his visit, Solheim announced support for the citizen's clean-up initiative led by Shah. By October 2018, the beach had been transformed with tens of thousands of volunteers chipping in their weekends to separate plastic for recycling.

Solheim went on to launch the global ‘Clean Seas ‘ campaign and joined hands with Shah's initiative.

Vijay Samnotra, head of the UN Environment’s country office in India, praised Shah and his volunteers in a press statement:

UN Environment is proud of the inspiring and mostly back-breaking work that Afroz and his small band of volunteers have been doing in Versova. He has shown how commitment and single-minded devotion of an individual to the cause of environment can mobilize citizens in conserving and protecting the environment.

But, Shah, who began his journey single-handedly realized he had to involve youngsters and citizens if he hoped for long-term sustainable change. As a social media novice who started out his clean-up drive with an 84-year-old neighbor, Shah initially approached people to help who were walking on the beach:

There is an inertia in the government and it is not responding as it should to our environmental needs. I started in October 2015 and there was barely any response from people as they would shy away. I wasn't social media savvy and would call 80-100 people on the phone every weekend requesting people to come and join us for cleanups. I would randomly approach people explaining them the problem of plastic dumping and destruction of mangroves and beachfront.

Eventually, the initiative was able to draw the attention of young people who joined in response to the environmental crisis. 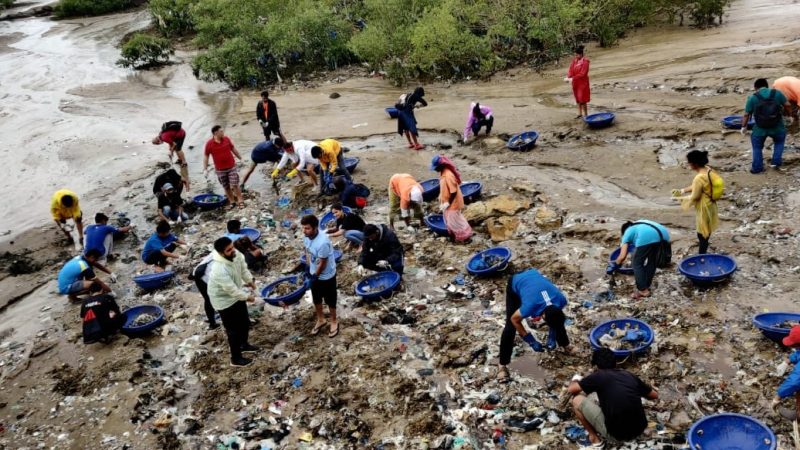 The beach clean-up was the tipping point and people moved out of their comfort zones and realized they need to start giving back to our environment. Shah, who lives a frugal lifestyle with minimal usage of plastic, says his teams have worked with local slum-dwellers in Mumbai to create awareness about sanitation, plastic usage, and garbage disposal.

There is a lot to be done for the environment and millions of species inhabiting the earth around us. The state of Mumbai is bad and every hundred meters has a garbage dump filled with wet and dry garbage and we dump these in landfills.

Despite the initiative's successes, the challenges environmentalists face are daunting and there is still much to be done.

Besides oceanic pollution, India also routinely deals with alarming levels of air pollution, one of the worst globally. Rivers surrounding New Delhi, the Ganges and Yamuna, face ecological threats due to the dumping of garbage and waste, with government campaigns to clean them yielding negligible results.

In 2018, amid Mumbai's incessant rainfall, the sea pushed back tonnes of garbage including plastic to polystyrene on the beaches highlighting how the city had turned the sea into a dumping ground. Besides this, a landfill in the Indian capital New Delhi's Ghaziapur measuring over 65 meters (213 feet) and Mumbai's Deonar landfill which are bursting at the seams is worrying officials.

Watch the United Nation's Champion of the Earth video featuring Afroz Shah below: