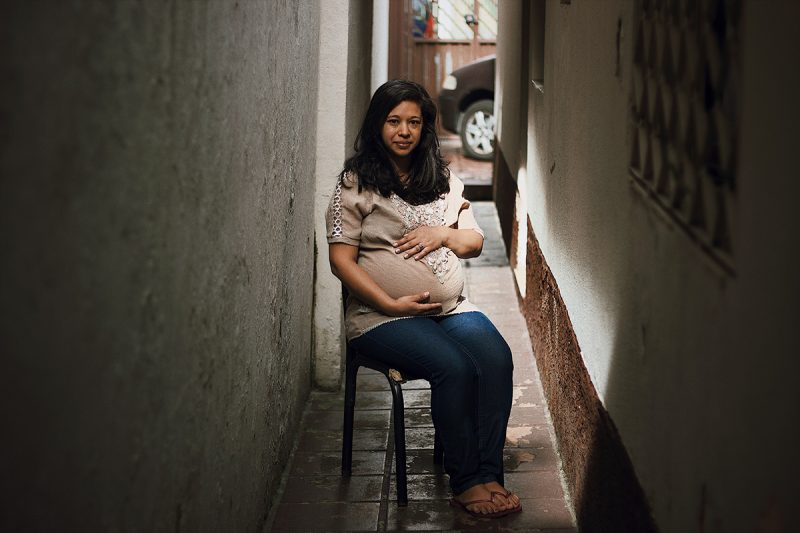 9 months pregnant, Janaína Normandia chose to have a humanized delivery in the second pregnancy after suffering obstetric violence in the first | Photo: Paula Rodrigues/32xSP

This story, authored by Jéssica Bernardo, Lara Deus, and Paula Rodrigues, was originally published by Agência Mural. An edited version is published below through a content partnership with Global Voices.

“But you had fun when you made the baby, right?” At the age of 23, Janaína Normandia was waiting for the birth of her first child when she heard those words from a doctor in a private hospital in São Paulo. Those words are among the several bad memories of that day.

After the birth was medically induced, Rafael was born. “They showed me my baby but then took him to receive assistance. I only saw the baby on Tuesday. He was born on Monday at 10:45,” she said.

So that experiences such as Janaína’s are not repeated, the Brazilian Ministry of Health established the Ordinance No. 569 in 2000, which guarantees a humanised, dignified and welcoming care for pregnant women and new-borns. “Humanised delivery” focuses on minimising medical intervention during childbirths.

For those living in the outskirts of São Paulo, however, this type of assistance is rare.

Sixteen years after Rafael's birth, Janaína is pregnant again and waiting for baby Benjamin. When she searched online for information about humanised childbirth, she found Casa Angela, a birth centre a few minutes from her home.

Located in the Campo Limpo district, in southern São Paulo, it is one of the area’s two free birth centres — along with the Casa do Parto of Sapopemba, in the eastern part of the city. Both are run by Brazil's public free health system SUS (Single Health Service).

The two institutions are specialised in performing natural and humanised births, following the recommendations of the World Health Organisation.

The centres are equipped with ambulances and specialised teams. Different to hospitals, those who assist the births are not doctors, but midwives with higher training in obstetrics, focused on techniques for caring for pregnant women. They are known as “professional midwives”.

Andressa Fontes Guedes, 27 years old, had her son Zion at Casa Angela, over 30 km from where she lives, in Jardim Apuanã, a northern area (Paula Rodrigues/32xSP)

The demand for these type of spaces has increased in recent years. In 2018, 440 deliveries were made at Casa Angela. This is 46 per cent higher than the previous year, when 300 children were delivered there.

However, despite the increased demand, the São Paulo city government has no plans to open new birth centres soon.

Home birth is not available in Brazil’s public healthcare system in general, but the Ministry of Health has requirements to pregnant women if they choose to give birth at home. These include that the woman should be accompanied by a professional midwife, and that she should have quick access to a maternity ward if she needs an emergency transfer. In this case, Casa Ângela is 10 minutes away from Campo Limpo hospital, which is the public referral ward.

Letícia Faustino, 23 years old, knows she's an exception as she's been able to deal with the costs. She decided to give birth at home, in the northern Parada Inglesa neighbourhood, and she spent R$ 7000 (about 1700 US dollars), paid in instalments, on a team including a nurse, two midwives and a doula assistant.

Doctor Melania Amorim, a specialist in humanised childbirth, says that “because it is not available as a public health policy, [home birth] is only accessible to those who can pay. For the woman from the outskirts, it will not be available in most parts of the country.

The World Health Organisation has recommendations for a positive experience of child delivery, such as having a companion during the process, allowing the mother to be fed and being hydrated, breastfeeding and contact between mother and child right after the birth, not using the “Kristeller manoeuvre” — pressure on the mother's abdomen to speed up delivery — or any methods to accelerate the process.

In practice, though, professionals working in the majority of hospitals and basic health units do not have training in humanised childbirth practices. For Melania Amorim, one of the great challenges for the public system in practising humanised delivery is the resistance of health professionals to change what was learned in the past.

“This happens exactly because people are perpetuating the model of childbirth assistance that they have learned on the college benches and which are characterised by interventions that are unnecessary and can be harmful,” she adds.

Analysing the rates of vaginal deliveries performed in hospitals, for example, it can be seen that in São Paulo’s five regions the rate of caesarean sections is higher than that recommended by the World Health Organisation, which is a rate of 10 to 15 per cent of all births.

Brazil is the country with the second-highest rate of caesarean sections, at 55 per cent of all births. In São Paulo, of the 69 places that delivered births, 34 were above the Brazilian average for caesarean sections.

Among the places with rates closer to the World Health Organisation’s recommendations, 83 percent were in the outskirts (29 hospitals or birth centres). The data are from a ranking published by the Municipal Health Office of São Paulo city covering all hospitals and institutions that had more than 50 deliveries in 2018.

Earlier this year, Jair Bolsonaro's Ministry of Health had vetoed the use of the term “obstetric violence” to describe cases of neglect in the care given by doctors before, during and after delivery. The argument given was that “neither the health professional nor those from other areas, have the intent to harm or cause harm”.

However, following the reaction of the Federal Public Prosecutor's Office, the government changed position and recognised the term’s legitimacy.

It has been argued over at a city level as well. For the coordinator of São Paulo city hall’s Women's Health program, Sonia Raquel Leal, medical staff are not trained to hurt a woman during labour.

“Are we [talking] about a social-political concept or are we in our area of action which is healthcare? I understand the term violence [to be] outside of healthcare”.

This is refuted, though, by legal professionals, women's rights advocates and women who have suffered some kind of mistreatment when giving birth.

Speaking on the outlet Lunetas, the lawyer Marina Ruzzi said the Health Ministry's position is inadequate because “one can see that the current ministry's concern is not to protect women and guarantee them their rights and assurances as citizens, but to protect the medical class from accusations of this nature”.

Pregnant women’s option for action when they have suffered some kind of abuse or disrespect is to communicate with professional team or file a complaint through the patient service portal 156 of São Paulo city hall.