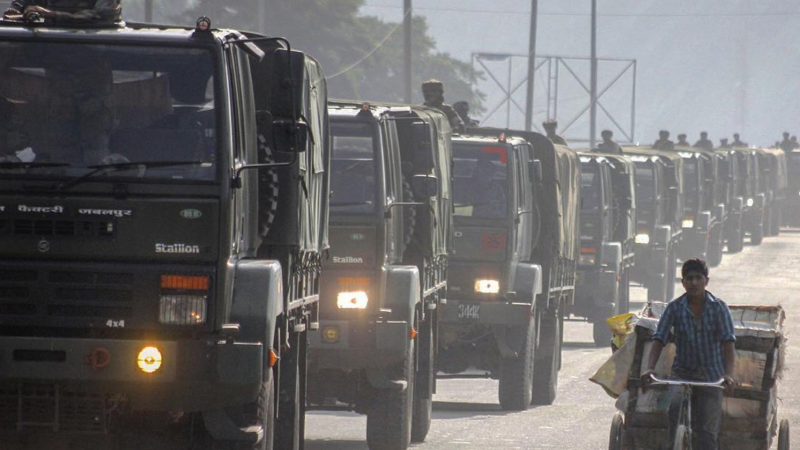 Ragpicker rides his bicycle trailer as an Indian army convoy moves near a gun-battle site in Pantha Chowk area, on the outskirts of Srinagar. June 2017. Image via Instagram by Ieshan Wani. Used with permission.

Thousands of Pakistanis reacted to the scrapping of Article 370 in Indian-administered Kashmir and the bifurcation of the region on 5 August 2019 with sporadic protests across the country. The Pakistani government soon responded with a series of actions to voice their disapproval of India's actions and to show support for Kashmiris.

After India announced its decision to revoke Article 370 which gave special governmental privileges to the Jammu and Kashmir territory, Pakistan decided to expel Indian High Commissioner to Pakistan Ajay Bisaria, suspend trade and airspace access, and downgrade ties with its neighbor. Pakistan also stated that it will not send its high commissioner to his post in New Delhi. According to Pakistan Foreign Minister Shah Mehmood Qureshi:

Our (Pakistani) ambassadors will no longer be in New Delhi and their counterparts here will also be sent back.

The move came after Prime Minister Imran Khan chaired a high-level National Security Committee (NSC) to discuss how to react to India's action in Indian-administered Kashmir. Khan's government also said that the country will challenge India's decision to abolish Article 370 at the United Nations, including the Security Council.

Nuclear-armed neighbours India and Pakistan have fought two wars over Kashmir. The most recent clash happened in February 2019 after a terror attack in Indian-administered Kashmir which killed more than 46 Indian soldiers. The dispute over Jammu and Kashmir territory goes back seven decades and both countries claim that Kashmir territory belongs to them.

Read more: Tension between India and Pakistan mounts after terror attack in Kashmir

Reactions from civil society in Pakistan:

Why doesn't @ImranKhanPTI now ask those 9,000 or 30,00 (according to PTI) supporters that gathered in Washington DC to lobby for Kashmir's human rights? The same for the UK

History will question us where were we when the children of Kashmir were being blinded; when daughters of Kashmir were dishonoured for political purposes, cluster bombs were thrown and integrity of Kashmir was being attacked. However, we have to stand firmly in that side of history where we can keep our head high in pride.

India has created new ‘reality’ in Kashmir like so many the Israelis created in occupied territory. 2 day displaced Palestinians R being punished for fighting against the new realities as D world has already accepted D original reality of forced occupation.

Leaders of left parties, civil society, and peace activists condemned the annexation of Kashmir by the Modi government and warned that a humanitarian crisis in Indian-administered Jammu and Kashmir could spiral into a dangerous conflict between India and Pakistan.

The leaders called for a joint response by the people of Pakistan and India for the rights of Kashmiris and peace in the region. According to Imtiaz Alam:

Kashmir has become a jail for the seven million people living under curfew for the last 12 days. It is important to focus on the Kashmiris’ rights.

PEMRA  invoked Section 27(a) of the Pemra Ordinance 2002. The International products mentioned by PEMRA for airing Indian talent in their advertisements include:

Solidarity with Kashmir rally organised at D-Chowk #Islamabad by ICTA (@dcislamabad) today to support Kashmiris in their right to self-determination. Pakistan dedicated its #IndependenceDay to Kashmir.#PakistanStandsWithKashmir #KashmirDeserveFreedom pic.twitter.com/7D4Ai0NKob