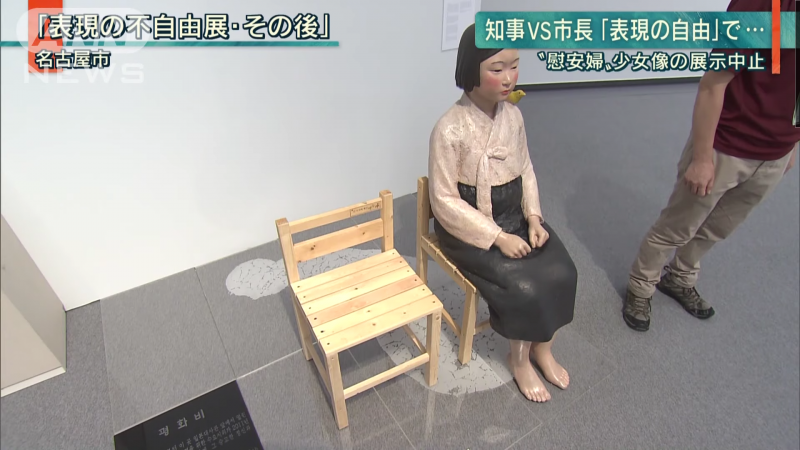 Statue of a Korean “comfort woman” from the cancelled “After Freedom of Expression?” exhibition at the 2019 Aichi Triennale.  Image captions: “Aichi governor faces off with Nagoya mayor over freedom of expression.” Screencap from ANN YouTube channel.

A controversial and now-canceled art exhibition at an internationally prominent arts festival in central Japan has led to government criticism, threats, at least one arrest, international protests by artists and questions about freedom of expression in Japan.

The canceled exhibition, titled “After Freedom of Expression?”, was just one of the works displayed at the  Aichi Triennale 2019, which takes place from August 1 to October 14, 2019 in Aichi Prefecture and features works from 80 international artists. Among the themes that works in the four festival programs of the Triennale attempt to explore is the power of art in the age of simulation, particularly over women's bodies.

The Aichi Triennale's controversial “After Freedom of Expression?” exhibition was in fact a follow-up to a previous show that explored topics deemed taboo by public cultural institutions in Japan. One of these is the issue of so-called “comfort women” pressed into sexual slavery all over Asia by Japanese government and military forces during World War II.

This year's edition of the “After Freedom of Expression?” exhibition featured a “Statue of a Girl of Peace” by South Korean artists that symbolizes the around 200,000 so-called “comfort women” conscripted, trafficked and enslaved by Japanese authorities. The artwork resembles similarly controversial statues in South Korea and the United States that have provoked heated recriminations from various Japanese commentators, politicians and far-right activists.

Aichi police have arrested a man (59) on suspicion of disrupting business activities after a threatening fax was sent to organizers of the Aichi Triennale in Aichi Prefecture.

This time, the threats began immediately after the “comfort woman” statue was unveiled on the first day of the Triennale on August 1. Besides a flood of hateful emails and phone calls, a Japanese man with a long history of anti-Korean hate speech, since arrested, sent a fax to festival organizers threatening to burn down the venue unless the statue was removed. In light of a recent deadly arson attack on a Kyoto animation studio that killed 35 people, organizers were forced to shutter the exhibit for several days.

However, Triennale organizers received even more criticism about the statue and other perceived anti-Japanese artworks, such as a video of a photograph of Japan's wartime Emperor Hirohito being burned. Kawamura Takashi, the right-wing populist mayor of Nagoya, one of the cities in Aichi Prefecture hosting the Triennale, demanded that the statue of the comfort woman be removed, calling it “factually incorrect” and a “waste of taxpayer's money.”

Omura Hideaki, the governor of Aichi Prefecture, accused Kawamura of censorship, but as chairman of the Triennale organizing committee, Omura announced on August 4 that both the statue and the “After Freedom Expression?” exhibit would be removed from the Triennale program because of safety concerns.

The organizing committee's decision to remove the statue and cancel the exhibition did not go over well with either Japan's arts community or the 80 artists invited to participate in the Triennale. By August 6, a group of artists had called on the Triennale to remove their work from the show.

In an August 6 open letter posted to Facebook, 72 of the over 90 participating artists decried the decision to close that show, deeming it censorship. A week later, nine of the artists have called for the removal of their artworks in the Triennale for as long as “After ‘Freedom of Expression?’ ” remains closed, “as a public gesture of solidarity with the censored artists.”

There are also questions about the manner in which the decision to close the “After Freedom of Expression?” exhibition was made. Triennale artistic director Tsuda Daisuke, a well-known journalist in Japan with 1.6 million followers on Twitter, accepted most of the blame for what happened.

In an August 6 interview, Tsuda expressed regret for having caved in to outside pressure, saying, “I ended up setting a bad example by scrapping a cultural event due to an attack by phone calls […] I have to accept criticism that I should have expected much worse than what I was prepared for.”

But Tsuda's initial apology did not end the recriminations, nor mollify the concerns of the participating artists who wished to withdraw their works from the Triennale. In a long Medium post published on August 15, Tsuda acknowledged that the decision to remove the statue and the controversial exhibition from the Triennale was made unilaterally, and did not take into account nor respect the wishes of the artists involved.

When the controversy first erupted at the start of the exhibition on August 2, Tsuda lamented in a statement on the Triennale site that the pressure to remove the statue and close down the exhibition would:

[…] Demonstrate to our citizens–and to the world–that Japan's current social climate does not allow for discussions about the state of our country, or about the darker aspects of its past. We hope the offending parties will take this into account and consider the gravity of their actions.

Tsuda later argued that he did not think the statue nor the exhibit, which explore Japan's behavior in wartime, are “anti-Japanese”:

In most countries and societies, the government, the military, or the people themselves have a tragic or negative history of repressing the human rights of their own people and others. However, many countries and societies reflect on their shared history in order to not repeat it, and instead try to live and act soas to be respected by their own people and by other nations.

I believe the same goes for our Japanese society.

The Aichi Triennale continues until October 14.