Indian-administered Kashmir is like an ‘open prison’, says observers

Jammu and Kashmir has been on lockdown since 5 August 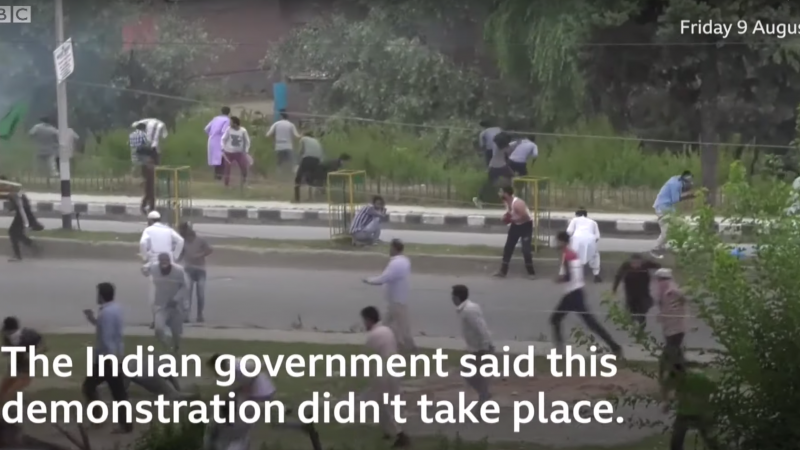 Since 5 August, Srinagar, the main city in Jammu and Kashmir, has been under complete lockdown after the central government of India voted to annul the region's special status. This move scrapped article 370 which guaranteed a certain level of autonomy such as the right to a constitution and the ability to make laws. The new status also splits the region into two federal territories. The central government sent in troops and shut down internet access, essentially isolating Kashmiris from the outside world.

Although the Indian government has been insisting that the region is slowly returning to normalcy, a recently released report criticizes the “occupation” of Kashmir and urges the government to “return democracy to the region”.

The report was produced by a group of Indian activists and members of leftist organizations, including Indian economist and activist Jean Drèze; Kavita Krishnan, the secretary of the All India Progressive Women's Association (AIPWA); Maimoona Mollah from the All India Democratic Women's Association (AIDWA); and Vimal Bhai of the National Alliance of People's Movements (NAPM). From 9 August to 13 August the activists traveled extensively inside Kashmir and their findings were a stark contrast to the central government's version of the situation:

Situation ‘not normal’ in Jammu and Kashmir, claim activistshttps://t.co/K9sn5ijD1D pic.twitter.com/5iNEBAYynN

#KashmirCaged
Jean Dreze, @MaimoonaMollah @vimalbhai11 and I spent 5 days traveling extensively in Kashmir, speaking to people. Kashmir Caged is a short film with some of the voices we spoke to, with English subtitles. @RoadScholarz https://t.co/YMu04HDQmE

Jean Drèze said the clampdown had “crippled economic life” there. While Vimal Bhai said, “Kashmir is like an open jail.” Although the 4 million residents of the Kashmir Valley are used to blockades and curfews due to a long period of insurgency and protests, the group called this situation unprecedented.

Earlier this month, the government brought thousands of troops into the valley to help impose restrictions. Thousands of people, including tourists and Hindu pilgrims were asked to leave Indian-administered Kashmir citing a terror threat.

By 5 August 2019, the authorities put hundreds of political leaders and their aides under house arrest and restricted them from speaking to the media. Roadblocks were put on the streets and restrictions on almost all movement were strictly enforced. Mobile, landline and internet facilities have been blocked since then.

The restrictions were relaxed on Monday, 12 August for prayers to mark Eid al-Adha but ended with protests spilling out from mosques into the street.

An Indian Supreme Court refused to pass an order revoking the clampdown in Jammu and Kashmir, including restoring all communication services in the region.

Two sides to the story

People are debating whether the Indian mainstream media is covering the situation in Kashmir properly. The Indian government and its many supporters have been trying to push back against reporting by foreign news organizations. On August 9, BBC's coverage was questioned for reporting that the police opened fire and used tear gas to disperse the crowd in Soura, Srinagar. The Indian government said that the protest did not take place and there was no open fire, and trolls accused the BBC of spreading fake news.

#Situation in the #valley was #peaceful #today. No untoward incident has been reported so far. @JmuKmrPolice @diprjk

Latest Visuals from Srinagar, Situation is quite NORMAL in the valley.

Devjyot Ghoshal, a journalist of Reuters India from Kashmir tweeted:

I wasn't inclined to tweet about #Kashmir, but after seeing the amount of disinformation, I am going to.

I'm back in the newsroom today after a week in Srinagar.

Things are NOT normal.

People are seething. Kashmir is likely a tinderbox waiting for a spark.

Returned from #Kashmir today after 4 days. It was hard to convince parents to leave home in such situation. I have never seen such information blackout. nobody know what is happening. Extremely hard circumstances 4 journalists 2 report. My thoughts with my friends, neighbors. pic.twitter.com/n0hA38Upoy

This Independence Day, Can We Restore Our Freedom of Expression? asks @RevatiLaul about @PressClubOfI1 denying us permission to screen our video. “What cd the stopping of video do in the end, in the face of these stories they told? Words can make us see.” https://t.co/nUR4jpVDHy

What is happenning in Kashmir is ‘normal’ in the sense that state-backed violence, deceit and lies, gag on civilian voices, and govt propaganda have always been a ‘normal’ in Kashmir.

By the standards of democracy, decency and human rights, this isn't normal. No justification.

This report shows how over a million people are living during the security siege of Srinagar. In a New York Times op-ed, Indian writer Arundhati Roy criticized the Indian government for turning all of Kashmir into a giant prison camp.

The government said the restrictions will gradually be eased, and so far, they have succeeded in silencing dissenting voices. However, according to reports, there is growing fear of a brewing backlash from the people of Kashmir when the restrictions are lifted.