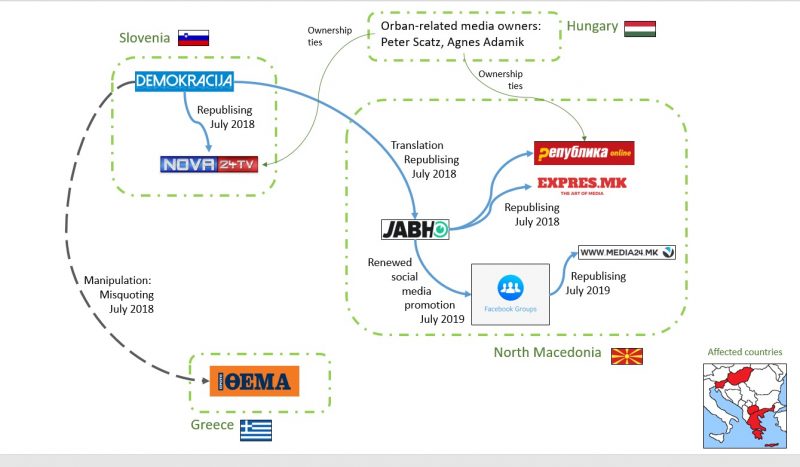 Diagram depicting the multi-country trek by a story claiming the EU bribed the prime ministers of Greece and North Macedonia. Illustration by Meta.mk News Agency, CC-BY.

In July 2019, Macedonian social media was flooded with links to year-old articles claiming the prime ministers of North Macedonia and Greece, Zoran Zaev and Alexis Tsipras respectively, received billions of euros in bribes to sign the Prespa Agreement.

Reached in June 2018, the Prespa Agreement put an end to a 27-year-old dispute between the two neighbors. Macedonia agreed to change its name to North Macedonia, and in exchange, Greece has pledged not to object North Macedonia's accession to NATO and the European Union (EU). Both Macedonian and Greek nationalists have historically opposed the agreement, which they consider treasonous and contrary to national interests.

Although the EU bribe article was published a year ago, it resurfaced in North Macedonia recently, most probably surfing on tension around a recent political scandal in which public prosecutors allegedly took bribes from officials investigated for corruption.

Fact-checkers in North Macedonia have traced the original source of the EU bribe article and uncovered a complex trail of disinformation spanning at least four countries.

The false claim was first made in a story published by a Slovenian website called Demokracija.si on July 9, 2018, and was then republished by Nova24TV, also a Slovenian outlet. Both are part of a Slovenian media network that received an infusion of capital by businesspersons associated with Hungarian Prime Minister Viktor Orbán. Their editorial policies are known to be closely aligned with the views of the right-wing Slovenian Democratic Party, led by Janez Jansha, who is also an ally of Orbán within the European People’s Party.

The Demokracija.si article, headlined “This is how the Left is doing business: Zaev sold the Macedonians for 30 billion euros” and consisting of only two paragraphs, claims that the EU bribed Zaev and Tsipiras to sign the Prespa Agreement. It cites as a source Proto Thema, a reputable center-right Greek newspaper.

Proto Thema had indeed published a news story on July 6, 2018, in which Greek MP Dimitris Kamenos is quoted as saying that, as an incentive for signing the Prespa Agreement, the EU would provide North Macedonia with 30 billion euros and Greece with one trillion euros worth of projects and investments.

As the story makes it clear, those are potential investments for the countries, not personal bribes for their prime ministers.

Here's what the Demokracija.si article says:

After Greek Prime Minister Aleksis Cipras and Macedonian Prime Minister Zoran Zaev reached an agreement on a new name for Macedonia (Republic of North Macedonia), everyone wondered how they could have agreed so quickly on something that has been at the heart of a dispute lasting 27 years. Greek newspaper Proto Thema now writes that the prime ministers were bribed.

Cipras and Zaev, both declared and die-hard leftists, sold their peoples for money. According to Proto Thema, Macedonia will receive 30 billion euros (three times the amount of Macedonian Gross Domestic Product) from the EU in the form of projects and investments, while Greece will receive an incredible trillion of euros.

In North Macedonia, the first outlet that has picked up on that story was the portal Javno.mk, which translated the Demokracija.si article verbatim while adding an unflattering image of Zaev. This article was quoted as a source by several right-wing Macedonian media and social media celebrities in July 2018, and again one year later in July 2019. 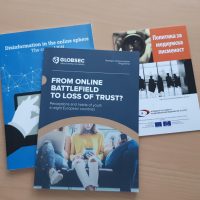 Report by GLOBSEC that identified Javno.mk as a purveyor of disinformation. Photo by Meta.mk News Agency, CC-BY.

The research paper “From online battlefield to loss of trust? Perceptions and habits of youth in eight European countries” by Prague-based think-tank GLOBSEC, published in October 2018, identified Javno.mk as an example of a “disinformation website” in the Macedonian online space (pg. 16). The website Javno.mk has no impressum and its ownership is not publicly disclosed.

The Javno.mk article was quoted by other North Macedonia's outlets that are considered to be mouthpieces of the right-wing populist party VMRO-DPMNE, such as Republika and Express.mk. The Republika article has since been removed from their website, but a trace that they had published it remains on the Daily.mk aggregator.

In May 2018, the investigative outlets BIRN and OCCRP uncovered that the Hungarian owners of the mentioned Slovenian websites have also purchased Republika and other similar media in North Macedonia around the same time when they made those investments in Slovenia.

An analysis by CriThink.mk, a fact-checking initiative from North Macedonia, noted that the old bribe story was shared on several Facebook groups. “The posts in these groups, which have several thousand members, received several dozen likes, comments and even more shares each. Many of the comments are very negative, including insults and hate speech,” its report says.

The content of those groups, with names such as Здраво Македонијо! (Hello Macedonia), Makedonski Nacionalni Interesi (Macedonian National Interests), and ГОРДОСТ Е ДА СИ МАКЕДОНЕЦ (Pride “in” being Macedonian, in a loose translation) tends to revolve around hostility to the current government, support for the opposition party VMRO-DPMNE, nationalism. Stories from dubious news sites often circulate on those groups.

Besides the many Facebook users who shared the link via their personal profiles, at least one online outlet, Media24.mk, republished a verbatim copy of the year-old Javno.mk article on July 14, 2019. This site has no Impressum nor disclosed ownership.