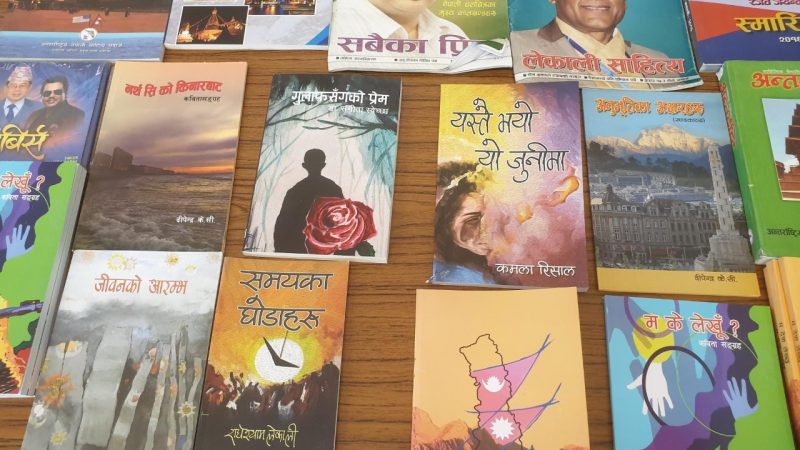 Dr. Sangita Swechcha is a Nepalese literary figure based in England whose poems, stories, and articles have been published in both Nepal and the United Kingdom. A few of her poems have also been aired on Radio Nepal and telecasted on Nepal Television. She has also published a joint collection of stories, ‘Asahamati ka Pailaharu’ and ‘Gulafsangako Prem’  in Nepali.

Her first novel, ‘Pakhalieko Siundo,’ which she wrote at the age of 18 received excellent reviews from literary critics. The novel focuses on the emotional journey of a Nepalese woman, Sandhya, and delves into her pain, suffering, and determination to overcome her past. It also highlights the issue of human trafficking in Nepal. Global Voices talked to her about her work and literary inspirations:

Global Voices: When did you start writing?

Dr. Sangita Swechcha (SS): I do not remember the exact year, but I started writing when I was 12 or 13-years-old. I don’t know whether they used to be poems or not, but I just used to express in writing whatever I felt. I used to be a shy and introverted girl and mostly sitting quietly and listening to others than talking or expressing to others. I felt comfortable expressing in writing than to people and those used to be in the form of poetries initially.

GV:  Who inspired you to write in the Nepali language?

SS: [The] Nepali language is the national language of Nepal and, being a Nepali, I always felt more comfortable writing literature in Nepali than expressing myself in English. I do not remember how I got into writing, but my mom and dad were always supportive of my writings. Initially, I did not use to share with my parents. It took me a few years to tell my parents that I loved writing and that I had been writing for quite some time. While in early teens, I used to hide or tear my writings. I think the nature around my house was an inspiration initially. I was and I am still fascinated by the beauty of nature.

SS: My novel ‘Pakhalieko Siundo’ is about female tolerance for pain and suffering, and how circumstances make women powerful. It also tells stories of women who are destined to be sold by their relatives or lovers. It is a story of a strong woman who, despite all the hurdles of life, fights to survive and remains strong, carrying on in her life and achieving her dreams. 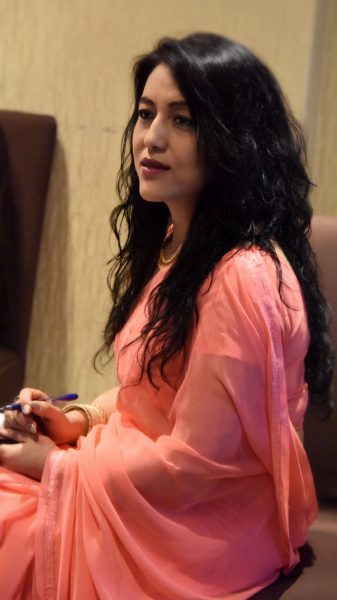 I published this novel when I was 18-years-old, after completing my I.Sc. [equivalent to grade 12] from St. Xavier’s college in Nepal. While I was waiting for my result, I had nothing to do and thought of writing a few stories. I started writing one story and got so engaged that I kept on writing. It turned into a 265-page novel. I am still amazed at how I managed to write that long a novel at that age. When the writing was completed, my father encouraged me to get this novel published. I feel that my parents’ support during my initial days were very crucial for me to dream of becoming a writer. I was also very fortunate to get appreciation and love from Nepali media, critics, and readers after publication. I was more into literature and actively involved in literary activities in Nepal for quite a few years afterward. One such activity was the publication of a literary monthly magazine ‘Aakash’. I worked as a sub-editor for the magazine then. Publication of my novel also got me into writing for various national daily and weekly newspapers and magazines in Nepal, and I started getting offers to write columns and reporting. My novel is currently on air every week from Capital FM 96.4 MHz and I am very happy that it is going to a larger audience in Nepal and abroad (via live Online radio and YouTube versions). I am also working on the second edition of this novel, and I hope to have a translated version in English in the near future.

GV: How do you look at the state of Nepalese literature in the 21st century?

SS: Literary writing in the Nepali language only began in the 19th century. Before that, Nepali literature was in Sanskrit. The first written literary work in Nepali was Bhanubhakta’s Ramayana (1883). In this sense, Nepali literature has a history of more than a hundred years. Literature from different genres has been published during this period and has grown rapidly in numbers in the 21st century. Not only are these numbers growing, but the quality of literary writing in Nepal is also improving. Moreover, versatile books from different genres which incorporate a variety of innovative styles and approaches are published annually. Since most of these are written in Nepali, the external world doesn't know much about how rich Nepali literature is. In this sense, Nepali literature seems to be a bit isolated from the external world. However, the situation is changing now. Not only is [the number of] Nepali writers who write in English slowly growing but the translation of literary works from Nepali to other languages is gaining momentum too. I believe that with this changing trend people will get acquainted with Nepali literature and Nepali literature will have more exposure to the external world as well.

Moreover, in today’s globalized world, Nepali writers are spread around the globe. In order to bring Nepali writers around the world onto one common platform, institutions like the International Nepali Literature Society (INLS) were established. INLS has chapters in more than 80 countries. A recent INSL conference in London is an example of how more than 100 Nepali writers residing in 12 different countries gathered to show their commitment to the progress of Nepali literature by encouraging both Nepali diasporic writers and writers residing in Nepal. The conference also launched a collection of short stories in English named ‘Silver Cascade’. The book, published by Book Hill publication in Nepal, consists of short stories by notable writers. We hope that Nepali translated literature gets attention and love from readers in the international market, and are looking forward to seeing more of such publications. In the meantime, my story collection book, ‘Gulafsangko Prem’, is also in the process of being translated into English.

The interview with Dr. Sangita Swechcha was done via email.