The scale of the violence was never widely broadcast 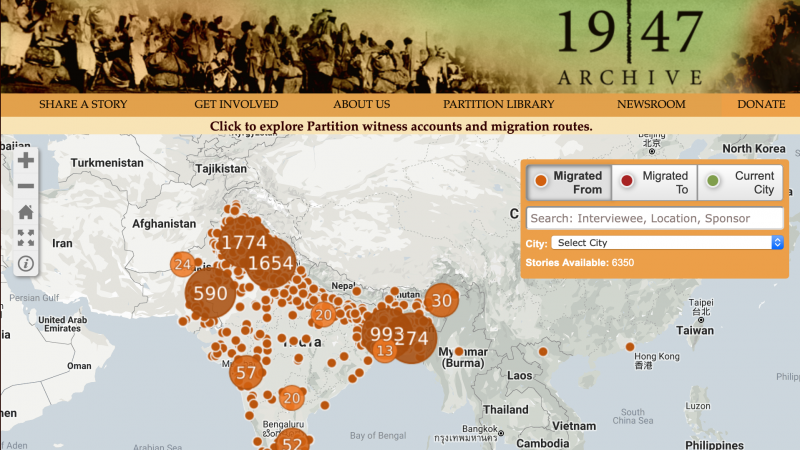 Nobody knew what the liberation of India from British rule that took place in the summer of 1947 would bring, but few would have expected its legacy to be a violent separation that would displace 14 million people and result in decades of rivalry between what would become two nuclear states.

Every August since, in both India and Pakistan, school children sing anthems, politician make speeches, and the military parades to celebrate not just the two nations’ independence from the British Raj, but also their ‘partition’ from each other on August 14-15, 1947.

The partition took place when the British, already struggling with an expensive, overextended empire after World War II, announced that the region, which was growing increasingly volatile with sectarian tensions, would become independent. Just a year prior, mass sectarian riots had taken place between Hindus, Sikhs, and Muslims on the streets of Calcutta that killed 4,000 people in a span of 72 hours.

Tasked with the drawing of the new borders was a British lawyer who arrived in India on July 8, 1947, on his first ever trip to the region. He completed the task in a few weeks. The result was the birth of Pakistan, with its eastern and western parts on either side of the newly liberated India. 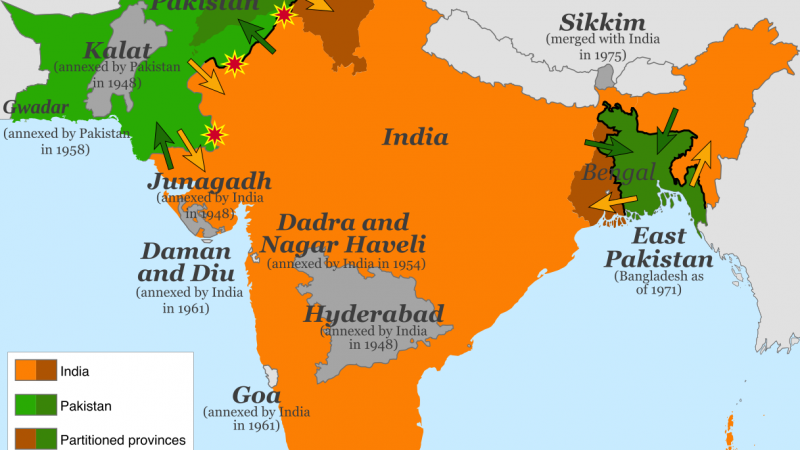 Map of the partition of India (1947). Click on image for larger version. Image via Wikipedia. CC BY-SA 4.0

To the confusion of many historians today, mass violence broke out immediately as an unprecedented population exchange began across the freshly drawn borders. Hindus and Sikhs began relocating to what was now India, and Muslims to the newly created Pakistan.

Anchal Malhotra, an India-based oral historian who has been studying the partition of India since 2013, says:

I think it's interesting that an entire population can be forced to migrate to a place where they don't want without quite understanding what was happening. 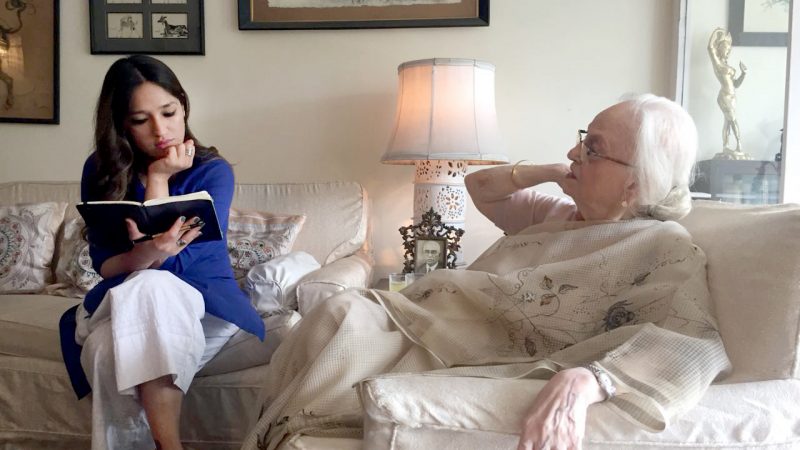 My grandmother said once to me: ask me quickly before I forget. Otherwise it would die with me, she said. As if she was just waiting for me to ask her her story. And I'm glad that there are people that are brave enough to talk about what happened because partition continues to be a wound in so many people's minds and hearts.

Within a span of two months in the summer of 1947, the United Nations High Commissioner for Refugees (UNHCR) estimates that nearly 14 million people left their homes. Estimates of the number of people killed  during that time range between 200,000 and 2 million.

You know, people always say in interviews that there was a madness in the end. Nobody understood what was happening. One day you were in India and the next day it was called Pakistan, but you had to leave. I think that the sense of misinformation is quite staggering.

But the scale of the violence was never widely broadcast. According to Faisal Choudhry, a professor of South Asian history from Pakistan, one possible reason for this is that official versions of the events were written by the British:

They wanted to portray independence. . . as a victory for everyone and to show that the British, after 200 years of colonial rule, were departing on a positive note. Highlighting the bloodshed — and the intensity of it — would take away from that. 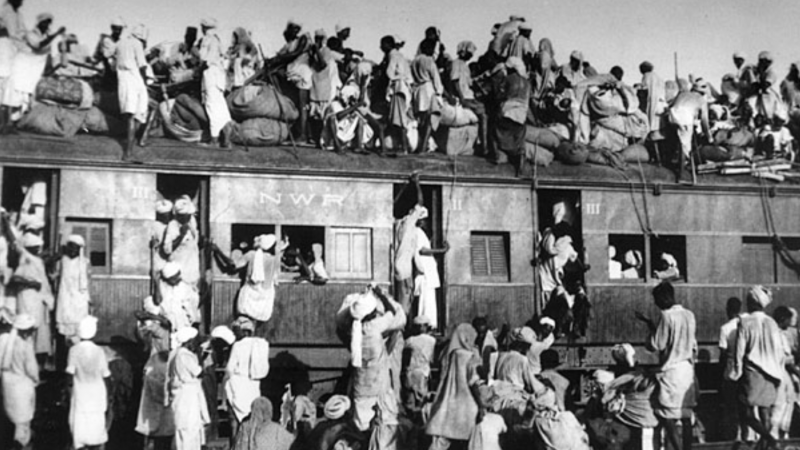 Regionally, it could also be because both India and Pakistan have still not worked out how to discuss those horrors in a way that doesn’t question partition, he adds:

Both countries, as they are today, wouldn’t exist if the partition didn’t take place, which might be why their official history records don’t dwell too much on the horrors that took place. And as for the people who lived through it —and are still living through it — maybe recalling raises questions that nobody has the answers to. Why did madness take over completely suddenly?

Historians such as Malhotra are working on getting the remaining survivors of the partition to recall the events so their stories can be preserved.

Obviously, the academic history or the official histories that we learn in our textbooks are not as inclusive as we would like them to be, and I think at some point what they also do is to put every experience of partition under the blanket.

Archivists, both professional and amateur, are collecting video and oral testimonies of the horrors that capture the depths academic history have missed.

One of the largest ongoing projects is a collection of oral histories that, on completion, will include at least 10,000 oral interviews from surviving witnesses. Over 8,000 interviews have already been conducted and over 30,000 digital documents and photographs collected from survivors of the Partition over the span of seven years. 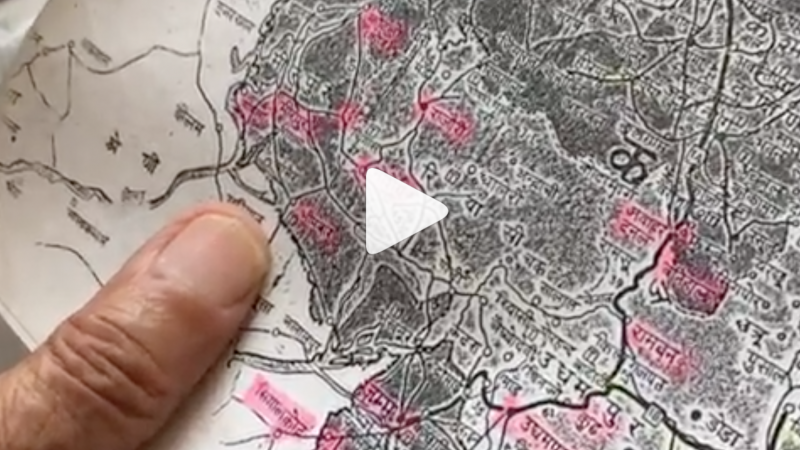 “A map of the past, a map of happiness, a map that belongs to my generation alone. I close my eyes and I can see it. This was my house, this was my city, this was my state.” From Anchal Malhotra's Instagram post. Used with permission

The interviews—a portion of which can be streamed on Stanford University Library’s Digital repository—are a part of the 1947 Partition Archive’s collection, which gathers crowd-sourced oral histories through an online platform.

Preserving this history will help us understand why and how the largest mass migration in history happened, why it was so violent, and what its impact has been on the lives of those who lived through it and for the region as a whole. It also helps us capture the social and cultural world lost as a result of that migration. It helps us understand the formation of Pakistan, Bangladesh, and modern India, and the national and religious identities of those who live in these countries as well as the conflicts within and between them, including the struggle over Kashmir (and its nuclearization).

While it is uncertain whether a more nuanced look at the shared history of Pakistan and India can bring a fresh perspective to future relations between the rivals, archivists are, understandably, in a hurry to record the accounts of the survivors of an incident that took place 72 years ago.

Note: Interviews for this story were conducted via email and phone.