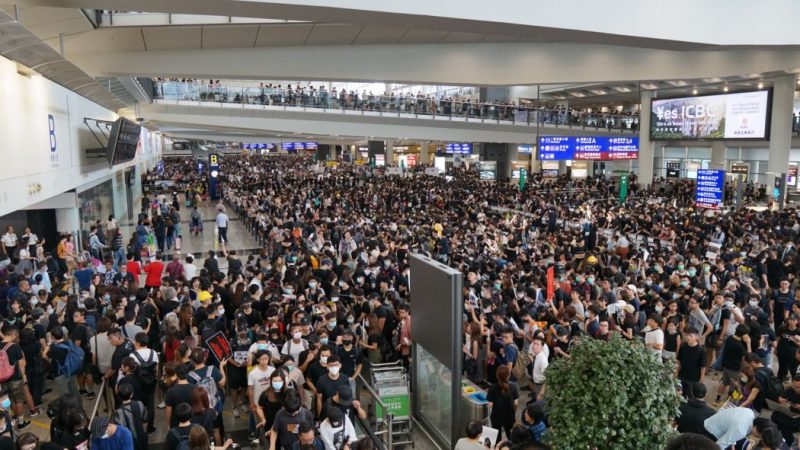 Clashes between protesters and police have reached a fever pitch as the Hong Kong government initiated a city-wide crackdown on anti-extradition protests on 11 August. 54 protesters were sent to the hospital in a single day, one woman was shot with a projectile in her eye and many have reported fractured bones.

On 12 August, Beijing’s Macau and Hong Kong Office held a press conference stating that the protesters’ actions show “signs of terrorism”. This latest move has led protesters to fear the potential escalation of violence in response to the “terrorism” label and is another incident that brings Hong Kong closer to a boiling point.

Riot police launched an aggressive city-wide arrest campaign in several districts across Hong Kong and the police violence was recorded in a video. The incidents documented in the video show a young woman shot with a projectile in her eye in Tsim Sha Tsui, a young man who had lost his front teeth begging riot police not to push him onto the ground during his arrest in Tsim Sha Tsui, and riot police firing tear gas in a subway station and fire projectiles at protesters at a close range in the Taikoo subway.

Medical staff at more than a dozen public hospitals stage a sit-in to protest against police brutality & the HK govt's continued refusal to offer any kind of political solution.

There's no way Carrie Lam can say w a straight face that these medics have “no stake in society.” pic.twitter.com/5oITnakjDm

Thus far, Beijing has refused to make peace with protesters and stated that Hong Kong’s protests showed “signs of terrorism” in a press conference on 12 August.

Hong Kong’s legal expert Cheung Tatming pointed out that such a definition would empower the police authority to use force against protesters without any constraints or consequences.

June 4 is happening in Hong Kong. The bloody crackdown is extending and you cannot see the border or a definitive sign in Hong Kong’s version of June 4. Armed police [from mainland China] will join forces with HK riot police, they will fire tear gas and bean bags at close range, they will beat protesters up without any constraint. The new era of June 4 is to turn a major crackdown into many many small incidents. If we says June 4 is a war with a battlefield, the repression of the current protests is characterized with anti-terrorism strategies, the crackdown will be decentralized ad gradually escalating. It gives people a feeling that the war has not come, but people are already inside the war. You can’t find where’s the borderline of this war because it doesn’t exist. The Hong Kong repression model is a degree zero war, it just keeps escalating and Beijing will bring in more and more soldiers. What’s more armed police and PLA from mainland China are using imperialist iron hand suppression strategy, the legitimacy of such violence is built upon regional and ethnic divides.

Piling up of incidents

Some of the above anticipation can also be observed in the latest airport conflicts where tens of thousands of protesters have been staging a sit-in, causing the international air hub to shutdown.

The peaceful sit-in which had started since July 26 was considered as a great success to exhibit and explain the Hong Kong anti-extradition protests to the world. But two of the incidents took place on August 13 and shifted the track. A group of protesters seized a suspect mainland Chinese cop. A few could not control their rage, beat up the “cop” and attempt to stop the medical staffs to escort him away. Later, airport police stepped in and the chaos almost resulted in gunfire.

The other conflict involves a dozen protesters attacked and tied up a man who took photos of protesters. The man told the protesters he was a police supporter and invited them to beat him up. Then the protesters found the blue t-shirt wore by Beijing loyalists in Tsuen Wan on August 5. Later Global Time chief editor Hu Xijun revealed on Twitter that the man is a Global Time reporter and the incident has gone viral on mainland Chinese social media, igniting a large number of revengeful comments.

The above two incidents have not only resulted in a shift of public opinion against the protesters but also triggered an intense internal debate among protesters. More and more protesters are calling out for a reflection on their campaign strategy as they respond to China’s new repressive model in Hong Kong.

In the meantime, the protests continue with the Civic Human Right Front calling for another mass rally on 18 August.