Is it an epidemic — yet? A mother and child recover from malaria in a hospital in Burundi. The Burundi government provides free health care for pregnant women and children under five, Burundi, March 12, 2009. Photo used with permission from UNDP via Flickr CC BY-NC-ND 2.0.

In Burundi this year, malaria has already affected 5,738,661 million people — that's about half its population, according to the World Health Organization (WHO) and the United Nations Office for the Coordination of Humanitarian Affairs (OCHA). By July 21, 1,801 people had died of the virus, according to Burundi's Ministry of Public Health.

Malaria, a mosquito-borne disease caused by a parasite, has long afflicted Burundians and the entire East African region, but this is a marked increase since earlier this year and a 97 percent increase compared to the same period in 2018. 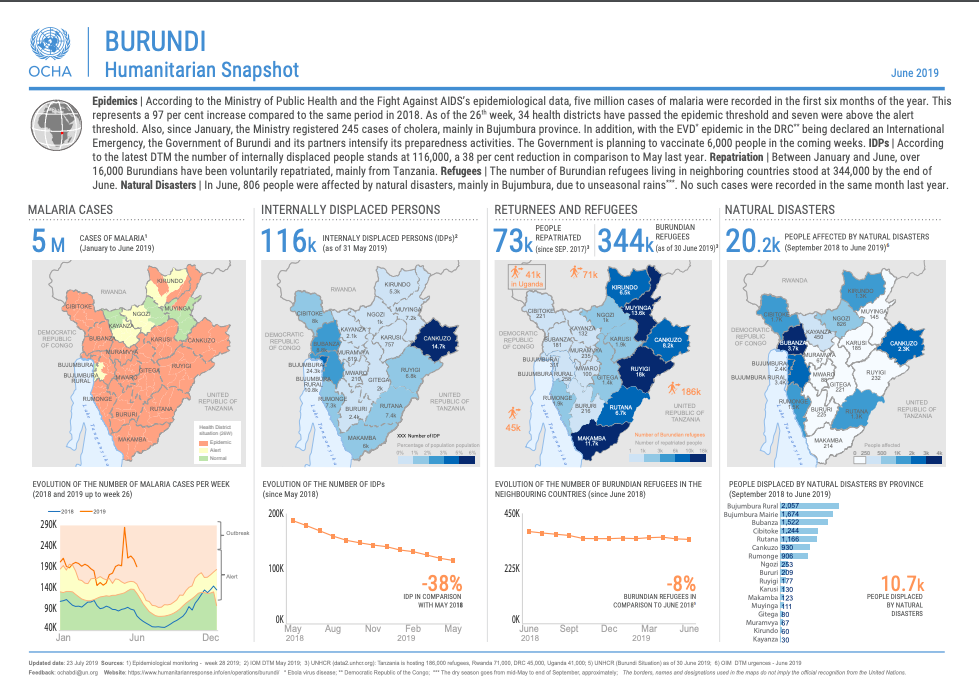 According to the Ministry of Public Health and the Fight Against AIDS’s epidemiological data, five million cases of malaria were recorded in the first six months of the year. This represents a 97 percent increase compared to the same period in 2018. Screenshot from United Nations Office of Coordination of Humanitarian Affairs.

Yet, the government is not ready to call the malaria crisis an epidemic:

Authorities in #Burundi must swallow their pride and declare malaria as a national disaster. People are dying and no one seems to care. When will wake up, it will be late. Mark this tweet.

Burundian YouTube child star Kacaman drew attention to the plight of thousands suffering from malaria when the 6-year-old succumbed to the disease:

Does it have to take tragedy to drive change? The death of 6 year old YouTube star Kacaman draws attention to #Burundi, where more than 1,800+ people have died from #malaria this year according to #WHO #EndMalaria. https://t.co/ywD3ks1ylj

Radio France Internationale reported a health worker anonymously saying health centers have been overwhelmed by the demand, and that if the government declared an epidemic it would better facilitate assistance for people with healthcare costs.

Iwacu newspaper described the situation of one clinic in Giheta, Gitega province, in July, struggling to deal with the increased number of cases, with 90 percent of patients suffering from malaria — mostly children. Hundreds of patients per month have been taking up space, sharing beds and waiting in long queues, which puts high pressure on staff.

WHO said among the drivers were low use of preventive measures such as mosquito nets, climatic changes allowing mosquitoes to reach higher altitudes (in a mountainous country), increased rice growing in recent years (with a lot of still water where mosquitos can easily breed), public sanitation problems in urban areas and changes in mosquito behavior. WHO called on all stakeholders for a “robust response.”

Franck Arnaud Ndorukwigira, a Burundian blogger with the Yaga website, reported doctors in the country saying poverty is another factor impeding prevent. He referred to a World Bank statistic that 74.7 percent of Burundians live in poverty, making it difficult to afford healthcare. Malnutrition and weak immune systems make it harder to survive a bout of malaria. Sometimes, mosquito nets are used for fishing instead.

The government has made some efforts to address the issue: They have provided anti-mosquito sprays, some free medicines particularly for children under 5, and mobile clinics to hard-to-reach rural areas. The government intends to distribute mosquito nets widely in 2020. However, OCHA noted a “lack of human, logistical and financial resources for effective response.”

Health Minister Thaddée Ndikumana has avoided declaring an epidemic, though. He countered these reports by comparing the situation to higher numbers recorded in 2017 – when the government declared an emergency situation. Yaga blogger, Honoré Mahoro, and others strongly criticized the delay then. And now, Ndikumana has so far avoided the question of an epidemic.

United Nations Children's Fund (UNICEF) wrote in June that there have been some improvements in the humanitarian situation, but it still remained precarious, with 1.7 million people identified as in need. The situation could also be aggravated by natural disasters, including floods and the Ebola threat from neighboring Democratic Republic of Congo, where Ebola has persisted for over a year. Other challenges also remain, such as food insecurity, which impacts 44 percent of the population according to UNICEF, and a recent cholera outbreak in Bujumbura.

This health crisis unfolds within the context of upcoming 2020 elections and the government may be averse to a formal declaration of emergency that could portray it negatively. Political security remains fraught since the controversial 2015 elections.

Many citizens have fled as refugees or became internally displaced — including politicians and journalists — while the government has been criticized for its turn toward authoritarianism, facing off with other governments, international organizations such as the United Nations and African Union and coming under investigation by International Criminal Court for potential serious rights abuses.

The malaria crisis has further destabilized and compounded the situation — exacerbating poverty, food insecurity and economic difficulties, such as recurrent shortages of foods and fuel price rises.

Due to restrictions placed on media and nongovernmental organizations, journalists struggle to work, hindering responses to crises and making it difficult to obtain information.