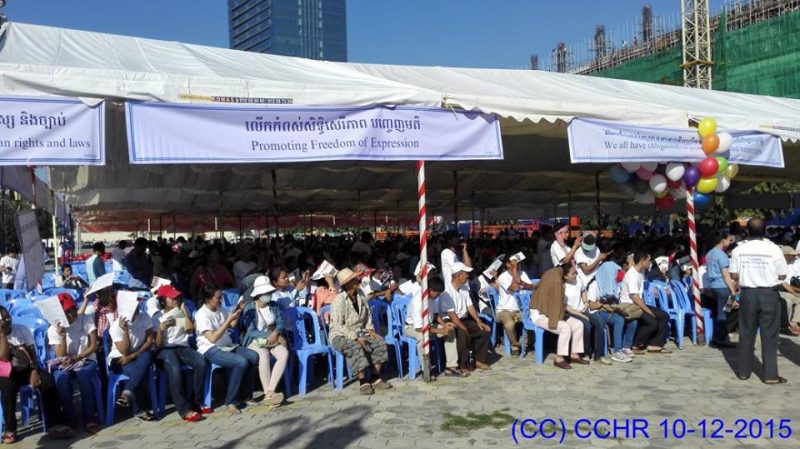 An event celebrating the International Human Rights Day on December 10, 2015 at Freedom Park in Phnom Penh. For many years, the annual event has gathered individuals and groups calling for greater human rights protection in Cambodia. Photo from Facebook page of Cambodian Center for Human Rights.

Responding to the clamor of the business sector, the Cambodian government issued a decree [2] reducing the country’s public holidays from 28 to 22. Authorities said this decision will boost the country’s competitiveness but some groups are worried that this might undermine public commemorations of important historical events.

The Paris Peace Agreements Day commemorates the end of war in Cambodia in 1991 [3] and marks the country’s transition to democracy. It laid the framework for the building of a modern democratic state and reflected the unity of major political parties to pursue peaceful political reforms.

Ek Tha, spokesperson for the Council of Ministers, explained that the decree is a response [4] to the petition of domestic and foreign employers to cut the public holidays.

It is because the government wants the Kingdom to be competitive and attract national and international investments…It’s so they [citizens] can contribute to the building and development of Cambodia in order for it to be more prosperous.

But Pav Sina, president of the Collective Union of Movement of Workers, appealed [5] for reconsideration since the reduced holidays would affect the benefits received by workers

Unionists are holding a discussion with each other to find a way on how to request the government to reconsider with their decision to cut public holidays because workers will lose their benefits.

Cambodia is one of few countries which celebrates Human Rights Day as a public holiday. The decision to remove it from the list of holidays is seen by some as a symbolic reversal of the country’s commitment to implement democratic reforms.

The Cambodian government is accused of silencing dissent by banning [6] and dissolving the main opposition party, the Cambodia National Rescue Party (CNRP). The government also filed [7] tax and licensing charges against some media outlets which human rights groups described as arbitrary and politically-motivated. In response, authorities linked the opposition and some civil society groups with foreign powers which are allegedly ‘conspiring’ to destabilize the government.

While civil society groups acknowledge the goal of rationalizing the number of holidays, they expressed concern [8] that it could negatively affect public understanding of events that laid the foundations of the country’s democracy.

Cambodian Centre for Human Rights [9] executive director Chak Sopheap said [10] that removing some of the holidays will be a “lost opportunity for ending conflicting opinions” on controversial events.

Overall, no matter how the days are set, may the spirit of respect for and protection of human rights, as well as the necessity for national reconciliation and national independence, be on the agenda for all of us to develop the country sustainably and in peace.

Soeung Sen Karona, spokesperson for the human rights group Adhoc [11], said that the decree is another indication [12] of the government’s attack on democracy.

Omitting the Paris Peace Agreement and Human Rights days from the public-holiday list reflects that the government is unwilling to promote democracy any longer.

Some civil society groups suggested that some holidays can be merged instead of outrightly removing them. Government officials assured them that these will still be commemorated and the public are still enjoined to organize activities in celebration of these historical events.