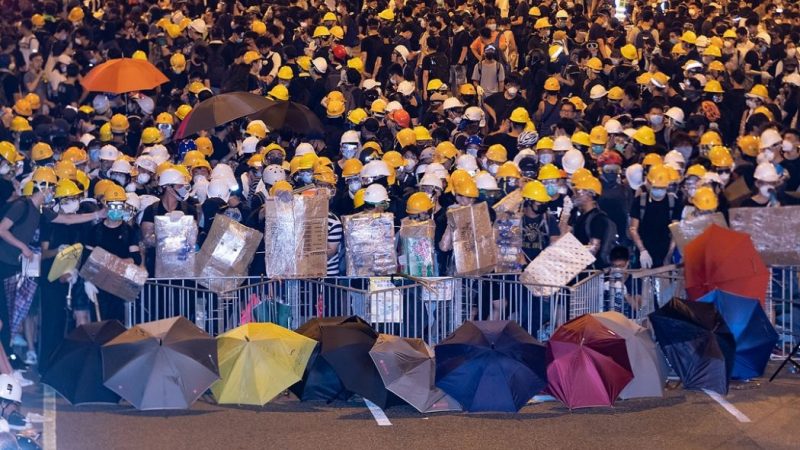 This post was originally written by Kris Cheng and published on Hong Kong Free Press on 9 of August 2019. It is republished on Global Voices under a content partnership agreement.

The tools, equipment, clothing and communication methods used by Hong Kong’s anti-extradition law protesters have captured headlines around the world.

Protesters have often hit the streets in “full gear,” donning black clothes, goggles, gas masks and helmets, among other items. They are able to form makeshift barricades within minutes, pass on messages within seconds, and have come up with new ways to put out tear gas grenades.

Ip Kwok-him, a member of the Executive Council and a National People’s Congress delegate, said on August 8 that he did not believe protesters could acquire their equipment, or form their tactics easily by themselves, insisting that “foreign forces” must be involved. He said:

I have never seen such organised [protests].This is not something common young people can do.

But is the gear used by protesters especially expensive or difficult to obtain?

Of all tools, the most important one is likely to be the protesters’ mobile phones. It helps them to gain real-time information from apps like Facebook, Telegram messenger, and the Reddit-like forum LIHKG.

There are hundreds of pages, channels and forum threads that inform protesters about the situation at sites, updated by the minute, by other protesters or residents who live nearby. There is also a specialised scout channel to report the latest police movements.

However, much of the last-minute, on-the-fly decision making is often made by protesters present on the ground, owing to the sheer size of some of the Telegram groups. 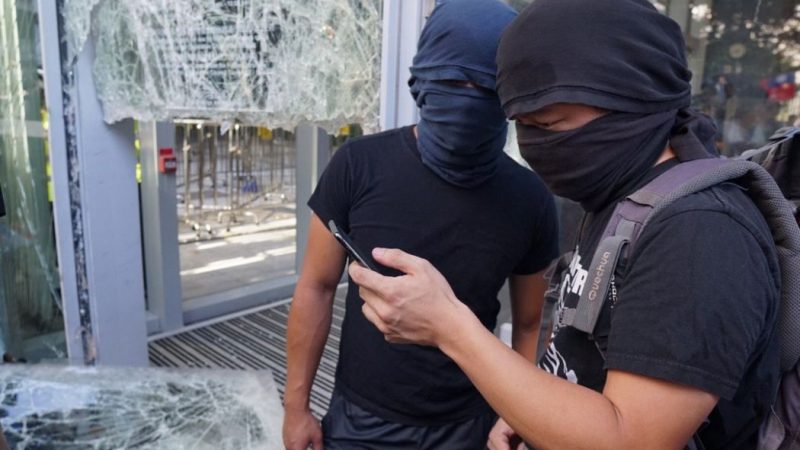 The all-black look is considered better for protesters as it helps to hide their identities. Protesters have been widely sharing information online on how to buy simple black clothing items for under HK$100 or approximately US$14 dollars.

Local residents who support the protests also donate clothes of other colours for protesters to change into, when they leave the protest sites.

On Saturday night, some protesters changed their clothes to shirts made available by others at Yau Ma Tei MTR Station to avoid identification. They also left using single-ride tickets to avoid being tracked through their Octopus card.

Face masks and goggles were often used by protesters to protect themselves from pepper spray, before the recent protests rocked the city.

Tear gas canisters were used on one evening during the 2014 pro-democracy Umbrella Movement protests, but was not used again until the June 12 demonstration this year. Protesters were mostly still using masks such as the N95 model. Since then, protesters have sought better protection, such as respirators from the US brand 3M.

There have also been full manuals posted online comparing the effectiveness of different respirators and filters, with some activists now switching to full-face gas masks. 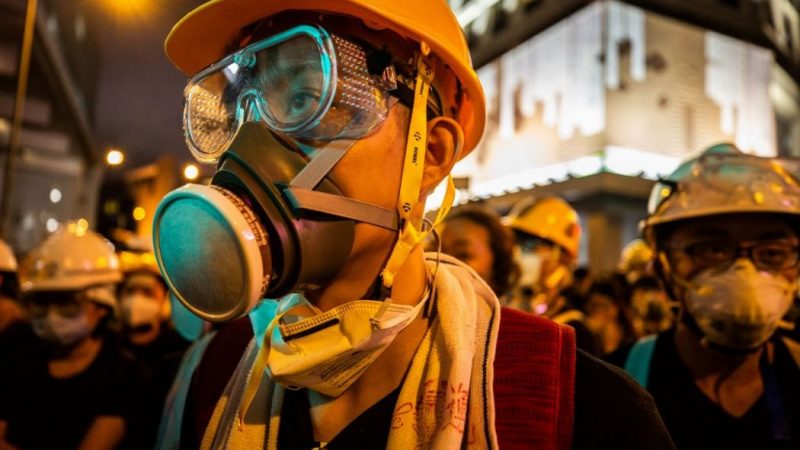 Umbrellas were mostly used in 2014 to shield protesters from pepper spray. But their use has evolved with the appearance of more projectiles, including rubber bullets and sponge grenades.

Now, umbrellas are used to cover protesters’ identities, when removing railings or setting fire. Protesters shout “it’s raining!” as a sign to tell others to come and cover people with umbrellas.

They have also been used to obscure CCTV cameras, as well as to block train doors as protesters try to bring MTR (the public transport provider) services to a halt. 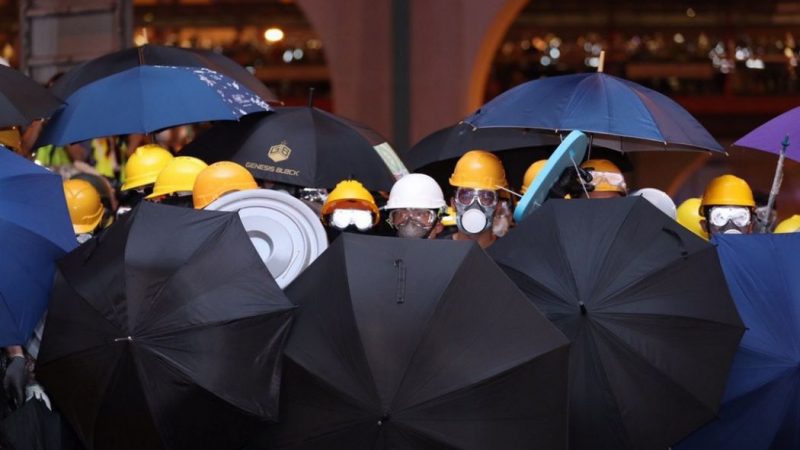 Protesters usually form a triangular block barricade by tying the railings together with cable ties. They are then shifted to the frontlines. Cable ties were also once used to subdue a suspect accused of attacking protesters in Yau Ma Tei. 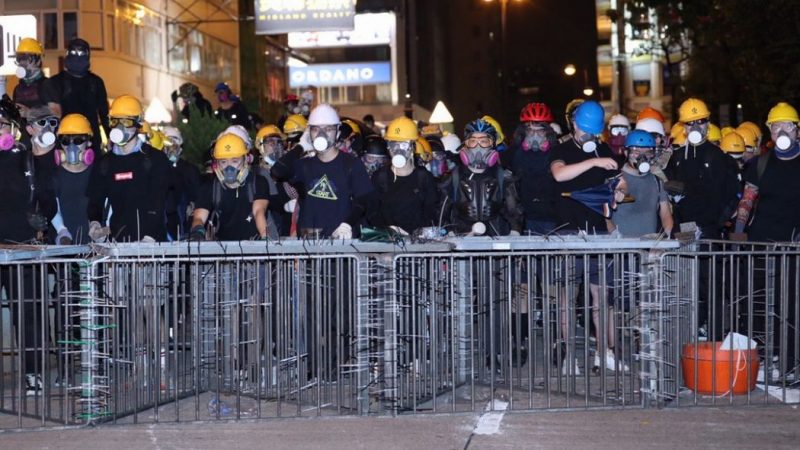 A symbol of the protests are the hardhats used by protesters – usually simple yellow or white construction helmets.

Since the Hong Kong police started to use more dangerous crowd control tools such as rubber bullets and sponge grenades, protesters have tried to upgrade their helmets to tougher ones, such as those from cycling or mountaineering brands. 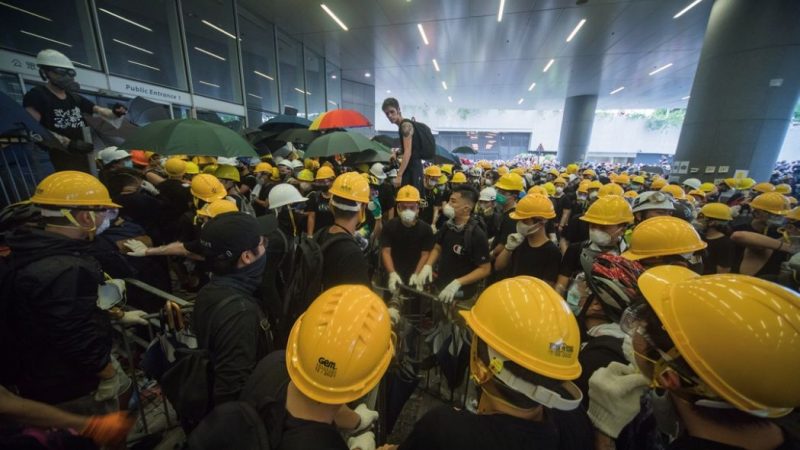 Protesters developed a temporary measure to cover their arms with plastic wrap to, at first, defend against pepper spray, and later to guard against tear gas. Some have used other means to protect their skin such as wearing detachable sleeves used for hiking.

Plastic wrap has also been utilised to creating barricades to slow down police advances. In recent weeks, cling film has been unrolled between lamp posts across roads. 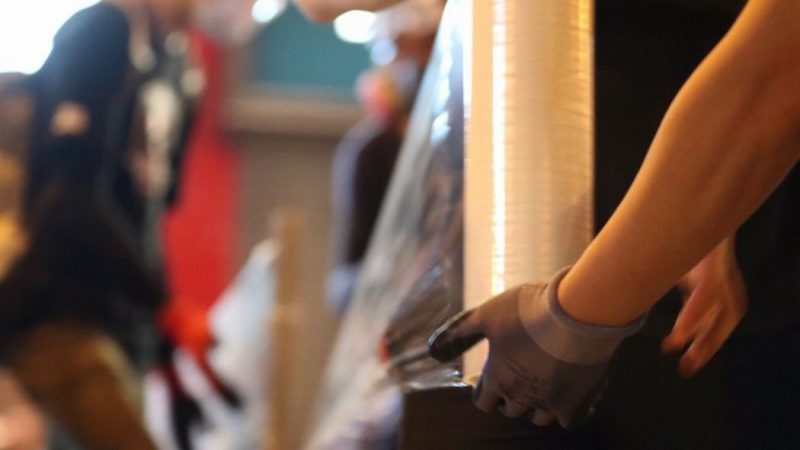 Many activists wear gloves to deal with sharp objects and heavy items such as when they move barricades.

Recently, gloves have been necessary for those seeking to throw tear gas canisters back at the police lines. Protesters are also able to guard against depositing fingerprints by covering their hands. 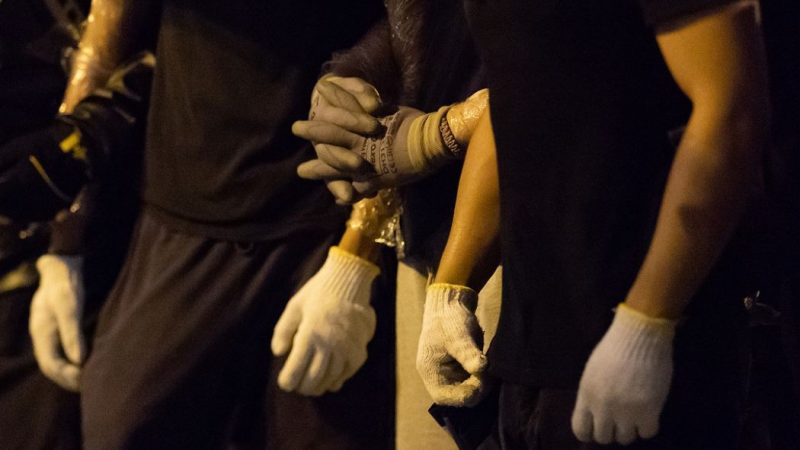 Protesters have used cardboard, wood or parts of suitcases to act as shields. Some have made makeshift shields using ironing boards or swimming floats.

A couple of activists have wielded “Captain America” style shields, though it is unlikely to provide the protective power seen in the movies. A minority of protesters have also used full, reinforced arm protection, knee and elbow pads. Gear designed for motocross, ice hockey or American football has also been spotted. 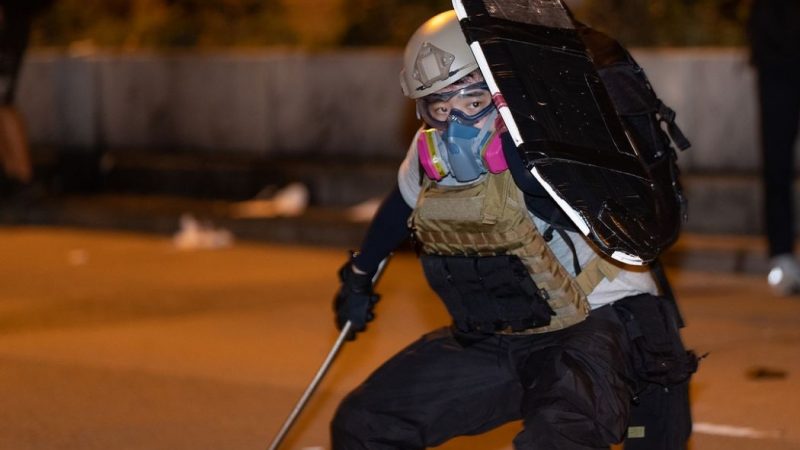 An ironing board shied. Photo: May James/HKFP.

Protesters have also been coming up with new and efficient ways to put out tear gas canisters. In June, the method was simply to use water to douse them.

In July, protesters started to form voluntary “firefighting teams” to cover tear gas canisters with traffic cones, and then pour water in. Recently, the latest method is to use a metal bowl to cover the canisters and put them out by cutting off the air supply. Wok lids have been spotted on the frontlines for this very purpose. 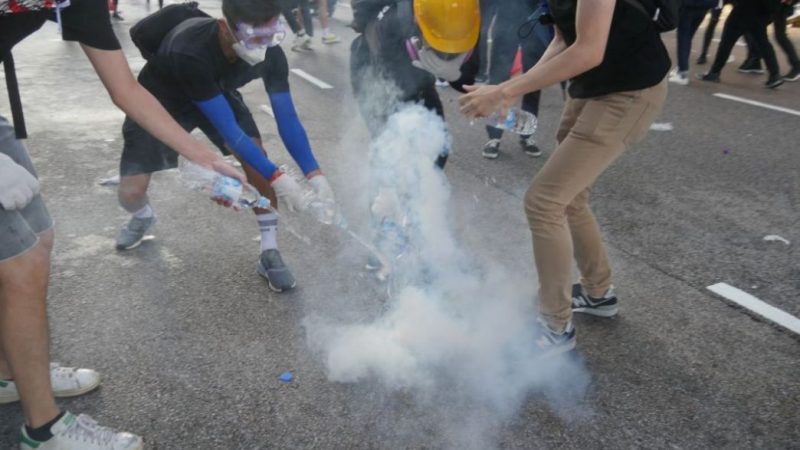 Protesters have often used laser pointers to block, annoy and distract police officers on the frontlines.

Police arrested a student leader after he purchased ten laser pointers this week. He was held on suspicion of possessing offensive weapons before he was unconditionally released. Police claim that “laser guns” can damage officers’ eyes and cameras.

But police also use laser pointers aimed at protesters, as well as strobe lights. Some officers have taken to wearing tape on their helmets in an apparent effort to guard against lasers.

On more than one occasion, sling shots have been spotted on the frontlines of protests, sometimes used to smash the windows of police stations. 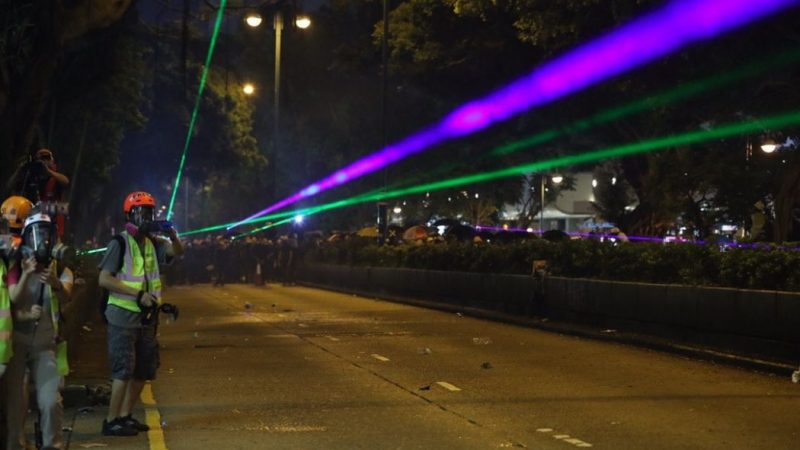 Protesters have hand signals for items to be passed to the front quickly. They form human chains to maximise efficiency.

Some small groups of protesters have also started to use walkie-talkies to communicate, as the phone network does not work well in crowded situations.

Meanwhile, some activists have taken inspiration from the message banners waved at them by police, and have created banners of their own bearing instructions such as: “forward”, “stop” and other messages.

Protests in Hong Kong reflect certain characteristics of the city in that they are compact, well connected and make use of a flourishing free internet. Protesters themselves are often highly educated, with university students and professionals across different sectors taking part.

The campaign to crowdfund HK$5 million for a G20 meeting global ad campaign within one day was carried out in public through LIHKG forum posts. Its successful execution demonstrates the capacity of the movement to act on its own. 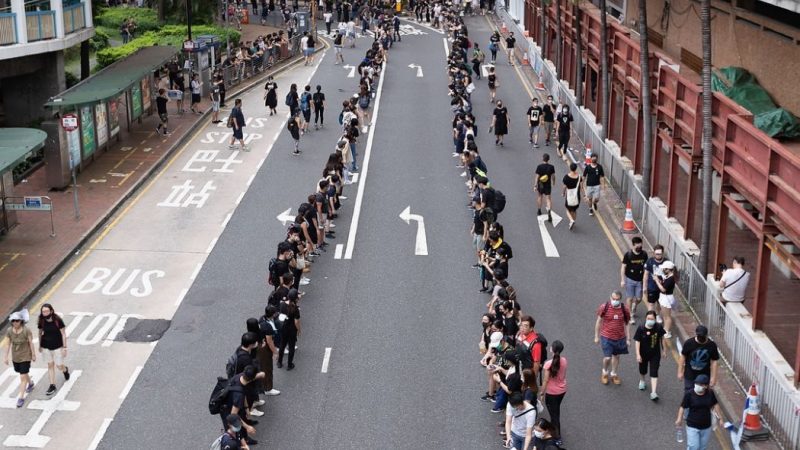 Amid rumours of foreign interference, the Hong Kong government may have underestimated how successful its own education system is. It has taught students and graduates to seek useful information and take direct action.