Remembering the '88 uprising’ for democracy in Myanmar 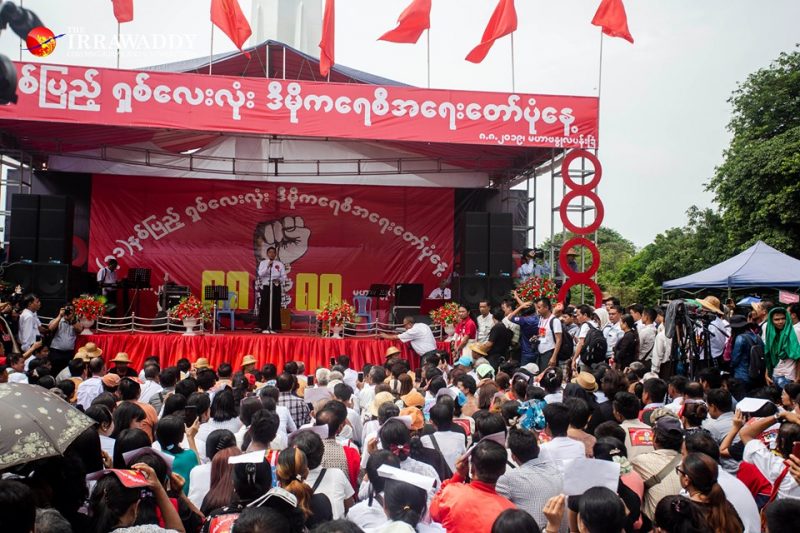 A commemoration of the 31st anniversary of the ’88 pro-democracy popular uprising in downtown Yangon was organized on 8 August 2019 and joined by former student leaders who were involved in the movement, Yangon regional government officials and members of the public to honor those who lost their lives during the crackdown on the protests. Photo and caption by Aung Kyaw Htet / The Irrawaddy

This article by Wei Yan Aung is from The Irrawaddy, an independent news website in Myanmar, and is republished on Global Voices as part of a content-sharing agreement. This provides a brief historical overview of Myanmar's transition from junta rule and the continuing struggle for democracy.

On 8 August 1988, citizens in Myanmar took to the streets to topple dictator Ne Win’s oppressive socialist regime which had ruled the country with an iron fist since 1962.

Despite the collapse of the regime, the movement—known as “the ’88 uprising”—led to a bloody coup by the military.

General Ne Win's regime demonetized the 25, 35, and 75 kyat notes without warning or compensation in 1987 and perpetrated a brutal clampdown on pro-democracy student movements in March and June of 1988 — events which were the final straw for the people of Myanmar.

President U Sein Lwin, a Ne Win henchman who had played a continuous part in suppressing peaceful demonstrations since the military regime staged a coup in 1962, declared a curfew and ordered a violent crackdown on protesters. Government newspapers said over 300 died but independent sources estimated that the actual figure was ten times that.

The military, at the instruction of Ne Win, seized power again through a coup before holding general elections in 1990, but the military did not transfer power to the election winner, the National League for Democracy (NLD). Myanmar again fell under military rule for the next 20 years, during which it designed a constitution in its own favor.

General elections were held again in 2010, but the military retained its full grip through its proxy Union Solidarity and Development Party. The NLD, which was born out of the ‘88 pro-democracy uprising, won the general elections in 2015 and became the ruling party. However, the NLD still finds it difficult to remove the military from politics.