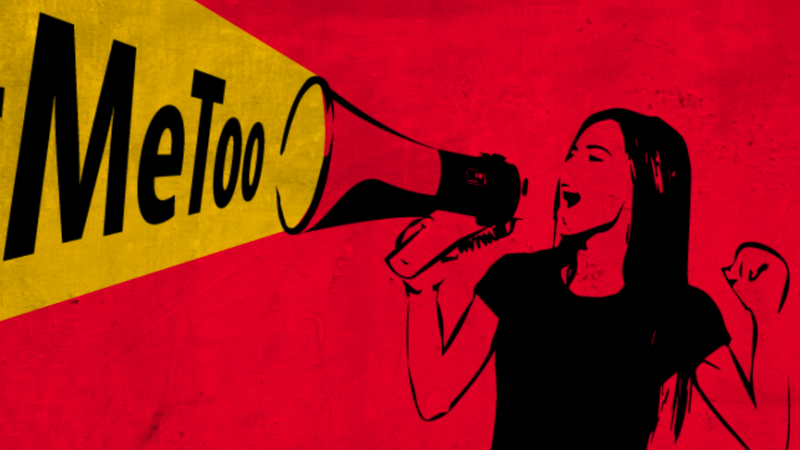 A year after actress Meesha Shafi took to Twitter [1] to accuse Ali Zafar [2] of sexual misconduct, the Pakistani entertainment industry is once again rocked by controversy. This time, actor and musician Mohsin Abbas Haider [3] stands accused of domestic violence and is awaiting trial.  [4]In the midst of the global #MeToo [5] movement, when calls to believe women's stories are taking center stage, netizens have been quick to rally around Haider's accuser.

On July 20, 2019, Haider's wife, Fatima Sohail, [6] accused him of beating her in a post on her Facebook page. [7] The post included pictures of her face with prominent injuries.

On 26th Nov 2018, I caught my husband cheating. When I confronted him, instead of being embarrassed he started Beating me. I was pregnant at that time!
He pulled me from hair, dragged me on floor, kicked me several times, punched me on face & threw me on the wall.

This was later followed by an official first information report (FIR),  [8]which included claims that Haider had been “beating, abusing, and assaulting [9]” Sohail since the beginning of their marriage.  While he is on interim bail [9] until August 16, many celebrities have been supporting his wife and also coming out as witnesses to the domestic abuse she faced. Actor and TV Host, Dua Malik, [10] claimed to be an eye witness to Haider [3]‘s abusive behavior for three years. She posted a statement through a story posted on her official Instagram account: [11] 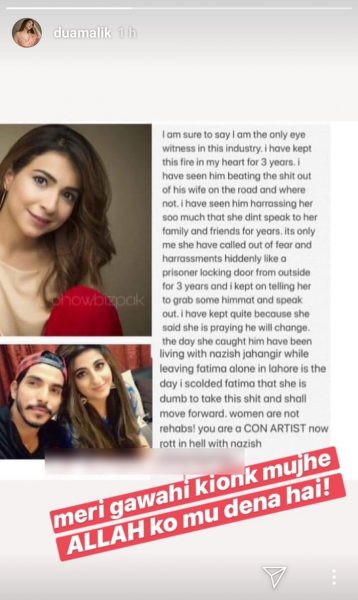 Actor Mirza Gohar Rasheed [12] also shared his testimony as a second-hand witness through his tweets;

The injustice that took place with #FatimaSohail [13], I was a second hand witness to it in 2018 when my friend took #Fatima [14] to the hospital after she had been beaten up by #MohsinAbbasHaider [15] Through her I got to know the whole Story. Fatima is like a sister to me (1/3)

SHE, wanted to save her marriage and ensure the health of her baby so we respected that and kept quite but now since she is out with the truth her self (more power to you #fatima [17]) (2/3) #justiceforfatima [18]

I wanted to say that men like these are a threat to the society I don’t see him just as a spineless, pathetic sick human being , I see him as a danger. She needs justice and he needs HELP. #justiceforfatima [18] (3/3)

Haider [3] has denied all allegations through a press conference [21] where he claimed that Sohail [6] was retaliating against him because he wanted to remarry which, according to him, was his legal and religious right. He claimed that the pictures attached in her post were from her falling down the stairs in 2018:

If she was getting beaten up by me for four years, why are there no medical reports?

Why do we always play the woman card? Not every wailing woman can be right; why can't men be wronged? Go see the social experiments white people do, when a man and woman fight on the street, and the woman slaps the guy, no one bats an eye, people laugh and make videos. But if a man shoves a woman, people stop and start fighting with him.

Many people were infuriated by his statements, taking to social media to voice their anger:

You get sexually harassed and people will not take your word for it and will ask for proof. You get beaten black and blue and have photographic evidence and people will say there is another side to the story. You can never win as a woman. #MohsinAbbasHaider [15]

I urge the people especially those in authority to not overlook the abuse #FatimaSohail [13] went through. If this brave woman who shared her story with millions does not get justice, we as a community would have disgraced ourselves and normalised domestic violence. #MohsinAbbasHaider [15]

Haider [3] was fired from his post as a host from a prominent TV channel a day after the FIR was filed. Some people stood in his support, asking to keep personal and professional lives separate:

I believe that your Personal life should be kept away from your Professional Life. Duniya News should not fire #MohsinAbbasHaider [15] from MazaqRaat because only god knows the truth.

While the matter is in court, Haider [3] continues to prove his innocence and undermine his wife's side of the story. On July 26, he posted a video [25] of controversial entertainer Waqar Zaka [26], in which he claimed to receive calls from individuals from a prominent production house claiming that Sohail [6] had an affair with someone “whom he would not name” while being married to Haider [3]. Zaka [26] not only failed to present any proof of his claim but also said that he was no judge of who is right or wrong.

Pakistan is a country where domestic violence is a serious issue; however, it is not something openly talked about. After the #MeToo movement began, Pakistani women have started to speak up about this taboo topic.