Why are Turkmen elites being so tight-lipped about the whereabouts of President Berdymuhammedov? 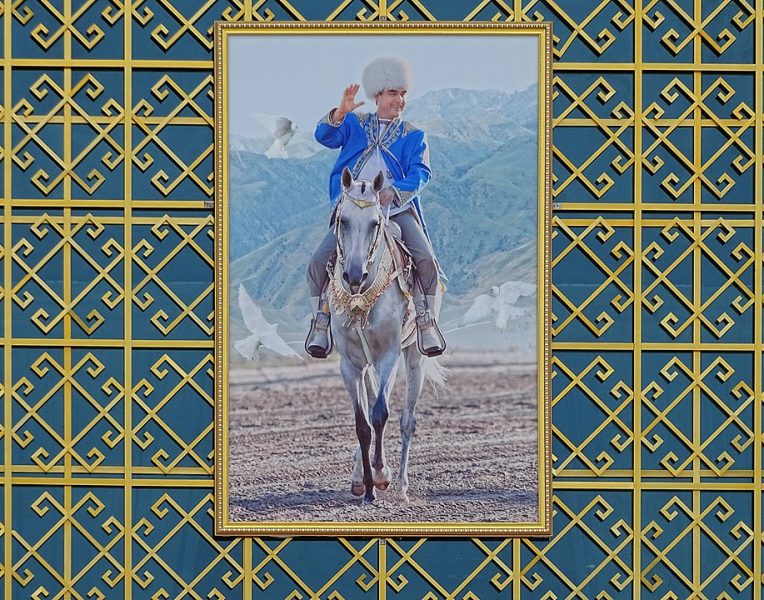 In the past few weeks, the Turkmen president, Gurbanguly Berdymuhammedov, has been suspiciously absent from media and the political life of the country. He has been reported by turns as being at a German hospital looking after his ill mother, dead as result of kidney failure, then alive talking on the phone with the Uzbek president.

Whatever Berdymuhammedov’s condition, the reality is that, contrary to his usual style, he has not made any public appearances.

This situation has brought Turkmenistan, usually absent from major international news reports, into the limelight, with media and analysts speculating about the fate of the president. A Telegram message spread through Twitter on July 21 reported the president had died from kidney failure. State sources denied the rumours and announced on July 25 that Berdymuhammedov had spoken on the phone with the Uzbek president. He then disappeared again and hasn’t been heard from since.

Video clips of the president riding in a car and of him discussing the country's economic performance were released on August 3 and 5, but the footage is considered unreliable by some analysts.

Playing at guessing where the president might be has been a pastime for media and analysts this past July. Few dare to make predictions, but most analysts sense that something is going on. The situation has been made even more intriguing by the limited (read: virtual absence) of information offered by national independent media. Turkmenistan lags behind in terms of internet penetration and it is rare to come across any official information from sources other than state media.

Berdymuhammedov has ruled Turkmenistan since 2007, when he was selected to replace the country's first president, Saparmurat Niyazov. Niyazov had died on December 21, 2006 from a heart attack, leaving a power vacuum that was filled after a highly disputed election. Of the alleged 95% eligible voters that cast their ballot, 89.23% supported Berdymuhammedov (at least in theory). Re-elected in 2012, in 2016 he abolished term limits for presidential candidates, essentially opening up for himself the possibility of remaining president for life.

Why can Turkmen elites not simply tell the world where the country's president is? There are several explanations which are related to the four most plausible scenarios:

Scenario 1: Berdymuhammedov is alive and kicking. He could be on holiday but, given his long-standing love of media exposure, it would be unusual for the public not to have been treated to at least a picture of him driving a cruise ship in the Pacific or fighting a bull with his bare hands in Spain. The only possibility is that he is in some secret location, making strategic plans about the future of the country. Basically, this means he is doing some spring cleaning among Turkmen elites, sacking those who have shown any degree of hostility or lack of cooperation on certain delicate matters. But such a task could be carried out in a day or two. Why disappear for so long?

Scenario 2: Illness. According to official sources, Berdymuhammedov’s mother is ill. How long, however, can a president reasonably sit in a room looking after his mother leaving the country's most urgent affairs unattended? Or is there an associate whom he trusts so deeply as to leave him in interim command of the ship? The plane reportedly seen in Germany may have been used for the president and his mother, but not in the configuration that was declared. Rather than the president taking his mother, it may have been the mother taking the president to the hospital.

But, once at the hospital, what happened?

Scenario 3: It is not really nice to write about someone's death before his time has come, but one cannot ignore the fact that Turkmenistan may have no president at the moment. Why has nothing yet leaked out? Inasmuch as “stability” is one of the favourite words of post-Soviet elites, this hinges on at least two conditions.

Firstly, the incapacity of these elites to share hardship publicly. Appearances are all-important and, with public accountability counting for little or nothing in Turkmenistan, one way to deal with the president's death would be to spare the public the trauma of instability by announcing a new president together with the passing of the previous one.

Secondly, fear of being stabbed in the back is widespread among Turkmenistan’s citizens and even more so amongst its elites. If you were a member of the elite trying to derive the maximum benefit from a post-Berdymuhammedov reallocation of roles and redistribution of power, what benefit could you expect from being the whistleblower?

Scenario 4: The president has been dismissed, Boris Yeltsin-style, and the elites are re-organizing. Power relations are being redefined and it is in the interest of many for this to happen with little or no external influence. The reasoning of Scenario 3 can be applied here as well: Given the influence that Berdimuhammedow has wielded in the past, and his capacity to manage the elites, this scenario is not very likely, unless the president has suddenly lost his charisma or power, which is often what happens when serious illness strikes.

“Predictions are difficult, especially about the future,” the Danish physicist Niels Bohr warned us. But there is no prediction to be hazarded here. It is rather a matter of guessing what the president is doing. If he is not alive, reorganization within the elites will already have started and we would know something about the outcome of the process—or may even already know by the time this story is published.

It is likely that we do not know the current state of Turkmen politics because the elites themselves do not know it, and cannot make a decision—at least until the president’s health improves or definitely worsens. Until then, we are condemned to wait until the next leak of official information from the authorities.