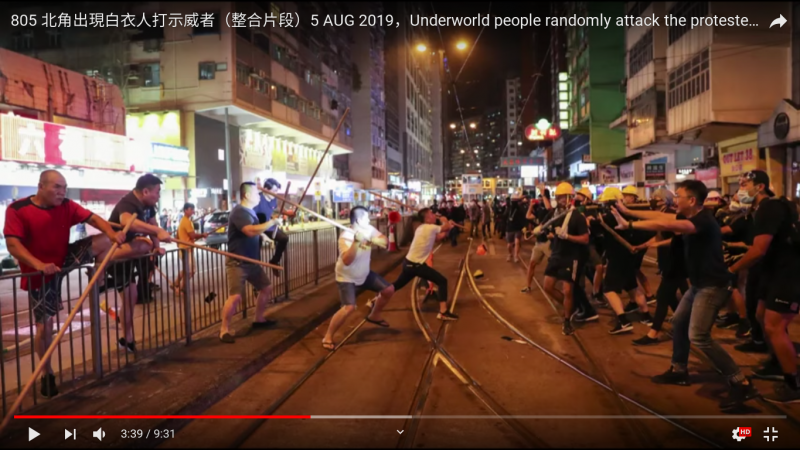 On August 5, about two dozen Fujianese picked a fight with anti-extradition protesters in North Point. Screen capture from Youtube video.

A large number of residents of Fujian, a province on the southeast coast of China, have announced they will be travelling to Hong Kong to beat up anti-extradition protesters during protests in the next few days.

Messages about the recruitment of cross-border attackers have spread all over the Chinese social media platforms WeChat and Weibo in the past week. Comments and reactions suggest such an aggressive move is being praised as ‘heroic’ by large numbers of mainland Chinese citizens.

In Hong Kong, local residents are fearful, as they have not seen many measures taken by Hong Kong authorities to stop the foretold criminal acts, except notices posted on residential buildings instructing residents near protest areas not to go out and to shut their apartment windows on August 11. 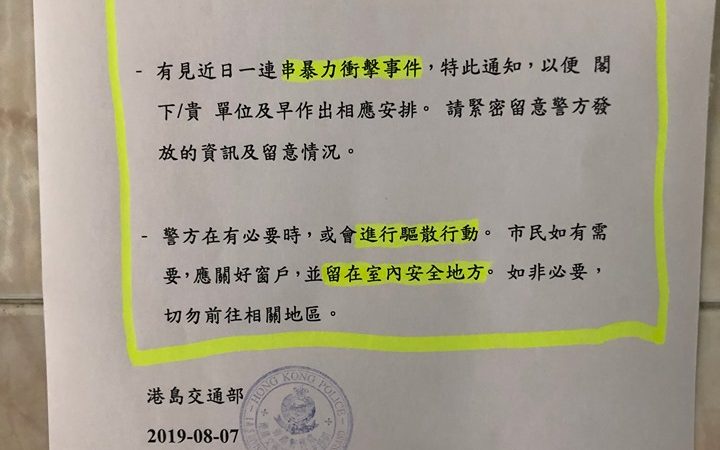 Notice issued by Police Traffic Department reminding residents to stay away from protests and shut the windows to prevent tear gas from entering their apartment. Image taken by Oiwan Lam.

Mob attacks in Tsuen Wan and North Point on August 5

After the mob attacks on anti-extradition protesters in Yuen Long on July 21, various media outlets reported that the China’s Liaison Office in Hong Kong had encouraged pro-Beijing forces to block district-level protests in a gathering with village heads.

Despite public outrage, similar mob attacks have been observed in at least two other districts, including Tsuen Wan in the western part of Kowloon, and North Point in the eastern part of Hong Kong Island during the general strike, and in various district protests on August 5.

In Tsuen Wan, a mob wearing blue T-shirts was spotted on the streets at around 8pm, carrying sticks and other weapons. Upon receiving the news, a large group of anti-extradition protesters rushed to the spot and chased them away. But at around 11pm, when the majority of the protesters had left the scene, a group armed with weapons appeared on the streets to pick a fight and a 18-year-old man wearing a black T-shirt was chopped on his head, arm and leg by two white-shirted thugs on the sidewalk. Passers-by came to the rescue and the incident triggered yet another street fight between protesters and thugs. Three people suspected of starting the attack were beaten, tied up by protesters and left on the street for an ambulance and police to pick up.

In North Point, a group of thugs was spotted at a street corner waiting for protesters to pass by and pick a fight. But they were outnumbered by protesters and defeated quickly. @jesuispopple posted this video of the confrontation on Twitter:

Full video of what happened just now in North Point. Not quite sure why the white shirts went after a group of full gear'd, much younger, much agile (some wshirt can't even climb the rail) protesters who aren't afraid to fight back. #antielab #hongkongprotest pic.twitter.com/0OCoU4b7bO

In both incidents, police officers were absent from the streets, and in the case of the North Point, police officers only arrived at the conflict scene four hours after the crowd had already dispersed. The police authorities later stated that the police station in North Point had been blocked by protesters, though in Hong Kong every district has a police station and it takes less than 15 minutes for another district to send backup forces.

Residents from North Point and Tsuen Wan quickly identified the attacking thugs as Fujianese, as they spoke the Hokkien or Minnan dialect.

Hong Kong is a immigrant society and the majority of people who move to settle in the territory come from mainland China. About 1.68 million of them are Fujianese immigrants and their descendants. Both Tsuen Wan and North Point have become traditional residential districts for people who identify as Fujianese and migrated to Hong Kong in 1980s and 1990s. This community maintains close links with their relatives back in the province of Fujian in mainland China. Such communities also socialize in Hong Kong through village or town-level kinship associations called Tongxianghui, through which they connect with compatriots from the same hometown.

After the handover of Hong Kong to China in 1997, Beijing started considering and using Tongxianhui from Fujian and other provinces in China as a key mechanism for exercising political influence in Hong Kong, particularly during elections. Among hundreds of Tongxianhui in Hong Kong, the ones from Fujian province are the most loyal to Beijing. However, second- and third-generation Fujianese in Hong Kong have distanced themselves from Beijing’s political control, and some have joined the anti-extradition protests. 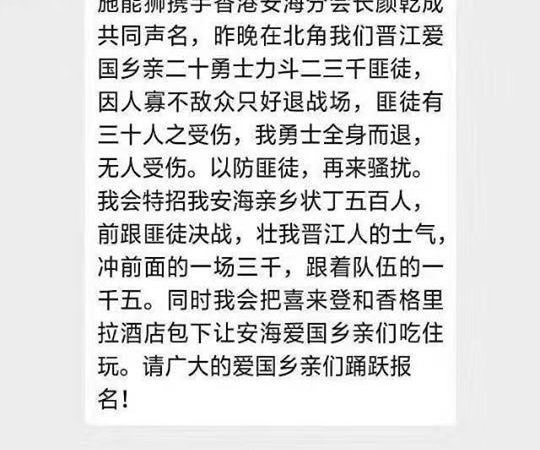 Screen capture of a Fujianese group on WeChat. Source protected.

Urgent notice: The head of Hong Kong Jinjiang Tongxianghui Shi Nengshi and the head of Hong Kong Anhai association Yan Kangcheng made a joint statement: last night about 20 patriotic Jinjiang fellows fought with 2 to 3,000 thugs. They were outnumbered and forced to retreat. They have not been injured and managed to hurt 30 thugs. To prevent further harassments from thugs, I would invite 500 young fighters from Anhai to support Jinjiang fellows. We would have 3,000 people in the frontline and 1,500 people to back them up. I will reserve rooms in Sheraton and Shangrila hotels for our patriotic Anhai fellows to enjoy. Please sign up for the event. 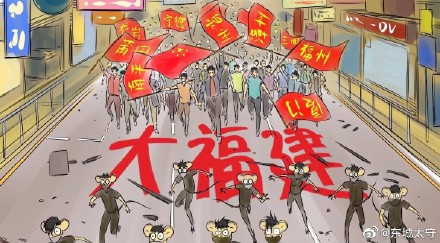 Chats about the mobilization of Fujianese “fighters” to Hong Kong also circulated on Weibo. Large numbers of netizens do in fact cheer on this “patriotic act”. Here is a typical post on Weibo:

#Fujianese beat up young losers# Fujianese have a very difficult life. They have to struggle with Taiwan [Fujian is located across the strait of Taiwan main island, and people speak the same Min-nan Chinese language]. They have to fight typhoons [Fujian is located in a typhoon-prone area]. They have to defend the Diaoyu Islands [also known as Senkaku Islands, a disputed territory between Japan and China]. They have to compete with Guangdong province, and now they have to educate Hong Kong young losers. Previously, Yuen Long villagers courageously formed a white-shirt army, now Fujianese are forming a blue-shirt army to fight against the thugs. If we compare Hong Kong with a human body, the young losers are the virus that invades the human body, the courageous people are the white and red cells. We need more white cells to defeat the virus, and to swallow them up. We have to pay tribute to the Fujianese people, don’t be soft handed.

Another commenter said on Weibo:

The nation has fed you. Protect national security. If needed, not only Fujianese, but people from the whole country can buy tickets to Hong Kong to teach the pro-Hong Kong independence thugs a lesson.

As a result of censorship, the majority of mainland Chinese people know very little about the anti-extradition protests. They believe that the current protest is a pro-Hong Kong independence color revolution sponsored by foreign forces.

Both local media outlets and the police authorities were notified of the Fujianese plan to pick fight with protesters. The only authority that can stop the massive street fight, however, is China's Liaison Office in Hong Kong.