Kenyan MP and her baby ordered out of parliament: ‘What was I supposed to do? Miss my duties?’ 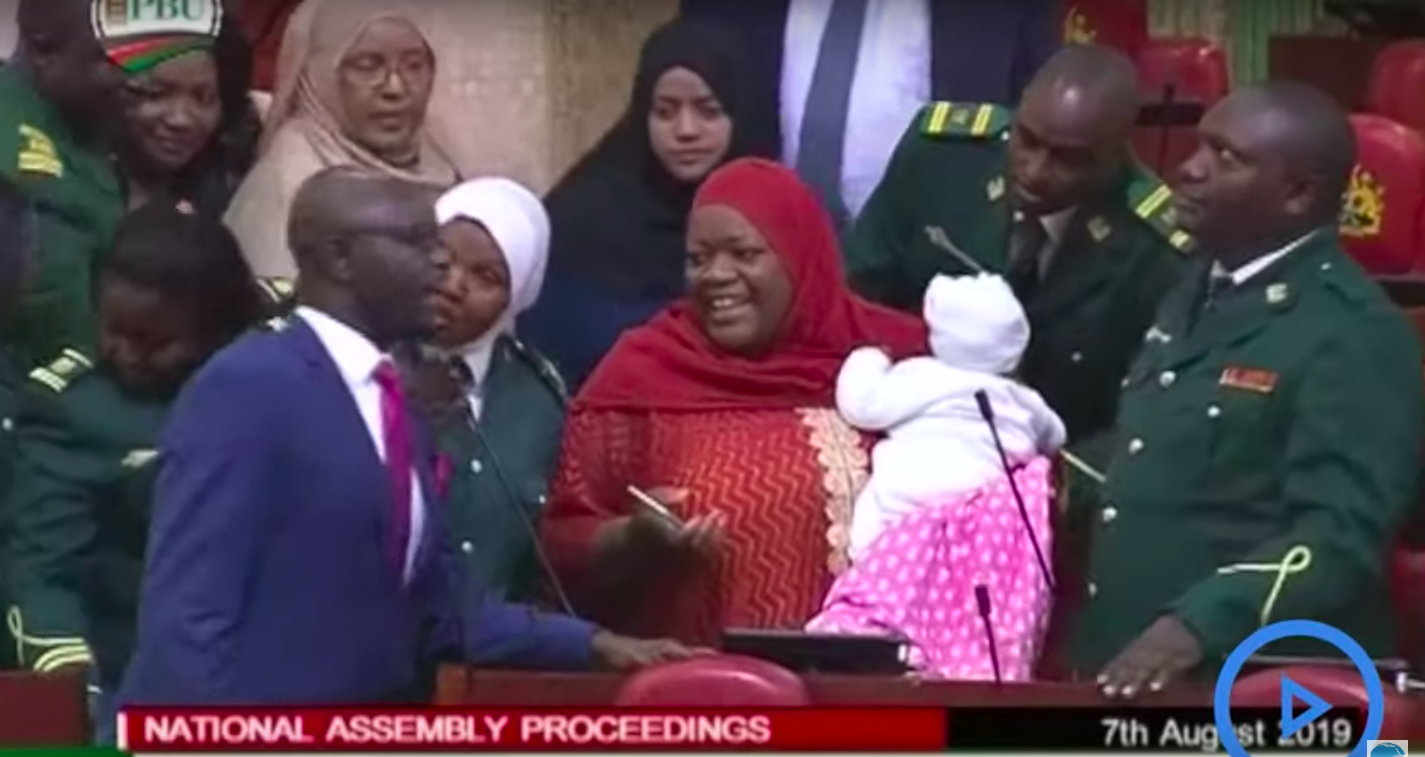 On August 7, Kenyan Member of Parliament Zulekha Hassan and her 5-month-old baby were kicked out of parliament. Hassan had entered the debating chamber with her baby in her arms during morning parliamentary proceedings, technically breaking house rules that prevent a “stranger” from entering the chambers, including babies.

A female MP in Kenya has been kicked out of parliament for carrying her baby into the chamber. She said it was an emergency and blamed her predicament on the lack of a parliamentary creche.

The incident has ignited renewed debate on breastfeeding rights for working mothers in Kenya.

Parliament was debating the Kenya-Somalia Maritime Border Dispute Resolution when MP Hassan walked in with her baby and parliamentary proceedings came to a halt. Several MPs began to shout and shove each other over the sight of MP Hassan with her baby.

Hassan explained that she brought her baby to parliament because of a family emergency, as quoted in the Standard:

This is my third baby in Parliament; I’ve never done this. I’ve tried really hard not to come with a baby but today I had an emergency so what was I supposed to do; miss parliament and my duties just because I have a baby? That’s why I came with her.

In an attempt to restore order, Deputy Speaker Christopher Omulele ordered MP Hassan to withdraw from the chambers together with her baby:

As much as [Hassan] might want to take care of her child, this is not the place for it. And I therefore direct she immediately withdraws and she may return to the chambers after she withdraws the child.

Immediately after Hassan was ordered to leave, some MPs stood up to support her and urged her to stay. This also caused a stir. MP Samuel Onunga Atandi was ordered to leave the chambers after he attempted to stop MP Hassan from being removed. The female MPs threatened to walk out with MP Hassan.

When asked if she was trying to make a statement, MP Hassan said no. The mother of three explained that this was the first time she brought her baby to work and said parliament is not a “family-friendly atmosphere.”

The presiding deputy speaker explained that parliament's facilities for lactating lawmakers make it unnecessary to enter the debating chamber with their babies. But MP Hassan said parliament had no nursery or crèche.

The National Gender and Equality Commission (NGEC) in Kenya criticized the removal of MP Hassan and her baby. The commission called out the removal as discrimination against a breastfeeding mother.

Furthermore, it wants the Parliamentary Service Commission (PSC) to quickly establish a crèche to accommodate nursing MPs and their children.

Lawmakers MP Sophia Abdi Noor, MP Sarah Korere and MP Rachel Nyamai also criticized the incident. Like the NGEC chairperson, the lawmakers called out the PSC for not yet providing stations for breastfeeding mothers and children.

In 2013, the PSC was mandated to set aside a room for breastfeeding mothers.

MP Hassan is not the first Kenyan lawmaker to enter the parliament with a baby. In 2013, MP Sarah Korere breastfed her baby during the National Assembly. Wanting to exclusively breastfeed her baby for six months, she took breaks during parliamentary proceedings to go feed her baby.

Is breastfeeding a crime?

Under Kenya’s Breastfeeding Mothers Bill, 2017, any woman who has a baby may breastfeed or express breast milk at a lactation place in the workplace. Unfortunately, since 2016 when this bill was first approved, the president still hasn’t signed it.

On May 15, 2018, Kenyan mothers marched in protest to parliament to petition the government to sign the Breastfeeding Mothers Bill. The protest was instigated by a discriminatory incident against a breastfeeding mother at a restaurant.

In 2017, the Kenyan government unveiled a human resources policy that required public offices to provide lactation stations. Public offices were given three years to set up appropriate lactation and daycare stations.

Netizens were quick to comment about the incident and reproach MP Hassan’s removal from the parliament:

Women must work..Women must breastfeed!! This kind of discrimination cannot be tolerated!!! Lactation Rooms should be put in place!! https://t.co/kfXvgXBeNn Kwale woman rep Zuleika Hassan ejected for bringing baby to Parliament

This dismissal was unprofessional and it should have come to the attention of the house that there is need to focus on why the breastfeeding chamber has not been set aside https://t.co/kG8AMSVGc2 #equality4all

#Kenya‘s men are not putting their best foots forward this week…https://t.co/ejjJztWz0G

Neighboring Tanzania allows breastfeeding mothers to leave the office for a maximum of two hours during working hours to breastfeed. This right extends consecutively for a period of six months after maternity leave, in accordance with Employment and Labour Relations Regulations, 2017.

Still, lawmakers are not allowed to feed their babies in parliament. On June 28, 2017, parliament did set aside a lactation station for the female lawmakers, but Tanzania still lacks regulations that require workplaces to provide lactating and daycare facilities.

Australia, Canada, New Zealand, Iceland, and the US allow women to enter parliament with their babies and breastfeed at work. British MPs are still not allowed to breastfeed or bring their young children into parliament.

In New Zealand the PM brings baby to parliament and is admired, in Kenya an MP gets kicked out. Shame on you Kenya! https://t.co/4MT8WvzXyY

Ironically, Kenya is lauded as a breastfeeding success story. It's on track to increase exclusive breastfeeding to 50 percent by 2025 — a World Health Assembly target. However, Kenya still needs to improve the implementation of all related laws and mandates.