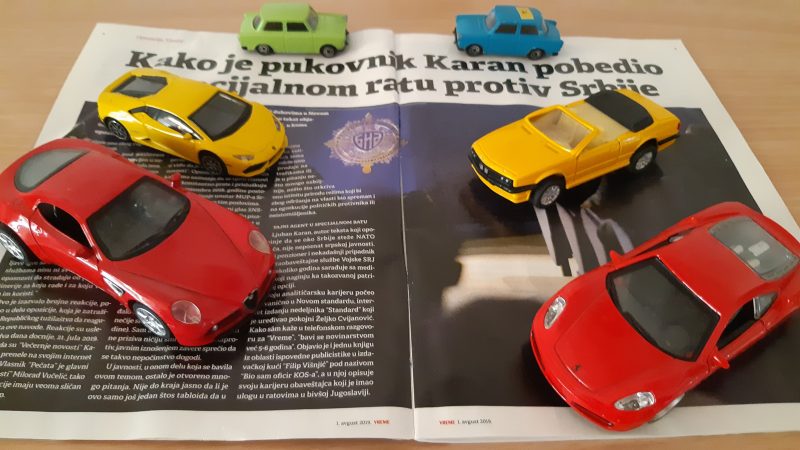 Vreme weekly article “How Colonel Karan won the special war against Serbia” analyzing the conspiracy theory about spy center in a car dealership, and toy cars. Photo by Meta.mk News Agency, CC BY.

Several Serbian media outlets have recently published an op-ed by a retired military officer in which he promotes a theory that many people see as conspirational or false. The theory claims that the intelligence services of the Balkan countries have congregated in a car dealership in Skopje, the capital of North Macedonia, to plot the assassination of Serbian opposition leaders and then blame the government for it, as part of a plot to bring down Serbian President Aleksandar Vučić.

The op-ed is signed by Ljuban Karan, a 66-year-old retired KOS (Counterintelligence service of the ex-Yugoslav People’s Army) colonel, and was originally published by the Serbian weekly newspaper Pečat on July 19. The article was then republished by several Serbian media outlets, such as Novi Standard, the tabloid Informer, and the Večernje Novosti, which is a state-owned newspaper whose editor-in-chief, Milan Vučelić, is also the owner of Pečat.

The op-ed is titled “Noose for Serbia” (original: „Омча за Србију“) and discusses the existence of a “special warfare” against Serbia lead by NATO, and a “new secret operation – Noose, which involves an elaborate plan for Serbia’s ruin,” as the article says. Karan says he has analyzed the possible scenarios for the demise of Vučić, and warns of the possible political assassinations of opposition figures (for which, he says, the government will be blamed). He writes:

If we ask ourselves who could be the target, it is only logical for it to be one of the opposition leaders, maybe even someone who is controlled by the West. From the point of view of waging a special war, it would be most effective to remove someone who is most vigorously attacking the current government. Someone who would be more useful dead, as a “political victim of the regime”, than as an unsuccessful opposition figure without people’s support. Those who are engaged in the dirty games together with the Western counterintelligence services are not even aware of the danger that they may suffer from the dirty machinery for which they work hard for and believe to have an use of.

Karan, who has long been a public figure in Serbia and often voices his anti-NATO positions in pro-government media, didn't name any sources in his article, nor presented concrete evidence to back up his allegations.

Speaking with the weekly newspaper Vreme (no. 1491) about his theory, Karan said his insight is based on “information published in the media” and his own interpretation. He didn't specify which media reports he used.

At a press conference, the leaders of the opposition party Alliance for Serbia (Savez za Srbiju) expressed concern that Karan's allegations amounted to threats against them and demanded an investigation. They mentioned that Večernje Novosti, one of the outlets that republished the op-ed, is state-owned, and also claimed to have evidence that they are being monitored by the Serbian Ministry of Interior since September 2018.

Speaking with Vreme, Karan said that he did not want to convey a death threat to the opposition, but merely to “warn” about the so-called special war against Serbia. 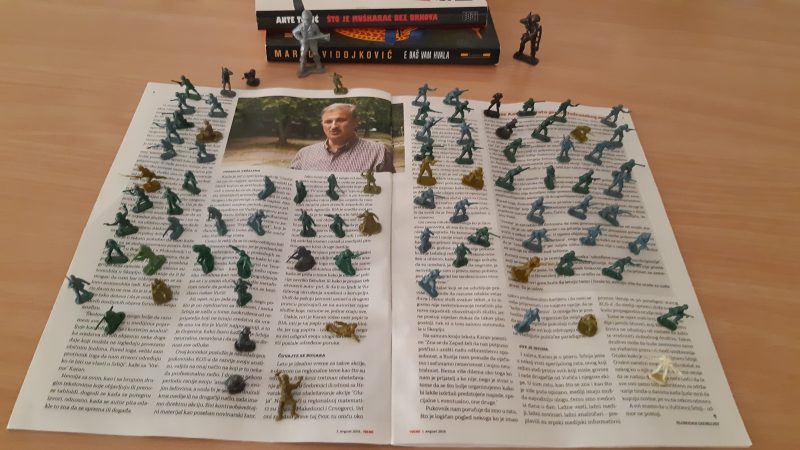 Vreme weekly article “How Colonel Karan won the special war against Serbia,” and some toy soldiers. Photo by Meta.mk News Agency, CC BY.

Karan stated that neighboring Croatia, Bulgaria, Montenegro, Albania, Kosovo and North Macedonia all participate in this plot against Serbia. He claimed that a group led by the CIA is operating out of a car dealership in Skopje. He writes:

Two months ago, the Bulgarian counterintelligence service became part of the joint special operation against Serbia, that is, roughly in the same period that the operation “Noose” was launched. Their operatives are working together with the counterintelligence agents from Macedonia, Albania and Germany from Skopje, a group most likely formed by the CIA, camouflaged as a car dealership.

A week earlier, on July 12, Serbian Progressive Party MP Milovan Drecun said on an interview on RTS (Serbia's national broadcasting channel) that the Macedonian Prime Minister Zoran Zaev should explain himself about the “strong intelligence team camouflaged as a dealership of the great Western car manufacturer in Skopje.” That seems to have been the first time such an assertion was voiced by a public figure, and it could have served as a basis for the retired colonel's claims.

The Macedonian public doesn't seem to be aware that there is a car dealership in Skopje that could be serving as the headquarters of an operation against Serbia. Such information has so far not been published in any Macedonian media outlet, even as speculation. Macedonian journalists have pointed out that if such a “camouflaged car dealership” existed in Skopje, it is unlikely that it would have remained undiscovered. In particular, this seems like something that wouldn't have gone unnoticed by the media critical of the current pro-NATO Macedonian government.

According to Vreme journalist Slobodan Georgijev, who interviewed Karan, it is precisely the existence of such articles that indicate that Serbia “is indeed involved in some kind of special warfare, but it is a war that the regime is waging against everyone who thinks, speaks and works differently from Vučić and his team”. According to him, in that war, the media plays perhaps the leading role. “Fake news, fake media, fake journalists, fake analysts – they have flooded the Serbian media space,” concludes Georgijev.

During the last few years, the term “noose” was used by several Belgrade tabloids, such as Informer or Srpski Telegraf, known for publishing misinformation about world conspiracies against Serbia. Those media would often promote the idea that the Serbian president was in danger, and variations of the phrase “the noose around Vučić’s neck is tightening” were common.