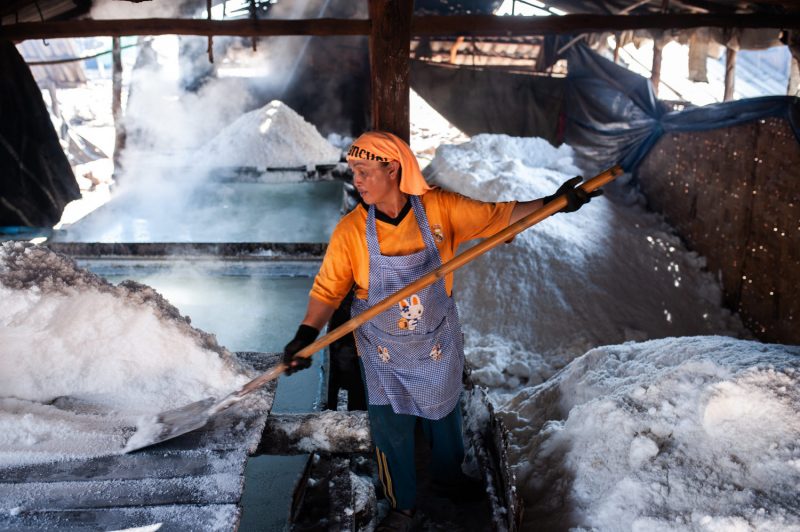 Open-pan salt cooking at a factory in Kut Ruea village in Sakon Nakhon province. The workers are paid according to the amount of salt they produce for the day– about 350 baht (11.3 US Dollars). Visarut Sankham/The Isaan Record

This edited article is from The Isaan Record, an independent news site in Thailand, and is republished on Global Voices as part of a content-sharing agreement. This story is a joint production between The Isaan Record and China Dialogue.

The future of a Thai-Chinese potash mine planned in northeastern Thailand is mired in uncertainty as villagers are putting up fierce opposition, fueled by concerns about livelihood security, health, and the environment.

After a protest group led by local women blocked access to drilling sites last year, the Chinese mining company filed a flurry of lawsuits against the villagers seeking 3.6 million baht (about 116,800 USD) in compensation

Eying the treasure of the Northeast

China’s global success in agricultural production is owed in part to a supply of cheap fertilizers. The country is the world’s largest consumer of potash, a natural mineral that boost yields and enhances crops’ water retention and disease resistance.

Chinese farmers depend on potash imports mainly from Canada, Russia, and Belarus. But as prices of the mineral remain high with a surge of almost 25 percent in the past year, the country has pushed to develop new and cheaper sources.

It turned its eyes on the rich potash reserves in Thailand’s Northeast region.

The region, which has long mined salt, is sitting on two major potash deposits discovered in the 1970s, known as the Khorat Basin and the Sakon Nakhon Basin. Yet in the following decades, the natural resource was left largely unexploited because of strong local opposition, environmental concerns, and legal restrictions.

After a military junta gained power in a coup in 2014, however, it announced plans to increase mineral resource extraction in the country to boost the economy.

China and Thailand are both looking for new potash supply sources to cut import and production costs. Thailand has potash but needs the help of the Chinese to extract it. It’s a Thai-Chinese collaboration that will benefit both parties.

In the rural district of Wanon Niwat in Sakon Nakhon province, people responded first with fear, and then with anger to the news of the planned potash mine. Local officials had failed to sufficiently inform the residents of 82 villages that their homes were now part of a mining area.

“The company had started exploring at two drilling sites but people in the community were left without any information about the project,” said Mali Saengbunsiri, a 50-year-old farmer and grandmother of four.

Farming communities in Wanon Niwat depend on the area’s fertile soils, rivers, lakes, and wetlands that form a delicate ecosystem which provides them with food and other resources.

Many villagers in the district worry that the mining project will destroy farmlands, damage the environment, and poison water sources, as well as imperil people’s health. Mali added:

Just imagine the impact of a huge industrial mining project here. The scary thing about salt is that it is capable of damaging just about everything.

Potash mining produces large amounts of salt as a byproduct that can pose a threat to the area’s soil, water, and animal life. In a region that already suffers from salt-affected soils, locals fear that the project will turn fields into barren land and kill off their crops.

If the rain washes the salt into rivers, lakes, and wetlands, few freshwater organisms can survive. It could end livelihoods based on fishing in the district’s Huay Thong lake, a body of water that is also the main water source for thousands of people. Mali said:

We worry that all the fish will die and the soil will be so salty that we can’t grow any crops on our land anymore.

We don’t know how the company intends to protect us from the dust and salty water coming from the salt mountain in the mine. How effective is it going to be?

The risk of salt dust being blown by the wind from the mine into closeby communities is raising concerns about the potential impact on people’s health.

Locals and experts are also concerned that large-scale potash mining will lead to the appearance of dangerous sinkholes. A rock salt operation in a nearby district caused one such hole that grew into a massive, 15-meter-deep pit the size of a football field.

China Ming Ta seeks to reassure local residents of its safety plans to alleviate these environmental and health risks. It pledges to implement measures to prevent the discharge of dust and salty water into the environment. 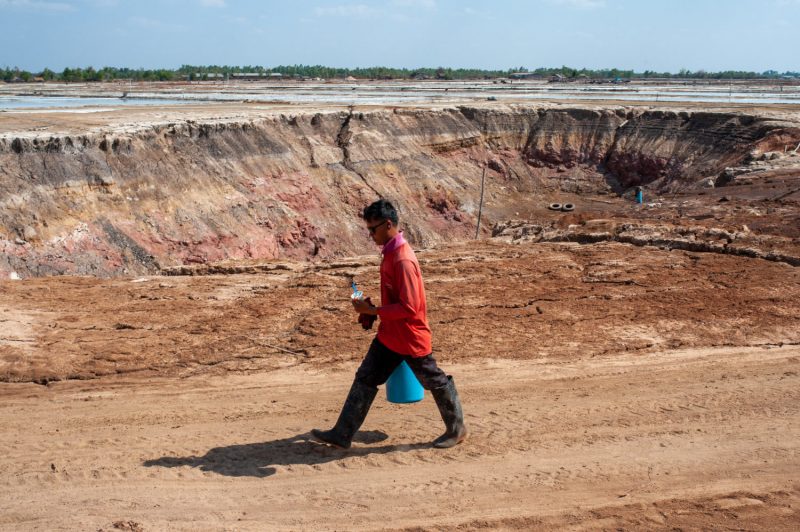 A small hole in the ground next to the salt farm close to Non Sabaeng village in Sakon Nakhon province grew into a 15-meter deep pit, the size of a football field. Sinkholes are common in areas of salt production where groundwater is pumped up to the surface over the years. Visarut Sankham/The Isaan Record

But the mining company’s assurances come too late to allay the fears of the people of Wanon Niwat. Fueled by the sense that fateful decisions had been made over their heads, villagers in the district organized an anti-mining group in 2016.

Led mainly by middle-aged and older women, the group has teamed up with activists, academics, and non-governmental organizations to oppose the potash mine. They put up protest banners, organized public forums, and submitted petitions to officials and the company to stop the project.

In February 2018, the group escalated their protest and blocked the road to the site of the fourth borehole, effectively stopping the company from moving drilling equipment into the area.

The company plans to set up 60 drilling sites in order to evaluate the quality of the potash before establishing the mine. Earlier, protesters also successfully blocked the site of the planned third borehole. This leaves the company with only two operational drilling sites. 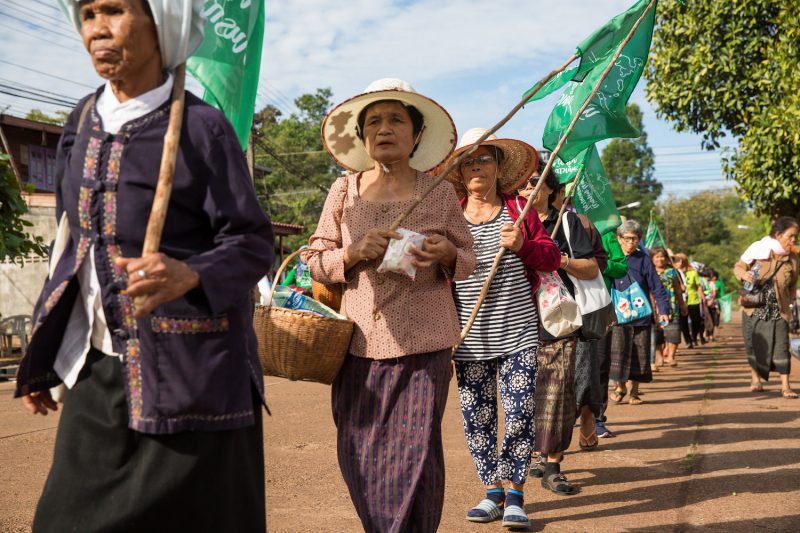 In December 2018, the group organized a five-day protest march under the banner of “Wanon Walk” through four districts of the province, drawing about 200 supporters. Photo by Luke Duggleby for MAIIAM Contemporary Art Museum.

In response to the local activists’ persistent opposition, the mining company took matters to court and filed a total of 20 lawsuits against nine members of the protest group.

The company claimed that the blocking of the drilling sites cost it five million baht (about 157,500 USD) each time.

China Ming Ta accused the villagers of illegal obstruction of their mining site, defamation, and a violation of the Computer Crimes Act for demanding an official investigation into the mining project on social media. The company seeks compensation of 3.6 million baht (about 116,800 USD).

But Sakkaphon Chaisaengrat, the protesters’ lawyer, argues that the villagers acted well within the law and only exercised their rights.

“The law allows people to publicly exercise their community’s rights to protect resources, culture and local ways of life,” he said.

Activists and experts in the Northeast argued that local conflicts over natural resource management would likely grow more severe after the Thai government enacted new mining legislation in August 2017 in favour of industry and mining.

Drafted and approved by the military junta’s appointed lawmakers, the new minerals act fast-tracks the approval process of mining concessions. The consideration period for permits was more than halved from previously 310 days to 100-150 days. 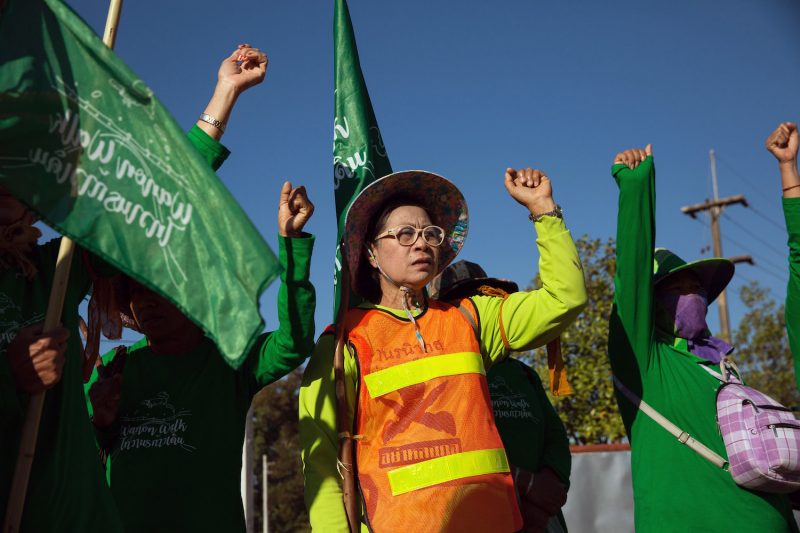 Despite the lawsuits filed against her group, Mali Saengbunsiri (middle) is determined to continue opposing the mining project. Photo by Luke Duggleby for MAIIAM Contemporary Art Museum.

But the junta miscalculated the level of resistance the potash mining project would incite among people of Wanon Niwat and elsewhere.

“We don’t want industry here!” said Mali. “We won’t let this area, abundant in natural resources, be turned into an industrial zone.”

In fact, across the region, local groups have been organizing against mining projects, including in the provinces of Nakhon Ratchasima, Chaiyaphum, Loei and Udon Thani.