Algeria: A victory on the pitch and in the streets

'Algeria are champions of Africa, but the fight for freedom goes on' 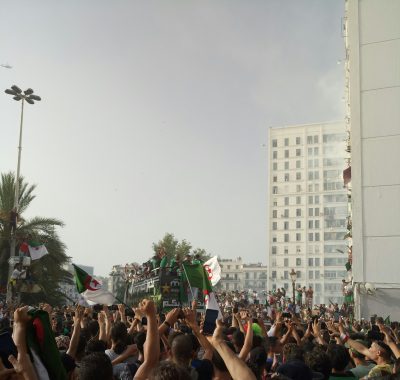 The Algerian football team is welcomed home on July 20, 2019, after winning the African Cup of Nations 2019. Photograph by Amina Grine and reproduced with authorization.

Algeria's men's football team are champions of Africa again after a 29-year hiatus, but their 1-0 win over Senegal in Cairo, Egypt, is much more than a sports victory. Inspired by the protests for political change that have gripped Algeria since February, the team's success has steeled protesters in return.

A Friday of high emotion

Friday, July 19, 2019, will go down in history as the night Algeria regained the African Cup of Nations. It also saw the 22nd consecutive Friday protest since the self-styled hirak (meaning “movement” in Arabic) began in February to oppose then-President Abdelaziz Bouteflika assuming a fifth consecutive term in office.

Though Bouteflika resigned in early April, demonstrations have continued across the country, and in France and Canada, where there are large Algerian populations. Now, protesters call for root-and-branch political change, rejecting the old guard of politicians associated with Bouteflika.

On the night of the final game, the whole country was glued to the action in Cairo. Baghdad Bounedjah scored early, and Algeria held their lead to the final whistle, upon which millions of Algerians poured into the streets to joyfully celebrate the long-awaited title. Madjid Zerrouky, a journalist for Le Monde, posted this video from the heart of the celebrations in Algiers:

The Algerian team showed great resolve to go through the tournament unbeaten, scoring thirteen goals and conceding two. The street protests of the five previous months had inspired them to win for the country, as midfielder Adlène Guedioura told the online newspaper AtlasTimes:

We've got used to the sound of the helicopters, but not the revolution they watch over. The 22nd Friday demonstrations have started in Algiers and they are special because Algeria are also playing the AFCON final tonight. And with that comes inspiration.

“No to the dictatorship and yes to the Africa Cup of Nations”, tweeted another young Algerian:

Protest songs, such as “La liberté” [“Freedom”] and “La casa d'El Mouradia”—an unofficial anthem of the demonstrations written last year by football fans criticizing Bouteflika's four terms in office—were sung in the streets on the day of the final and again when the team prevailed. During the final, the fans’ song rang out from the stands in the Cairo International Stadium. It was recorded by an Egyptian supporter in the crowd:

Since I’ve been away, allow me to share some of my favorite moments from #AFCON2019 final, the top one being Algeria’s fans singing La Casa Del Mouradia pic.twitter.com/OI68kWYA08

Paradoxically, Algerian authorities had actually tried to harness the football team's success to diffuse the spirit of protest gripping the country. They flew 4,800 fans on 28 planes to Egypt for the final. Many Algerians saw straight through the ruse:

Algeria are champions of Africa, but the fight for freedom goes on.

On the day of the final fans chanted “Tell them, ‘you will not shaft us with the match ball.’ Tell them we will take our freedom whatever the cost.'” #Hirak #Algeria #AFCON2019

Yazid Ouahib, chief sports editor of newspaper El Watan said that “the authorities reckon on reaping the rewards [of the victory] but are deaf to protesters’ demands. It is a form of corruption that will have no impact on the protest movement because the people have shown since February 22 that they will not be messed about.”

Their footballers’ success at the African Cup of Nations is a victory for all Algerians, which inspires the majority to go ahead and reform the country.

A second star [on the jersey] while we wait for the second republic.