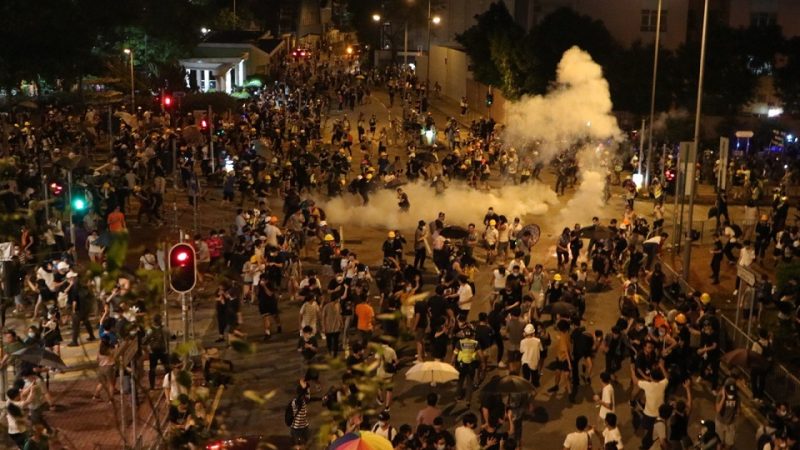 After the mob attack incident, when armed men in white-shirts stormed the Yuen Long subway station on July 21, 2019, Hong Kong's anti-extradition protests have transformed into a citizen movement against the Beijing-backed police authorities, who turned a blind eye to the violence of Triad, an organized crime allegedly responsible for the mob attack.

Who is behind the July 21 Yuen Long attack?

Video footage and testimonies have emerged in the past two weeks showing that the regional police authority in Yuen Long was notified of organized attack one day before the incident but did not take any action to disperse the mob, which started to gather in the streets at around 6 p.m.

The mob broke into the station platform at about 10:30 p.m. and two police officers were seen on video footage walking away from the chaos. The riot police arrived 39 minutes after the attack broke out, a little after 11 p.m., and the armed group left the platform. As soon as the riot police left, the mob launched a second attack and 45 people were injured.

A 7-minute-long Now TV video, which has since been removed from Facebook, showed high-ranking police officers who entered a nearby village to negotiate with Triad leaders the same night. After the meeting, however, a police representative told the press outside the village that they had not seen any armed men in white shirts. The attackers walked away from the platform after the attack and police authorities did not arrest anyone on the spot that night. The deferred arrest could give time for key suspects to escape.

Did @Facebook collude with Chinese and #HongKong gov't and delete evidence of police-triad cooperation in the 721 #YuenLong attack? Netizens found 7 minutes of NOWTV's FB news live mysteriously disappeared from the review, which showed white-clad thugs and police met. #AntiELAB pic.twitter.com/PKlylIiJlI

The police arrested 19 “white-shirts” so far and charged the violent attackers with the minor offense of unlawful assembly, which comes with maximum 3-year imprisonment). On the other hand, 44 anti-extradition protesters have been charged with rioting, with maximum 10-years imprisonment.

Evidence continues to emerge that China’s Liaison Office has worked behind the scene to coordinate the Yuen Long attack. Various media outlets, including the Hong Kong public broadcast RTHK, have sorted out a timeline leading to the attack:

A number of anti-extradition activists were attacked by mobs when they attempted to show footage of police violence in a park near Yuen Long subway station.

During an assembly in support of the Hong Kong police force, a pro-Beijing public figure, Arthur Shek, suggested to police supporters to use bamboo sticks and metal pipes to teach protesters a lesson.

Pro-Beijing lawmaker, Julius Ho, was seen on video footage shaking hands and giving a thumbs-up to key Triad members who led the attack at around 10 p.m. near Yuen Long station.

In reaction to the Yuen Long attack, more than 200,000 citizens rallied in Yuen Long on July 27 against the violent attack in spite of the police’s refusal to issue a protest permit. The illegal protest again led to the firing of tear gas and violent crackdown.

This time, instead of the white-shirt mob, riot police officers cornered protesters in the Yuen Long subway station, arresting 11 people and causing injury to 23.

17:23 Tear gas fired in front of an ambulance on On Lok Road in Yuen Long pic.twitter.com/l9fiK8eQYL

Kris Cheng from HKFP summed it up on Twitter:

On July 28, protesters held another rally on in Hong Kong Island, calling for an independent investigation of the causes and responsibilities of escalated conflicts surrounding the extradition saga.

As protesters walked toward China's Liaison Office in the Western district, riot police fired round after round of tear gas, pepper canisters and rubber bullets in Sheung Wan district near Central. At least 16 were injured and 49 people were arrested in the turmoil:

#HKFP From 9:38pm — After multiple rounds of tear gas were fired by police, smoke hangs in the air on the streets of Sheung Wan.

While the latest poll by the Hong Kong Public Opinion Research Institute found that 79 percent of respondents support an independent investigation into the extradition saga, the police authorities strongly oppose it. When Chief Secretary for Administration Matthew Cheung stated that he would not rule out an independent investigation and apologized on July 26 to the public over the Yuen Long attack, the Police Inspectors’ Association reacted with a statement calling for his resignation.

This Beijing-Hong Kong police alliance has escalated pre-existing tensions within the city. The Hong Kong government administration has not taken any steps to make peace with protesters because pro-Beijing hawks continue to ramp up an offensive agenda. The Hong Kong police are getting ready to deploy water cannon trucks to disperse the crowds in upcoming protests.

On August 1, the 92nd anniversary of the establishment of China's People Liberation Army (PLA), Chen Daoxiang, the PLA head in Hong Kong, stated that the army could not tolerate disruptive anti-extradition protests and was determined to protect national security and sovereignty.

The PLA released a propaganda video that same day stating in Cantonese that “all consequences are at your own risk,” while forcing back protesters in an anti-riot drill:

A blunt warning for #HongKong secessionists and their foreign backers? First, the PLA's Hong Kong garrison commander vowed to safeguard Hong Kong's stability; then shortly after, the #garrison said it has the confidence to protect HK. https://t.co/USZJcMKHue pic.twitter.com/MCO36XSRNT

Rumors began to spread about the deployment of PLA to clamp down on anti-extradition protests.

In an unprecedented twist, on August 2, about 20,000 Hong Kong government civil servants gathered in the central district, urging the administration to meet protesters’ demands to withdraw the extradition bill completely and set up an independent investigation.

Protesters remain determined and shifted to a flash mob protest strategy. On August 3, police fired tear gas across a large part of Kowloon peninsula, from Tsim Sha Tsiu to Wong Tai Sin, as protesters ran around and disrupted traffic like wild cats.

As seen in Wong Tai Sin district, after the protesters dispersed, hundreds of residents confronted riot police, charging them to leave the district: