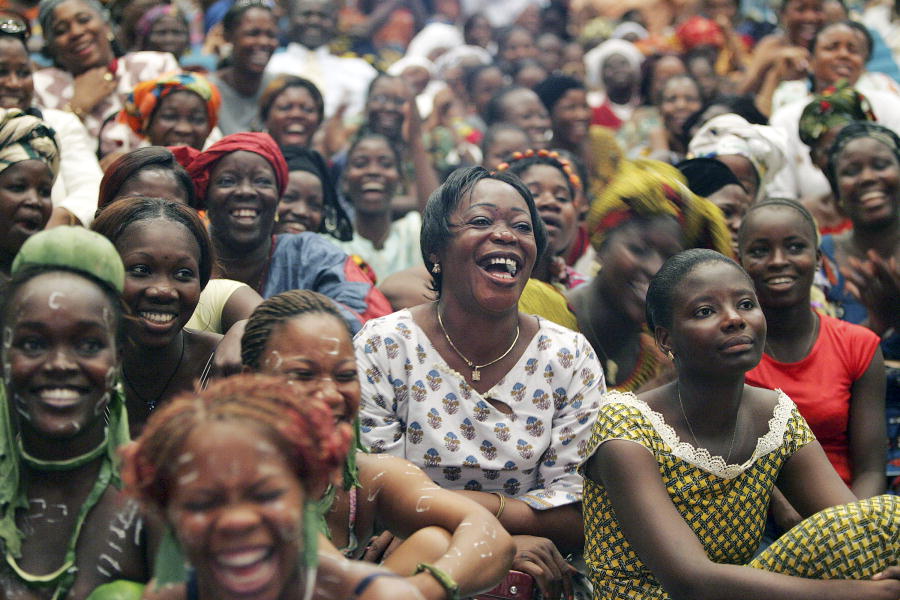 Women from all over Cote d'Ivoire gather to celebrate International Women's Day at the Palais de la Culture in Abidjan, the capital. March 8, 2005. Photo by Ky Chung/United Nations via Flickr, CC BY-NC-ND 2.0.

In July 2019, Mozambique and Cote d'Ivoire became the latest countries in sub-Saharan Africa to strengthen laws to empower girls and women.

On July 24, 2019, the Mozambican government passed the Law on Prevention and Combat of Premature Unions. This new law criminalizes girl child marriages. Any individual who officiates or authorizes underage marriages will be sentenced to imprisonnment for at least two to eight years. Any adult who enters a marital or sexual union with a child under the age of 18 will be imprisoned for at least eight to twelve years.

According to Mozambican Family Law (2004), the legal age of marriage is 18. It allowed for marriage at 16 with consent from parents, guardians or courts. Article 19 of this law forbids child marriage, yet, 48 percent of girls in Mozambique are married before their 18th birthday.

Mozambique is among the top ten countries in sub-Saharan Africa with a high prevalence of child marriages. This recently passed law eliminates the clause that allowed marriages under 18.

In 2017, the United Nations reported that drought drove families to marry off girls. Poverty, gender norms and adolescent pregnancies are the main factors behind girl child marriages in Mozambique.

The amendment comes on the heels of other reforms to end discrimination against parenting and pregnant teen girls. In December 2018, the Ministry of Education revoked a decree that banned adolescent pregnant girls from attending day classes and required them to study at night.

Netizens all over the world praised the Mozambique government for this step toward ending child marriage.

However, some worried about issues with the law, such as implementation and enforcement:

The problem in this case is enforcement. #Malawi got such a law years back, but 14-year-olds are still entering marriages

According to Human Rights Watch, Cote d'Ivoire is on the verge of passing new marriage reforms that will provide married women equal rights to household assets. It will also protect a woman’s right to inherit when her spouse dies.

Under the current Law on Marriage (2012) husbands administered all marital property. Married women were not allowed to manage or dispose of marital property. This includes property women inherit through marriage. The only provision to women is the right to provide consent over major transactions over marital property.

The new law will also provide married women with access to financial resources by allowing them the use of land as collateral. Traditionally, the husband registers land under his name and male village chiefs regulate all land-related decisions. Despite legal reforms and government initiatives to grant women the right to obtain credit, women were still not allowed to use inherited land as collateral — which made credit difficult to access.

Gaps still persist under this new marriage law. It does not protect marital property rights in non-formal marriages. Non-formal marriages include customary and religious unions, which are more common in rural areas. Women face frequent discrimination because male family members mediate all decisions and the unions are not legally bound.

The Cote d'Ivoire inheritance system highly favors men in all cases. Despite the Law of Succession, which grants both female and male surviving spouses, daughters and sons equal rights to inherit, widows from non-formal marriages do not inherit anything.

Cote d'Ivoire has been working to eliminate gender inequality and empowering women for years under former President Alassane Ouattara. In November 2012, the government passed a marriage law that made married women joint heads of households, but it was strongly opposed and ultimately led to the dissolution of his government. Yet, the Law on Marriage was adopted soon after the government dissolved.

Some netizens were quick to credit United States presidential adviser, Ivanka Trump, for the new reforms after Trump traveled to Cote d'Ivoire in April and visited a cocoa farm. She then spoke at a forum on women's economic empowerment, where she announced a $2 million project to support female cocoa farmers.

But other netizens were quick to point out that marriage reforms were already in the works long before Trump's visit:

The Ivory Coast has been debating the Marriage Law for many years. It was the current government that facilitated its passage…..NOT Ivanka. She did visit a cocoa farm though.

Throughout Africa, women continue to lead and produce in their homes and communities despite legal, financial and social discrimination, according to the 2015 African Gender Equality Index.

These new reforms take essential steps toward realizing a sub-Saharan Africa safe for all girls and women.