'I planned to offend Museveni because he has offended us for 30-plus years.' 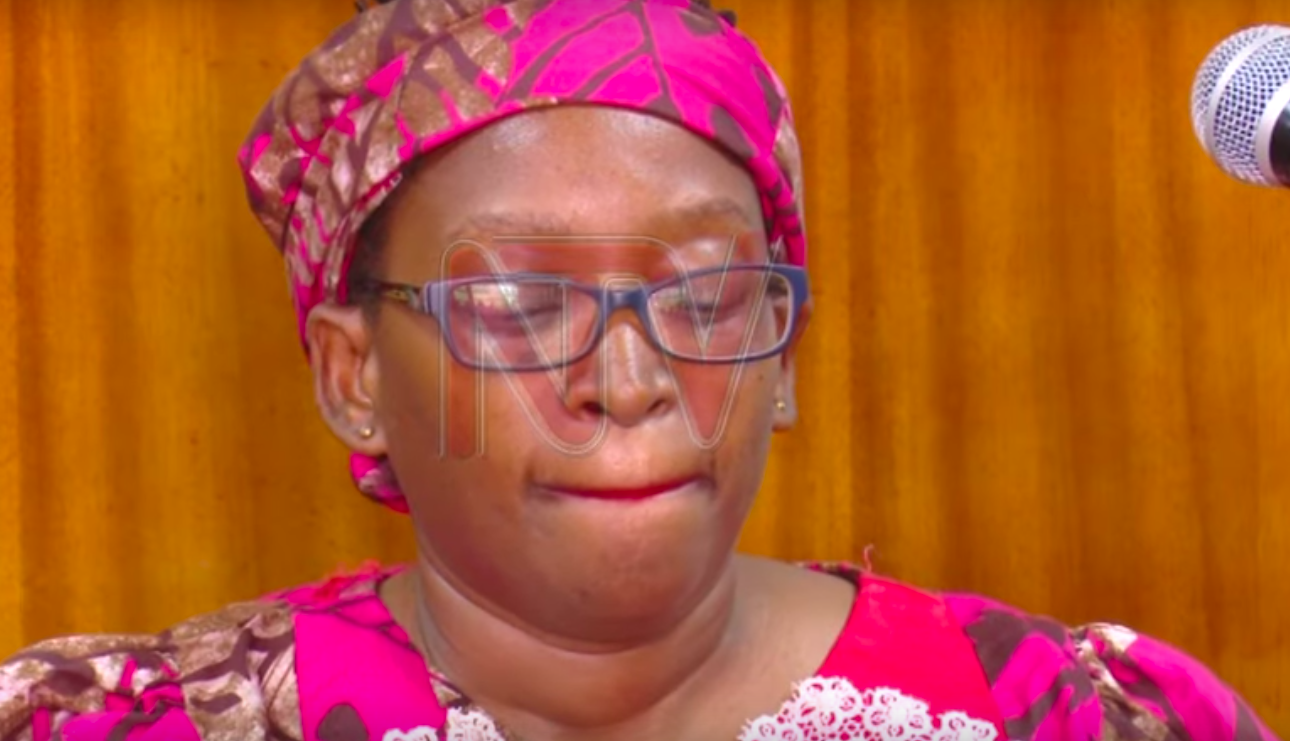 Stella Nyanzi is found guilty of cyber harassment for a poem she wrote criticizing the president in 2018. Screenshot from NTV Uganda, August 1, 2019, via YouTube.

On August  2, a court in Kampala headed by magistrate Gladys Kamasanyu sentenced feminist scholar and writer Dr. Stella Nyanzi to 18 months in prison after being found guilty of of cyber harassment—though innocent of offensive communication— under the Computer Misuse Act.

Nyanzi, known for using “radical rudeness” as a form of political protest, has been in prison for nine months after writing and posting on Facebook that criticized Ugandan President Yoweri Museveni. The poems makes several graphic references to Museveni's deceased mother's vagina and labia.

The magistrate stated that Nyanzi must serve nine more months in prison, where she has been held since November 2018. The sentence was read in absence of the activist, who refused to remain on a video conference after staging a nude protest in defiance. She accused the court of not affording her a fair hearing.

Stella Nyanzi @drstellanyanzi is on a screen rather than physically in the court room, but she just flashed her breasts on camera after shouting again and again “fuck you, fuck you” #FreeStellaNyanzi #PushforStellaNyanzi pic.twitter.com/Gwi6bgNzTy

Today, Dr. Stella Nyanzi was convicted of cyber harassment! For using ‘immoral words’ against dictatorship, corruption and nepotism. The same courts which have severally defended and shielded the champions of these ills have no moral authority to talk about morals. pic.twitter.com/q94M4EsmAq

On August 1, when Nyanzi was convicted, she gave more than 20 minutes of testimonial submission to the court, reiterating that she had no remorse and wouldn't beg for forgiveness. On her Facebook page, she published a poem where she declared: “I did not enter your Court for legal battle/I was already condemned before I came in.”

I WAS ALREADY CONDEMNED BEFORE I CAME IN.I did not come to your court for Justice.I came to continue poking the…

During the sentencing Nyanzi staged a nude protest and shouted obscenities, flashing her breasts on screen:

At her sentencing for harassing #Ugandan dictator Yoweri Museveni, feminist academic & activist Dr. Stella Nyanzi -who appeared via a screen – staged a nude protest & shouted “fuck you fuck you.” She is a revolutionary engaging in the “radical rudeness” of anti-colonial activists https://t.co/12PsMKzQyi

Stella said they brought her to dock in prison to hear her sentence against her will.

Nyanzi has used nude prostest before to show her indignation. probably first time anyone has stripped in court to protest the justice system in Uganda#FreeStellaNyanzi #PushforStellaNyanzi pic.twitter.com/8THTpXtfKe

Here are snippets from Stella Nyanzi's defiant testimony in court which may have been edited out of other newsfeeds:

‘My children are protesters’

I could talk about my children because very many mothers would say ‘Oh, I have children who are minors, please don’t send me to jail.’ Your honour, I will not say that. My children celebrate my virtuous action. My children are protesters I have trained to freely express themselves. My children are taken care of by Ugandans who believe in ideals that espouse.

‘Speaking in the language of vaginas’

‘We are tired of dictatorship’

‘I don't repent for anything’

I paid for my freedom of expression. I don’t repent for anything. I celebrate that one woman was bold enough to deploy a dead woman’s vagina. Send me to Luzira if my crime is [to tell] a dirty delinquent dictator that he is a dictator and that Ugandans are tired. And I wish his mother’s vagina hadn't squeezed him out.

‘Youth want to use their voices’

You say I am giving young people poison instead of food, giving them stones instead of bread, but the youth want to use their voices and speak whatever they have to speak. How do we teach young people in Uganda to remain silent, your honor?

‘The internet must be protected’

A wave of chaos — and support

A massive display of support for Nyanzi flooded social media as her defiant acts of protest continued during the sentencing, many using the hashtag #FreeStellaNyanzi

Africa Do you understand what is happening here. Stella Nyanzi is a fire that cannot and will not be tamed. May we all learn from her. #FreeStellaNyanzi#PushForStellaNyanzi
Thank you for keeping us updated Rosebell https://t.co/oGBnSMxoym

The powerful like to appropriate victimhood! Mbu Stella Nyanzi cyber harassed the most powerful man in the land. He isn't a private citizen whose affairs are unexpectedly now in the public sphere. He has insisted on remaining in the public eye, at public expense, for 34 years!

Amnesty International issued a statement in support of Nyanzi, saying:

Stella Nyanzi has been criminalized solely for her creative flair of using metaphors and what may be considered insulting language to criticize President Museveni’s leadership.

A packed courtroom turned chaotic after an empty water bottle was thrown at the presiding magistrate. Many young activists showed up in support of Stella Nyanzi along with key political opposition groups with an interest in protecting freedom of expression and free speech in Uganda:

Chaotic end to the sentencing, there were many protests in court we could barely hear the magistrate. In the end someone threw a bottle at her and she vacated her seat.