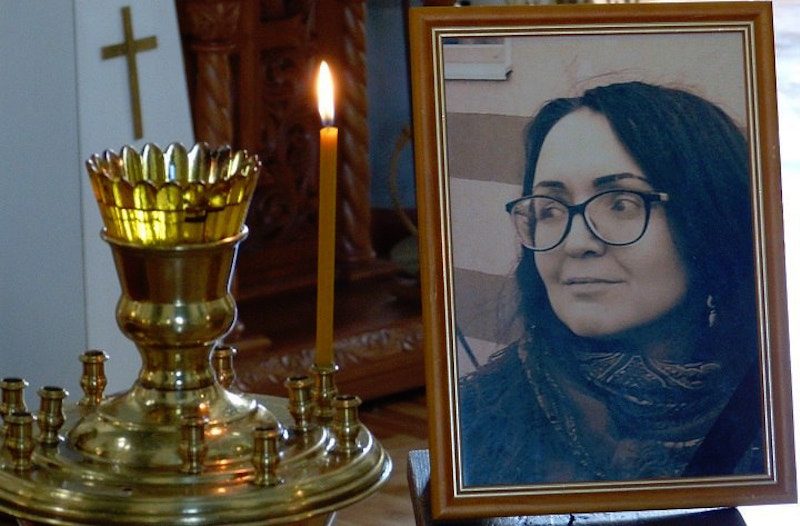 A photo of Yelena Grigoryeva at a church service in memory of the murdered activist, July 28, 2019. Photo courtesy of Valentin Nikitchenko.

When Yelena Grigoryeva’s body was discovered on July 21, it had been lying in some bushes outside her apartment building in St Petersburg for 12 hours.

That same day, the city’s investigative committee opened a criminal case into the murder of the 41-year-old LGBTQ+ activist. On July 25, investigators announced the arrest of a 38-year-old man from Kyrgyzstan on suspicion of the murder. Another suspect, known to this man, was detained on August 1. Police investigators claim that Grigoryeva had known her killer, and that the two had been drinking together on the evening before the murder. Grigoryeva had allegedly died in the course of a “sudden domestic dispute” with her killer, during which she was stabbed at least eight times in the back and face, dying from her injuries at the scene.

Grigoryeva’s friends and colleagues have been quick to share their grief and anger on social media, along with their suspicions about the police’s account of events. They suspect that she was killed for her activism; specifically her LGBTQ+ activism. Their comments were posted under the Russian hashtag #ЗащититеЛюдейОтПилы and the English hashtag #ProtectPeopleFromSaw.

I demand a thorough investigation. The state should not appease murderers. #ЗащититеЛюдейОтПилы

Many were quick to point out that Grigoryeva’s name had featured on what appears to be a hit list from the homophobic website “Saw Against LGBT.”

In St Petersburg there is still active pressure on activists. If earlier it was arrests and criminal charges, now it’s murder. The political activist Yelena Grigoryeva, a supporter of LGBT views and simply a person with an active civic position, has been killed. […] And I also want to remind you that Yelena was on the list of the homophobic site ‘Saw,’ which has been threatening LGBT-activists throughout the country for a long time already.”

While her colleagues said that Grigoryeva had reported violent threats to law enforcement before, the city’s branch of the Ministry of Internal Affairs insisted that she had filed reports related to “various conflict situations” – but not death threats. The St Petersburg activist Dinar Idrisov, who knew Grigoryeva personally, rejected this account:

Yelena and her lawyer had reported on violence and threats [of violence] to law enforcement agencies, but there was no discernible reaction. It was like they said “If they kill you – call us.” She wasn’t able to make that call.

Earlier this month, screenshots from the “Saw Against LGBT” website began circulating online after the group (named after the American horror movie franchise “Saw”) posted an “anniversary” message on July 1. Featuring a picture of a noose, the post outlined plans for anti-LGBTQ+ acts and promised “dangerous and cruel gifts” to dozens of Russian LGBTQ+ individuals, activists, allies, and journalists. Yelena Grigoryeva herself was among those who saw the group’s message containing her name. She even shared a screenshot of the threatening post on Facebook on July 3. 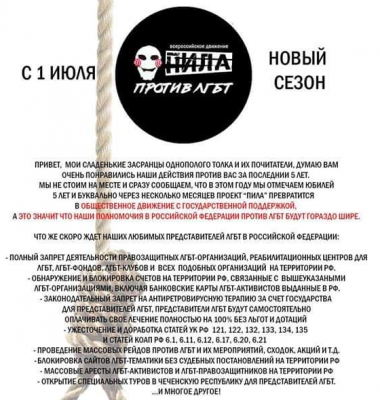 The list also named the independent newspaper Novaya Gazeta and Radio Svoboda, RFE/RL’s Russian language service, as well as several civil society organisations. The Yekaterinburg LGBT Resource Centre also reported receiving a threatening email from “Saw” on July 16. The Resource Centre has formally requested that local police investigate the email as a hate crime, and has previously been successful in persuading courts in the Sverdlovsk region to issue fines for homophobic comments on social media.

Following complaints by the Yekaterinburg-based NGO, the “Saw” website was blocked on July 17. LGBTQ+ rights activists have apparently been trying to get the authorities to investigate who is behind the website since it first appeared in spring 2018. Furthermore, the site has been responsible for leaking personal data on activists and anybody known or presumed to be LGBTQ+, and allegedly even offered to pay “gay-hunters” to attack people.

Grigoryeva’s death came as a shock to others whose names appeared on the “hit list.” On July 23, YouTube star Andrei Petrov shared his reaction on Instagram, stating that although he had initially dismissed the list as a “provocation,” Grigoryeva’s killing made him fear for his life. In a video the following day, Petrov shared the first threatening email he received from an alleged member of “Saw,” telling him to transfer money into a Sberbank account if he wanted to “avoid a gift.”

On July 28, self-described “openly gay” Youtuber Zhenya Svetsky shared what he called his “last video” in response to Grigoryeva’s death, saying he feared for his life because his name had also appeared on the list. In an accompanying Instagram post, he explained that he had been receiving threats from a member of “Saw” since February and that on June 20 he was given a month to leave Russia.

According to the Kharkiv Human Rights Protection Group, a Ukrainian NGO, the appearance of more hate speech against Grigoryeva online in response to her murder is further evidence that she may have been targeted for her activism. For example, self-proclaimed anti-gay “civic activist” Timur Bulatov referred to Grigoryeva’s murder as a “moral Jihad” and asked “who’s next?” on social media.

Nikita Tomilov, a lawyer and human rights activist, shared one of Bulatov’s posts with the words:

Here’s a message I just received today on Wattsap [sic] from Timur Bulatov about the murder of Yelena Grigoryeva. I am more than certain that Bulatov has a connection to this murder. I now call on all LGBT organisations and human rights defenders to file a statement requesting an investigation be opened into Bulatov’s involvement in the “Saw” group.

Social media posts dedicated to Grigoryeva’s memory also include photos demonstrating her extensive involvement in activism. After moving to St Petersburg from her hometown of Veliky Novgorod, Grigoryeva became a prominent member of the Alliance of Heterosexuals and LGBT People for Equal Rights, an organisation defending LGBTQ+ rights in Russia. Grigoryeva also opposed Russia’s annexation of Ukraine’s Crimean peninsula in 2014, speaking out on behalf of Ukrainian political prisoners jailed in Russia and against repressions against Crimea’s Tatar population. More recently, she demonstrated in support of the Khachaturyan sisters – three teenagers who are being charged with murder for killing their father after suffering years of physical and sexual abuse.

However, Grigoryeva’s background has also prompted debate over her political leanings. Grigoryeva was known to have supported nationalist causes in the past, and a July 2016 photo Grigoryeva posted to the popular Russian social network VKontakte displays a tattoo on her arm, which she described in the comments as “a matryoshka with a machine gun and the Odal rune.” Although the Odal rune is a symbol associated with Nazi movements, Grigoryeva’s colleagues claim that her political leanings had shifted towards more “right liberal” views over the years

Whether these attacks, threats and now the murder are linked to her political views, which changed from nationalist to right-wing liberal and LGBT, to her undoubtedly active lifestyle, character and patterns of behaviour – is absolutely unimportant. Every person has the right to life. And the Russian state was obliged to guarantee her the right to life

On July 23, dozens of people, including Grigoryeva’s friends and colleagues, took part in “solitary picket” protests in St Petersburg to mourn her death. Their demand is that the authorities seriously consider the idea that Grigoryeva was murdered for her political views. The next day, LGBTQ+ rights activists from  Vykhod – a St Petersburg organisation (whose name is translated on their site as “Coming Out”) offering free psychological and legal support to the LGBTQ+ community – formally requested that police investigate the “Saw” group’s possible involvement in Grigoryeva’s death.

Grigoryeva was buried at a village cemetery in Russia’s Novgorod region on July 28.

But Saw’s story might not be over yet. “They think that they’ve blocked our site and that now we won’t be able to find an audience, that we won’t be able to attract the people. We’ll start soon. Everybody’s interested to find out who’s next,” reads a message posted on July 31 by one of the group’s Telegram channels.