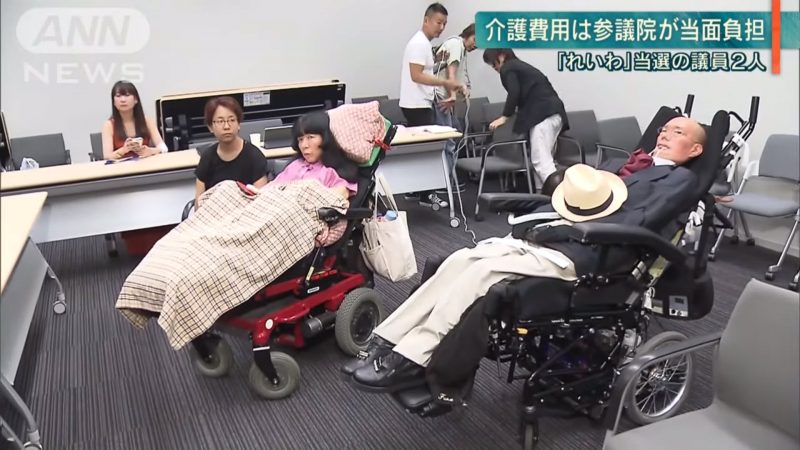 On July 21, 2019, Japan elected 124 out of the 245 members of the House of Councillors, the parliament's upper house. While the ruling Liberal Democratic Party (LDP) lost 9 seats, opposition parties did not achieve the hoped-for breakthrough. Although Japan's political status quo appears to remain in place, the July election did shine a spotlight on barriers that people living with disabilities face as they try to participate in daily life.

Representing a newly formed political party, Kimura Eiko and Funago Yasuhiko were elected to Japan's upper house. Kimura lives with cerebral palsy and is largely paralyzed below the neck, while Funago has spent nearly twenty years living with Amyotrophic Lateral Sclerosis (ALS), a progressive neurological disease where patients gradually lose control of most of their muscles. Both Kimura and Funago rely on motorized wheelchairs and caregiver support in order to carry out daily tasks.

The pair were elected to Japan's national proportional representation block of seats, instead of to a local electoral district. They ran as part of Reiwa Shinsengumi, a new political party led by Yamamoto Taro, a populist politician who actually won more votes than any other candidate in the proportional representation segment of the election. The new political party was allocated two seats and had prioritized Kimura and Funago, and so Yamamoto, an incumbent, lost his seat in the Japanese Diet.

The barriers Kimura and Funago immediately encountered following their election provide a concrete example of what Kimura was fighting for in her campaign, according to her election slogan, “to create a society where disabled people can live in the community” (障害者が地域で生きられる社会に). For example, their motorized wheelchairs are too large to enter Diet chambers

Newly-elected Eiko Kimura and Yasuhiko Funago cannot attend the Diet, and it's not down to wheelchair access. Both receive severe disability home care not offered to those who work (and Diet attendance qualifies as work). The issue is under discussion. https://t.co/zJiw85eu00 pic.twitter.com/kdIsRfbufW

Michael Peckitt, an academic, commentator on disability issues and Global Voices contributor says the size of the duo's motorized wheelchairs highlight a general lack of government policies and regulations that realistically lower barriers for people living with disabilities in Japan.

“What does ‘barrier-free’, or perhaps more specifically ‘wheelchair-accessible’ mean for the Japanese government?” says Peckitt. “For example, as far as the government is concerned, when it comes to hotel rooms, a room is considered ‘accessible’ if its doors are 70cm to 80cm.”

Peckitt says that the official dimensions outlined in Japanese government regulations in no way accommodate every wheelchair user, and because of that they have been constantly subjected to legal challenges.

In addition, the newly elected Kimura and Funago also cannot physically manipulate the buttons used for votes in the Diet, and their care aides are barred from entering parliament to help them. Both lawmakers can be barred from the Diet as they technically violate strict parliamentary dress codes.

Following the July 21 election, parliamentary committees quickly promised to amend dress code rules for the duo, and also allow their aides to accompany them in Diet chambers. As well, the Diet quickly began work to modify its facilities to accommodate Kimura and Funago.

It's not clear if the Japanese Diet will cover the cost of care aides whose help makes it possible for Kimura and Funago to do their jobs — it's estimated that it will cost 1.3 million yen (US$12,000) per month. Until they were elected in July, Kimura and Funago received a subsidy for care aide fees through government insurance. However, under the government insurance scheme, Kimura and Funago's employment as Diet members constitute “economic activities”, which do not qualify for government subsidies. Without help from the Diet, the pair will have to self-fund their daily care while carrying their activities as elected representatives.

So far, the Diet committee responsible for setting and administering rules that govern eligible expenses for Diet members has refused to reimburse Kimura and Funago for caregiver fees, and will instead consult with the government to find a solution for these costs.

The difficulties Kimura and Funago are experiencing with financing the support they need highlights a common hurdle people living with disabilities face in Japan when trying to participate in the workforce.

“In general, while at the workplace the company is responsible for disabled employees’ personal care, it's an extra hurdle for those with disabilities to find an accepting workplace,” says Josh Grisdale, a Canadian-born Japanese citizen and accessibility consultant who is conducting a survey about accessibility in Japan on behalf of Japan Tourism Agency, in an online interview with Global Voices.

“As policymakers get a closer look into the realities of employment with a disability, hopefully laws will change and it will become easier for those with disabilities to participate more fully in society,” he added.

Grisdale says that any policy that reduces the financial burden on both employers and workers to pay for care will create a more equitable system that will help more people living with disabilities to participate in the workforce.

Japanese companies are required by law to ensure 2.2 percent of their workforce is made up of disabled employees. However, while the number of disabled employees has increased year-over-year, less than half of Japanese companies claim to have reached the 2.2 percent target. On top of that, in 2018 it was discovered that some companies — including 28 government ministries and agencies — are likely padding or overstating the number of disabled workers they employ, making statistics suspect.

“Our two lawmakers have not entered parliament yet, but already they are making (the chamber) barrier-free,” said Reiwa Shinsengumi Party leader Yamamoto Taro in an interview following the election. “Even if we are smaller than the number two opposition party, I think we can have a big impact.”