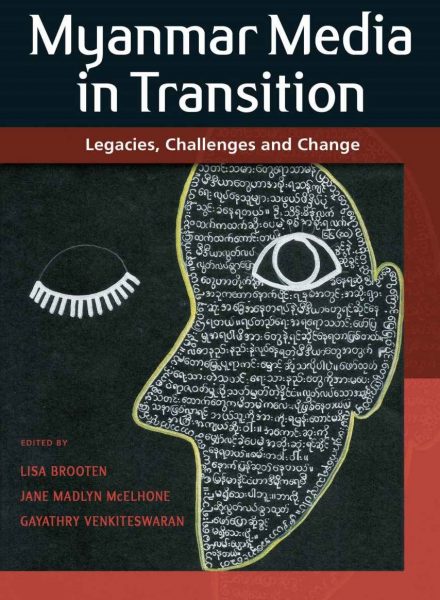 The image on this book’s cover is entitled “Twilight”, and was created by Myanmar Media in Transition contributor Eaint Thiri Thu. As she explains, twilight is the period between daylight and night, before sunrise or sunset, transitioning us to the light or the dark. Myanmar’s freedom of expression is at its twilight, between darkness and light, hope and despair. Photo and description of the book cover provided by Gayathry Venkiteswaran, used with permission.

A new book launched in June 2019 offers a comprehensive discussion about the history and the current state of the media landscape in Myanmar.

The book, entitled “Myanmar Media in Transition: Legacies, Challenges and Change” was co-edited by Lisa Brooten, Jane Madlyn McElhone, and Gayathry Venkiteswaran. It includes contributions from Myanmar-based scholars, researchers, members of civil society groups, artists, and journalists who wrote about the impact of the country’s political transition on free expression.

Myanmar, formerly known as Burma, was ruled by a junta for several decades until reforms were implemented in 2010, which allowed the restoration of civilian leadership. However, the military has remained dominant in the bureaucracy. In 2015, a national election saw the landslide victory of the former opposition National League for Democracy (NLD) headed by Nobel Laureate Aung San Suu Kyi.

Gayathry Venkiteswaran, one of the book’s editors, gives a brief overview of the book in an email she wrote:

The book is multidisciplinary and it combines both theoretical and empirical discussions and we have a mix of academics and practitioners who have contributed to the volume. Many of the chapters draw from the work done by civil society groups and other experts on the ground, but we try contextualise these within the history of politics and media in Myanmar and how best we can understand these developments. The volume includes analyses and commentaries about journalism and its challenges, music and film making, the popularity of Facebook and how it affected political discussions and the role it played in the Rakhine crisis, the gaps in the legal frameworks as well as important reflections on the influence of media assistance on the media and civil society in the country.

She mentions the Rakhine crisis which refers to the rise and spread of communal violence that has displaced thousands of ethnic Rohingya in northwest Myanmar. She also adds that the work of the book's authors focuses on aspects of the political transition that have not been previously given emphasis in other studies:

Much has been written about the political change since 2010 but this is the first volume focused on media, which goes beyond journalism and includes creative expression as well as digital technology in Myanmar. How the transition or political change will play out is difficult to predict but we felt it was important to document the experiences of change affecting the media and hopefully, this will spark conversations about the future of the industry in the country.

More importantly, she also emphasizes the value of understanding the history of the media, and the role it played in the democratic transition:

On the transition itself, we do challenge assumptions held about the situation in the country. For example, there are many who thought Myanmar did not have independent media or practitioners before the opening, or that media development models in other countries would work in Myanmar. A core thesis of our volume is the need to take a historical and contextual approach to understanding the changes taking place, whether these are positive or negative. 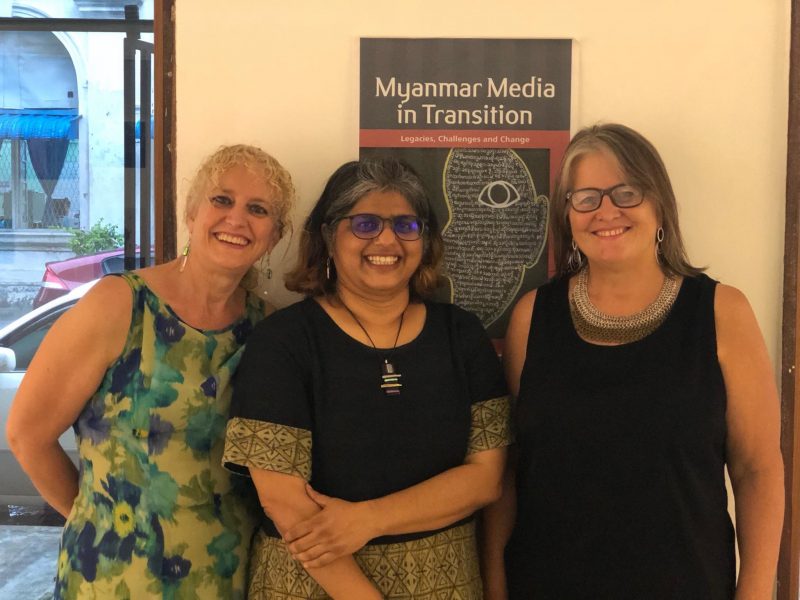 The editors of the book (left to right): Lisa Brooten, Gayathry Venkiteswaran, and Jane Madlyn McElhone. Photo used with permission

One of the challenges the editors faced in completing the research was the continued use of junta-era policies and laws by the supposedly reformist NLD-led government to intimidate critics of the military:

There was a lot at stake in terms of the political change and when the NLD government came into power, expectations were high that there would be significant improvements for the media and freedom of expression. But as many of the contributors noted, while the space for expression did open up, the threats against journalists and activists did not reduce. On the contrary, the use of laws, whether Section 66(d) of the Telecommunications Law or the Penal Code, Unlawful Associations Act and the Official Secrets Act has shown that the democratically elected government is deploying the same tactics as the previous regime.

This posed a difficulty in gathering sources which also reflects the state of free speech in the country:

While most people were open about their opinions, some were reluctant to identify themselves when interviewed as they were concerned about their own safety. Several contributors note in their chapters how self-censorship and the culture of fear continue to be a problem, especially where criticisms involve the military and even NLD leaders.

The book’s editors acknowledge the need for more research, especially on the ownership of media, and analyses of the Myanmar-language media. Meanwhile, they hope that the book “will inspire other studies and conversations among stakeholders whether in or outside the country, and contribute towards debates about political transitions and media reforms.”

The book has already been launched in Yangon, Myanmar and in Bangkok, Thailand. The book and its selected chapters are available online.

This article was amended on 5 August 2019 to mention the correct name for Jane Madlyn McElhone.