Threatened with demolition, Albania's National Theatre continues to resist despite a police raid 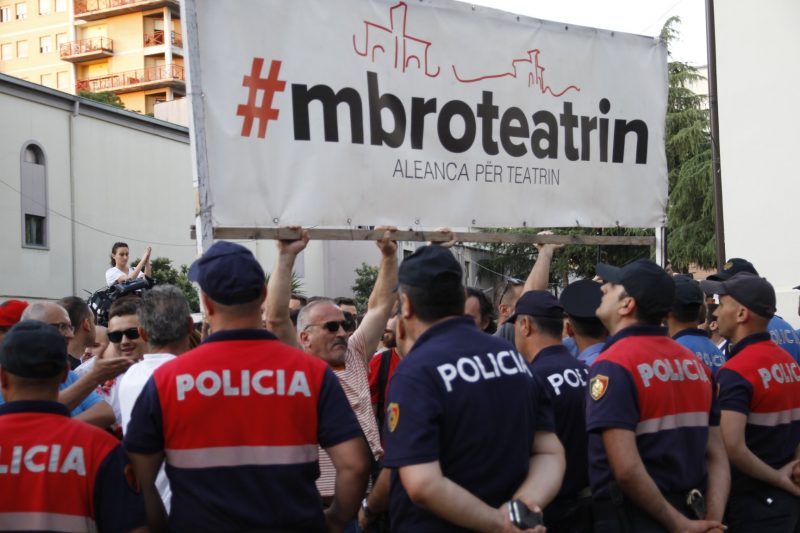 Protesters in Tirana holding a sign with the hashtag #mbroteatrin meaning “Protect the theatre.” Photo courtesy of Rudi Erebara, used with permission.

In Tirana, an ongoing protest against the planned demolition of the National Theatre reveals deep social and political divisions affecting Albanian society that still struggles with issues of corruption and police violence nearly 30 years after the fall of Communism.

Dozens, and sometimes hundreds of activists and artists have kept organizing protests since March 2018 around the main building of the National Theatre in downtown Tirana. The demonstrators, who gather on a daily basis in the evening, have turned the square in front of the theatre into a space for public debate. Indeed the discussions and signs displayed on banners are not limited to opposing the government's decision to demolish the building, but extend to questions of growing autocracy, the lack of rule of law, and the loss of independence of a number of state institutions that explain a massive migration of Albanians outside of their country. In a context of social apathy, media capture by the state and oligarchs, the square in front of the theatre has become a symbol of freedom of speech.

The protest turned into a permanent demonstration on July 18 as two leading figures of the theatre, director Robert Budina and famous actor Neritan Licaj were informed by colleagues of the Administration of National Theatres that a final order had been given by the government to remove all assets from inside the building with the help of police forces encircling the theatre. While there was uncertainty about the validity of this information, Budina decided not to take any risks and requested the Alliance for the Protection of the Theatre, a group of activists and volunteer supporters, to organize 24/7 teams of 40 to 50 activists patrolling around the building to prevent police entering the theatre.

The issue escalates as protesters clash with police forces

On July 24 around 7 AM, Albanian police forces did eventually show up in a group of 30 to 40 members. They were supported by 10 security guards belonging to a private company, according to activists who witnessed the event. Following the police intervention that led to the removal of assets inside the building, activists later entered the theatre which as they describe, looks now as if “it had been ransacked by Talibans”. 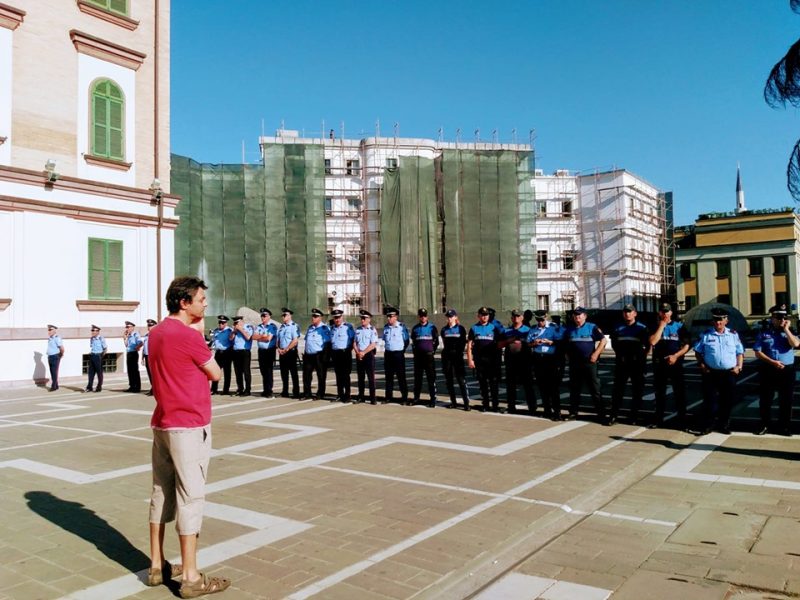 Edmond Budina, film director and actor with a 20 years experience in the theatre, was also pushed by the police and broke into tears, saying that “this building is not only spiritual, it has also witnessed history”. 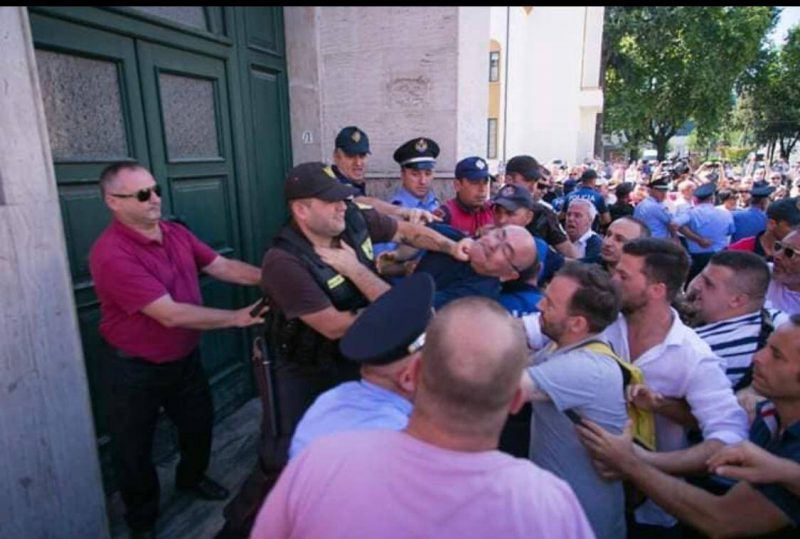 Artist and activist Robert Budina manhandled by police at theatre's gate. Photo courtesy of the Alliance for the Protection of the Theatre, used with permission.

As the Alliance called citizens to join them in the protest, the police started encircling the building at around 3 PM on the same day. Hundreds of citizens gathered and confronted the police. Several members of the theatre, as well as supporters clashed with the police that responded with violence. One protester was taken to hospital for treatment.

Artists and activists remain inside the Albanian National Theatre tonight after storming past police and into the building today, fearing the govt’s plan to demolish it will soon come to fruition.

More protesters have gathered outside and are trying to push past police cordons. pic.twitter.com/dfWX3WyiPD

The situation escalated as several protesters remaining inside were prevented by the police that blocked the main entrance to receive food and water. By that time the authorities had cut electricity and water supply to the building. Eventually, some protesters managed to break the police chain and enter into the theatre.

In the evening hours, the police finally left the premise, perhaps because on the following day, a high-ranking official from the Organization for Security and Cooperation in Europe (OSCE), Thomas Greminger, was paying visit to the government that wanted to give an impression of stability.

On July 24, the Prime Minister of Albania, Edi Rama tweeted this about the protest:

“The new National Theatre is demanded by the capital, the country, the nation, and most of all the community of scene artists. As the new National Stadium, it will be a milestone in the path of Albania we want. Those who disagree are respected, yes they do not have the mandate nor the right to obstruct that path””

Erion Veliaj, the mayor of Tirana, mocked in a tweet his predecessor Lulzim Basha, who is the leader of the opposition, for joining the protest:

Good news that after all these years of the theatre of politics, LB visits the theatre for the first time – I do not believe the ashes blocks are similar to any theatre in the Netherlands, where the last is Theatre de Stoep!

But just like [other projects] such as the playground of the lake park, the Boulevard and the main square, Tirana will win again!

On July 25, Basha met with the protesters and signed a public agreement with them promising to support the Alliance to prevent the demolition of the theatre by giving it the status of protected monument. This move created a controversy challenging the independence of the Alliance.

When members of the Alliance learned about Greminger's visit, they decided to address him publicly via social media.

We, the Alliance for the Protection of the Theatre, a group of artists and citizens which have come together to protect the National Theatre building in Tirana, kindly request, and would be deeply honored, to have a meeting with your delegation during your visit here. While to the outside public the issue of the National Theatre might seem a local one, we can guarantee you that it is in fact the singular most concrete embodiment of the Albanian political crisis.

Greminger responded via Facebook, saying that though he has not time, he is aware of the situation, and that in relation to the special law about the theatre, all parties must wait for the Supreme Court's ruling before proceeding further with this issue. He also tweeted his answer tagging the Alliance in Twitter. A few hours later however, both the comment on Facebook as well as the tweet he made were deleted. The next day, on 26 July, he made a new comment on Facebook moderating his previous comment, claiming his response was taken out of context:

I am concerned to see that my response to a public invitation has been taken out of context. My advice to all parties was and is to show restraint and to give institutional procedures the time needed to allow for a decision on a sensitive and politicized issue. I am convinced that Albanian institutions will be able to solve this legal dispute, in full accordance with the rule of law and democratic principles. The OSCE, and I personally, remain committed to supporting the reform process in Albania.

Despite various attempts of political appropriation, the Alliance for Protection of the Theatre continues its 24/7 protest. As images of the police violence have circulated over social media, the issue has regained visibility in spite of the lack of political TV shows during the summer vacation period, and the absence of citizens  who have chosen to go on vacation.

At the moment, the public debate has shifted towards this new agreement signed with the opposition, which uses it to make wider promises to other target groups. The situation is further complicated by the low support for the government, expressed with the low turnout of only about 22% (according to government sources) during the June 30 local elections. The opposition, which boycotted these elections, claims the turnout was even lower, while the final official results are still pending.

The issue of the theatre, including the apathy of the many Tirana residents who had not joined the protesters who hold 24/7 vigil–due to various reasons, including intimidation–therefore serves as microcosm reflecting the overall issue of peril for democracy in Albania.

Editor's note: The author of this post is an active member of the Alliance for the Protection of the Theatre.