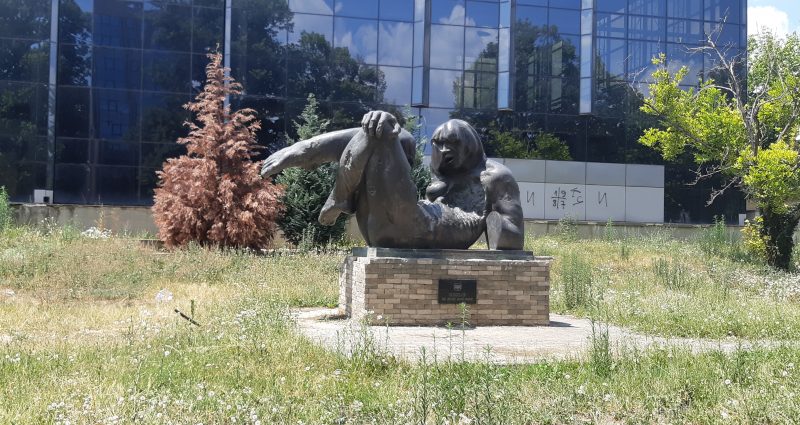 Monument to the victims of the 1963 earthquake in Skopje. Photo by GV, CC BY.

Every July 26, citizens of Skopje, the capital of North Macedonia, remember the earthquake that shook the city in 1963, and express gratitude for the international action that helped rebuild the city. The 6.1-magnitude earthquake reduced much of the city to rubble, killing 1,100 people, leaving over 200,000 homeless and thousands suffering from serious injuries. At the time, Skopje was the capital of the Socialist Republic of Macedonia, a constituent state within federative Yugoslavia.

A massive humanitarian effort to help the survivors and rebuild the city mobilized all the republics of the Yugoslav federation as well as the international community, which at the time was otherwise divided due to the Cold War. US President John F. Kennedy personally intervened to cut through the red tape and expedite US humanitarian aid, while USSR PM Nikita hrushchev visited the ruined city with Yugoslav leader Josip Broz Tito. Within days of the disaster, American and Soviet soldiers flew in to work side by side to provide humanitarian aid.

Architects, engineers, and construction workers from across the world worked under auspices of UN to rebuild the city into a model modernist metropolis. As a result, Skopje was nicknamed ‘the city of international solidarity.’ The UN's plan for the city was only partially implemented, but many of the brutalist-style buildings from the era remain today, and many streets still carry the names of the countries, cities or individuals who helped, including Algiers, Mexico and Prague.

This year's commemoration of the earthquake is enhanced by an exhibition in Krakow, Poland that displays the artworks donated by Polish artists at the time as part of the relief effort.

Poland was a major contributor to the disaster recovery efforts, harnessing the experience gained through the reconstruction of cities like Warsaw which were devastated during World War II. Top Polish architects helped build the iconic Museum of Modern Art, and there's still a street bearing the name of architect Adolf Ciborowski.

After Ambassador Jacek Multanowski arrived in Skopje in 2014 as Poland's highest diplomatic representative, he and his wife Kinga Nettmann-Multanowska researched the Polish legacy and discovered, at Skopje's Museum of Modern Art, a unique collection of 20th-century Polish art donated by the artists after the earthquake as a gesture of solidarity. This ‘time capsule’ had been virtually forgotten in Poland. Over time, the couple uncovered many other cultural links, leading to further public discourse through exhibitions and  publishing of books and other works. Some of that work is documented in the short film “Skopje. The Art of Solidarity.”

In an email to Global Voices, Mrs. Kinga Nettmann-Multanowska and Ambassador Jacek Multanowski explained the drive behind their efforts that have connected countries and time periods: 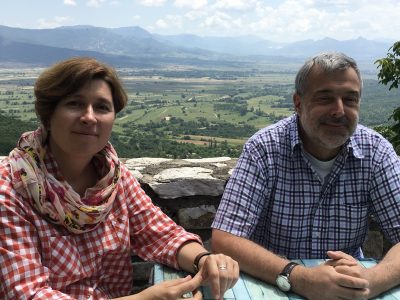 Kinga Nettmann-Multanowska and Jacek Multanowski during his tenure as Polish ambassador to Macedonia. Courtesy photo, used with permission.

Skopje must look familiar to people who have lived or spent some time in Warsaw. Destroyed and rebuilt. The same mix of styles, a similar urban space. And, on top of that, scattered around the two cities are the “islands” of modernist architecture, which we, Poles, began to rediscover just a few years ago. Post-war architecture (after 1945) has become a fashionable topic in Poland – redefined, mainly by young people. Today, some of these buildings, until recently abandoned and neglected, are considered examples of functionality and elegance. They are receiving a second life, and with that comes their new function: cafes, galleries, centers of culture and urban activity.

The 1963 earthquake that destroyed Skopje moved the whole world, including Poles, whose great engagement should not be surprising. Only 18 years before WWII had ended, leaving Warsaw totally destroyed. The rebuilding of the Polish capital started immediately, with great devotion and enthusiasm.

We are too young to remember the emotions accompanying the gestures of solidarity shown by Poles in Skopje, but we met people who told us about it. In their memories Skopje, the city that attracted professionals from all around the world, was cosmopolitan, open and modern. And it was in that spirit that the city was created anew after the earthquake.

We, thanks to our Warsaw experience, have been able to find this spirit in today's Skopje. The Polish heroes of the reconstruction: Adolf Ciborowski (Manager of the UN Skopje Urban Plan Project), “Tigers” (a team of Warsaw-based architects: Wacław Kłyszewski, Jerzy Mokrzyński, and Eugeniusz Wierzbicki; designers of Skopje’s Museum of Contemporary Art), Stanisław “Agaton” Jankowski (head of the “Polservice” team elaborating the Skopje urban plan), alongside numerous artists who donated their works to the city in a gesture of solidarity, are no longer alive. But it was they and the others who gave Skopje its identity – “the city of solidarity”, which is and should be its authentic and natural “brand”.

Ambassador Multanowski's posting to Skopje ended in 2018, but the family has continued to educate the public about this remarkable connection. As a result, the International Cultural Centre in Krakow is currently hosting an exhibition titled Skopje: City, Architecture and Art of Solidarity, presenting the forgotten heritage directly to the Polish citizens in their ancient capital. The multimedia display is open between 7 July and 20 October 2019, featuring 70 works of painting, sculpture, drawing, and printmaking. The unique value of the exhibition lies in its large selection of photographs, documentary films, architectonic models and urban plans. 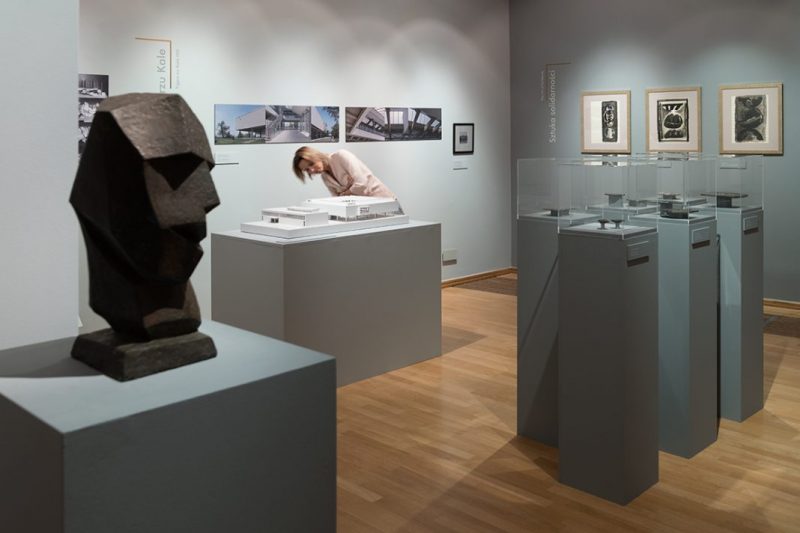 Part of the exibition Skopje: City, Architecture and Art of Solidarity. Photo by International Cultural Centre in Krakow, via Meta.mk.

Skopje was one of the key cities featured in the New York Museum of Modern Art's 2018 show Towards Concrete Utopia, an exhibition that investigated a” unique variety of architecture in Yugoslavia in the period 1948–1980 and its specific yet multidimensional character.” Several buildings and models displayed in the New York show are part of the Krakow exhibition.

Between 2006 and 2017 the right-wing populist government of the VMRO-DPMNE party, led by current fugitive from the law Nikola Gruevski, tried to re-brand Skopje by imposing so-called baroque as the city's signature style, in keeping with  their particular brand of narrow nationalism and perceptions of what a European capital should look like.

Gruevski's regime minimized the cosmopolitan character of the city, instead turning it into the ‘capital of kitsch”, as it was called in various international publications, under the aegis of a rebuilding project named Skopje 2014. Even a monument to the earthquake victims that stood in a park in next to the city museum was relocated to a the periphery of the city center to make room for ‘baroque’ buildings that the then prime minister claimed would ‘beautify’ the area.

Restoring Skopje's legacy as international city open to the world would become a rallying point for the pro-democracy resistance movement. Activists organized protests to save landmark buildings like the City Shopping Center from the government's plan to retrofit them with ‘baroque’ facades. It became an annual tradition within the wider Macedonian online sphere to mark the anniversary of the earthquake and reconstruction period by sharing photos and information using the hashtag “Skopje remembers” (#СкопјеСеСеќава).