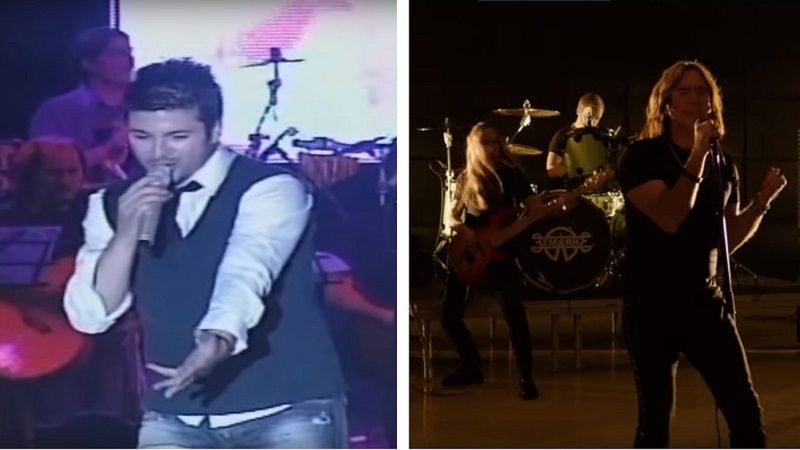 A series of online articles in North Macedonia have blamed the Russian rock group Zemlyane for plagiarizing a 2007 song made famous by the late Macedonian pop star Toše Proeski.

Starting on Friday 19 July 2019, several Macedonian outlets have been posting different versions of the song to prove their point, topped by headlines such as “Russian band plagiarized Toše's song, they promote it as their own,” or “Toše has become a victim of plagiarizers: a Russian band stole his song.”

While certain media outlets put the word ‘stole’ in quotation marks, others used terms like ‘appropriation.’ Dozens of such articles expressed outrage, including the newspaper Nova Makedonija that cried out  “Shame on you for stealing and destroying Toše's song.”

The song in question is called “Bože čuvaj ja od zlo” (“God, protect her from evil”) made popular by the Macedonian singer Toše Proeski (1980-2007) who died in a car accident shortly after its release. References to death and parting in the lyrics have since added to its inherent emotional charge among fans.

Proeski's death at the age of 26 came as a shock in the Balkan region, because he was one of the few music stars who became a celebrity due to the high quality of his performance, but also because of his integrative approach. Unlike most stars from the Balkans, he sang in different local languages, published his albums in several countries, and cooperated with musicians from Greece, Serbia, Croatia, Slovenia, Bosnia and Herzegovina, Italy, and the UK. Coming from humble origins, he used his celebrity to support humanitarian causes, and starting in 2004 he served as UNICEF National Ambassador for Children.

The website VBU Muzichki registar (“VBU Music Register”), which operates as an authoritative public database for Macedonian music production (with functionalities similar to IMDB), has documented over 20,000 tracks by over 3,500 performers, and lists the data for all the participants in the making of the album “Games beyond borders” which features the song. Accordingly, the author of the music is Miro Buljan, a renown Croatian composer, while the author of the lyrics is Antonija Šola, a famous Croatian actress, singer and songwriter known across the region. The album and the song were released in two versions, in Macedonian and in Croatian.

The song by Zemlyane, published on 26 February 2019 is called “Bože” (“God!”). The Youtube video description claims its text was written by Vladimir Kiselev, and that the author of the music is Vladimir Trushin.

The Russian band, whose name can be translated into English as “Earthlings,” was established in 1978. It has enjoyed a long career, as well as great popularity particularly in the early 1980s as part of the “VIA” (vocal-instrumental ensemble) wave. At the time it introduced Western rock elements in the Soviet music industry.

In 2014 a fan published a video including the Croatian audio version of the song “God protect her from evil” with a dubbed Russian translation in honor of Toše Proeski. She wrote:

My translation. An awesome singer! Enjoy the beautiful melody, the lyrics, the meaning and his voice!

Other fans have provided translations of this particular song into 15 different languages from Arabic to Ukrainian via the platform LyricsTranslate.

While no music or court expert has been quoted by the media to allege plagiarism, the music and the lyrics of both the ‘originals’ and the Russian song are strikingly similar. For instance, the chorus in Macedonian reads:

God I don't need anything else
While I'm alive under this sky
A warm bed and the eyes I know
God, please send your heavenly angels
She won't return
Just protect her from evil,
She has no one on this world.

While the chorus of the new song by Zemlyane reads:

God, I need so little light
I just ask the answer from the sky
Forgive her, hold her, but let go.
God, how do I need a little
Know the light of her road
Do not leave her alone on the way,
help her and protect her…

While reusing melodies across borders and making song covers for commercial purposes is not uncommon in Central and Eastern Europe, within the music industry this is usually done with attribution of the original authors. For instance, when the Russian band The Peace Dukes made a cover of a song by Yugoslav/Serbian band Bajaga i instruktori, they stated that clearly in the description of their video. Publicly known copyright infringement cases in the region usually involve the material rights (piracy), and not the moral rights (misrepresenting other people's songs as one's own).