Puerto Rico celebrates in the face of an uncertain future. 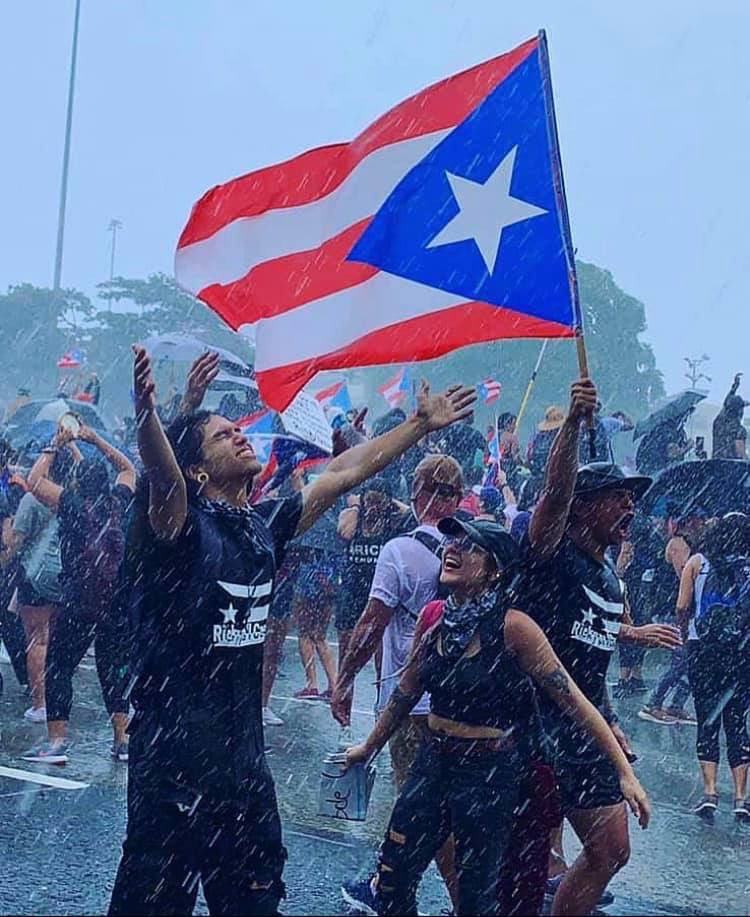 Protesters rejoicing in the rain on July 22 in San Juan, Puerto Rico. Photograph taken by Fabián Rodríguez Torres and shared on his Instagram account (@fabianfrt). The author published a Facebook post in which he grants permission to the general public to use the picture, which was widely circulated on social media. This particular image was taken from the Twitter account of social worker Larry Emil Alicea-Rodríguez (@larryemil).

The governor of Puerto Rico, Ricardo Rosselló, has resigned after two weeks of massive protests and intergenerational civil unrest. In the abscence of a secretary of state, Secretary of Justice Wanda Vázquez will become governor. Rosselló's resignation is effective as of 5:00 p. m. on August 2.

This self-convened and growing national movement erupted as a result of an intricate corruption scheme and a leaked Telegram chat containing sexist, misogynistic, homophobic and body-shaming language, along with the discussion of public policy among members and non-members of Rosselló's cabinet.

The leaked Telegram chat was preceded by the federal arrests of high ranking members of Rosselló's administration, including the former Secretary of Education, Julia Keleher, on charges which include money laundering, wire fraud and theft, among others.

The 14 consecutive days of demonstrations included daily protests at the governor’s mansion. The protests soon spread to many other municipalities of Puerto Rico. The largest was held on July 22, estimated to have attracted as many as 600,000 people in San Juan alone.

#FunFact of this march in #PuertoRico. It wasn’t scheduled by any organization. It happened organically in social media by #PuertoRicans who wanted to protest against #Rosselló, demanding his resignation. #ParoNacional #News #ParoNacionalPR #RickyRenuncia ?:@NoticentroWAPA pic.twitter.com/gpLBXPhbPY

But the activity wasn't limited to Puerto Rico. Several protests were convened in countries where Puerto Ricans are resident, including Spain, Argentina, Slovenia, France, The Netherlands and the United States.

??THREAD: All the original ways in which Puerto Ricans have said #RickyRenuncia

The police have been accused of using excessive force, violating the police reforms ordered by Federal Courts. It must be said that the protests in Puerto Rico have been exceptionally peaceful, as pointed out by cultural anthropologist and essayist Rima Brusi on Twitter:

500000 marching, and only five arrests, at the very end? I’d say the protesters were not only non-violent- they were remarkably disciplined, creative and restrained. #RickyRenunciaYa pic.twitter.com/T1DyXaJRHQ

Protesters also returned the following day to areas where protests were held to help clean up:

Things they won’t show you in the media because they want you to think the worse:

1- people cleaning the damage done last night
2- a united people giving each other a hand pic.twitter.com/Q0hBD7HYCP

But several days before the news broke of Rosselló's resignation, Xiomara Torres Rivera, a columnist writing for the jounalism project Todas, reminded readers that the real work would start once the governor left office:

Today we are the focus of the world's attention because we dared to turn words into action, to transform our anger into mobility. To demand [the governor's] resignation is only the beginning. We have before us a lot of reflecting to do to be able to take other decisions and not look back. To dare to demand the country that we deserve. A citizen audit, a cancellation of the [public] debt, an education with gender perspective, decent healthcare and retirement and a government with individuals who put the needs of the people first.

Global Voices will continue to cover this developing story.