Ukraine’s politicians are eager to win hearts and minds online 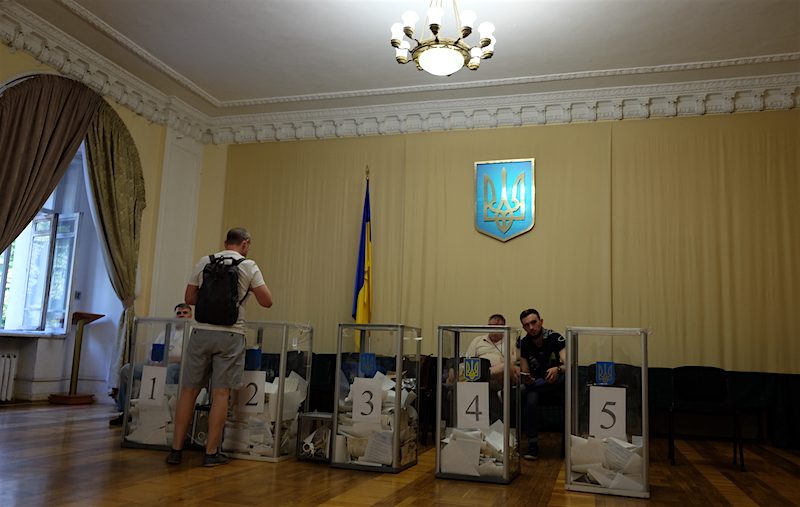 On Sunday July 21, Ukrainian voters went to the polls to vote in a snap parliamentary election, called after President Volodymyr Zelensky, elected in March 2019, announced a controversial decision to dissolve the parliament during his inauguration.

Online misinformation, cyber-attacks, and the overall threat of external interference in the election were not last minute concerns; these issues were raised several months before the election. Ultimately, the election passed without major disruptions; Zelensky’s Servant of the People party took a majority of seats in parliament. So while some of these concerns turned out to be unjustified, the role of the internet in Sunday’s elections was more important than ever; according to 2019 data from the country’s State Statistical Service, 26 million Ukrainians are online and at least half that number actively use social networks.

Ukrainian social media users have always actively discussed political topics online; the 2014 Euromaidan protests were famously sparked by a single Facebook post. This year, which also included a presidential election in March, was no exception. According to analysis by Internews Ukraine and data analytics company Singularex, Sunday’s elections provoked a tsunami of activity on social networks, with election-related posts surging immediately after the announcement of the parliament’s dissolution.

The most widespread hashtags were ‪#‎вибори2019 (“2019 elections”); supporters of Servant of the People used the hashtags #зробимоїхразом (“let’s beat them together!”) and #зедепутат (“Ze[lensky]Deputy”), while supporters of the Golos party led by popular singer Svyatoslav Vakarchuk used ‪#‎КомандаЗмін‬ (“team of change”).

Interestingly, social media users were not too optimistic about the upcoming elections, with negative rhetoric towards all parties dominating 42% of Facebook posts identified as “political” during the analysis, while positive rhetoric was found in only 15% of the posts. 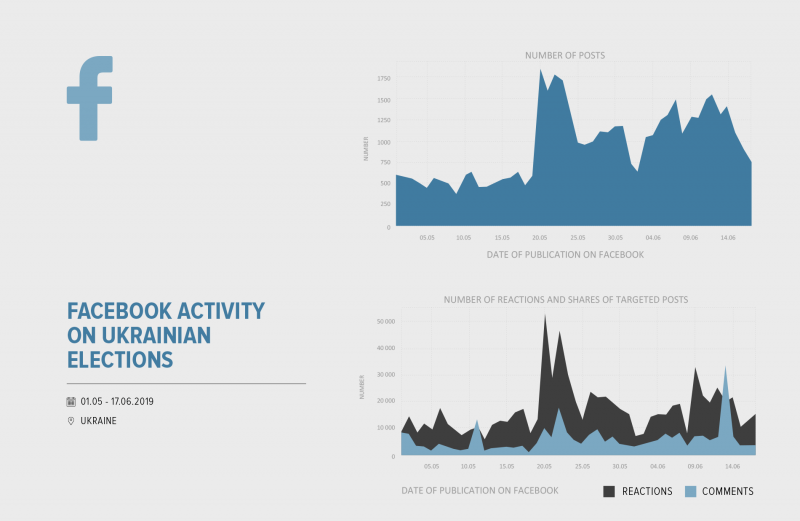 The dynamics of elections-related Facebook posts in Ukraine during May 1 – July 17, 2019, according to analysis by Internews Ukraine and Singularex. Used with permission.

Nevertheless, with Facebook becoming the country’s leading social network after the 2017 ban of Russian social media sites, negative rhetoric hardly deterred politicians from targeting the country’s 13 million active Facebook users. This tactic comes as no surprise given that the success of Zelensky’s presidential campaign on a few months before was partially attributed to engaging with younger voters online. At the same time, parties and candidates also actively used Instagram, YouTube, Twitter, and messaging platforms such as Viber and Telegram.

Alongside the increasingly sophisticated targeted advertising services provided by Facebook and other platforms, current Ukrainian election legislation does not distinguish between online and offline campaigning. It does not establish clear mechanisms for candidates to report nor for regulators to monitor expenses allocated towards Internet advertisements. Such legal loopholes provided for very little oversight over electoral contestants’ online activity, especially in the sphere of political advertising.

In fact, according to election observers, this year Ukrainian politicians used social media and particularly Facebook for campaigning more actively than ever before, with 40,427 political ads published on the social network during the active campaign period. In total, this cost all election contestants more than $1,800,000. 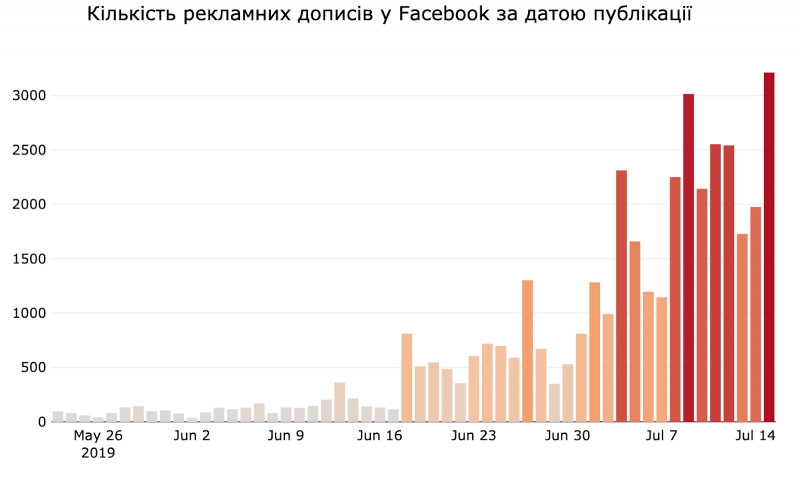 The growth in number of ads identified by Facebook as “political” during active campaign period in Ukraine. Graph by OPORA. Used with permission

Having reviewed interim campaign finance reports by political parties, domestic watchdog OPORA noted substantial discrepancies between the data from Facebook’s advertisement library and the amounts which some Ukrainian political parties had declared they had spent on online advertising.

Moreover, alongside campaigns by parties and candidates, OPORA recorded an increase in the use of promoted posts with elements of so-called “black PR” (deliberate spreading of negative information against particular candidates), sometimes by Facebook pages not clearly affiliated with any political force. At the same time, a coalition of media monitors stressed that over half of the political parties and their leaders used hate speech and aimed to discredit their opponents in their Facebook posts.

Alongside advertisements on social media, the five parties expected to take seats in parliament used a variety of other online methods to engage voters. For instance, some urged voters to provide their phone numbers, subscribe to mailing lists, join Viber or Telegram messenger channels, engage with their messenger bots to receive information about the party or observe elections, or install mobile applications. Most of these mechanisms would provide subscribers with information about the party and its candidates, their election platform, and the latest news, as well as basic information about voting. In addition, some parties also used their websites to actively recruit members, volunteers, and candidates. 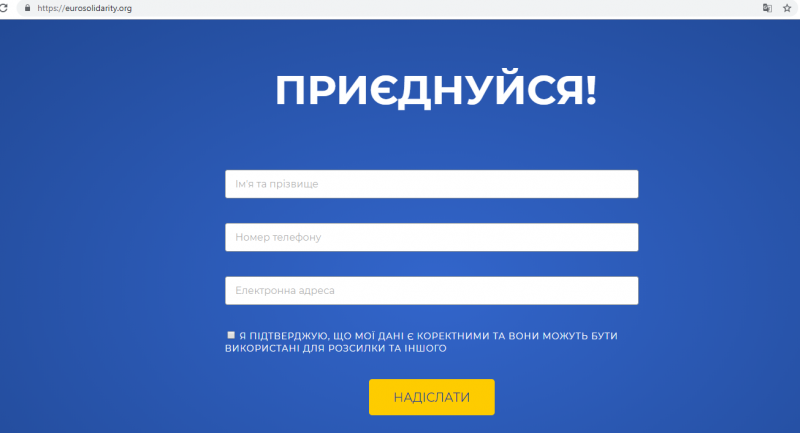 A screenshot of the European Solidarity party’s online voter sign up form, with a consent box to use voter data “for the mailing list and other”.

For example, although Ukrainian internet users sometimes debate the risks of their data being collected by Russian online platforms and tools, it seems that very few think about how their data is being collected and used by domestic actors.

All five leading political parties during the election asked voters for their contact information online. Among them, only two parties (Golos and Servant of the People) provided users with detailed privacy policies outlining such details as what would happen with their data after elections or the use of cookies on their websites, though only Servant of the People asked for users’ explicit consent for processing their personal data in a separate field. Two parties (European Solidarity and Fatherland) asked users to join their mailing list but did not provide much detail about how their data would be processed. One party (Opposition Platform – For Life), whose main website uses a simple HTTP protocol, failed to specify how the data provided by users would be utilized at all. Given that new technologies constantly provide politicians with new forms and methods of campaigning, election observers have already called on the Ukrainian authorities to update legal regulations around online political advertising and other methods of digital campaigning.

However, the fact that two newly established political parties went as far as to develop detailed privacy policies for their online supporters indicates that the Ukrainian public’s consciousness around data privacy and security is slowly changing for the better.