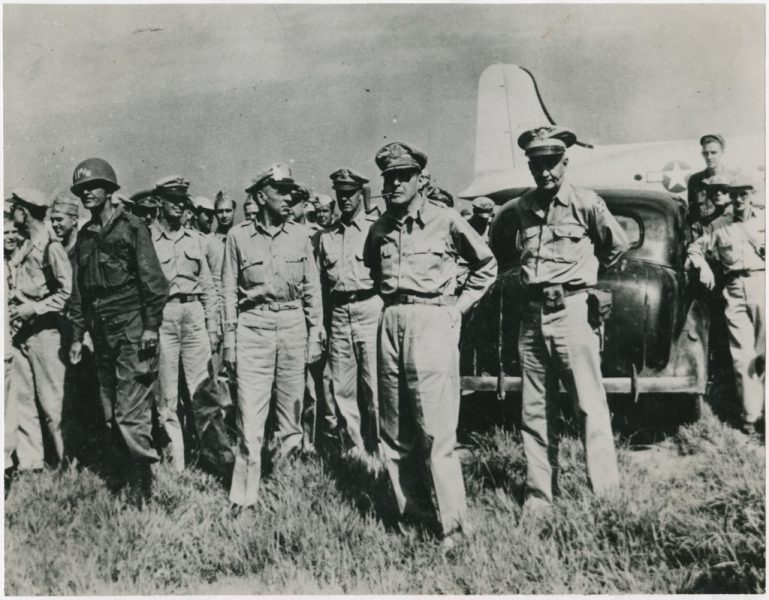 Caption: “General MacArthur alights from a C-54 at Atsugi airfield, 20 miles out of Tokyo, / for his first glimpse at Japan.” Photo was likely taken by a Photo Division SCAP photographer and in turn collected by Ted Akimoto during his time in Japan with SCAP. Courtesy of the Theodore Akimoto Family Collection. CC BY-NC-SA 4.0

A collection of photos available online provides a glimpse of a postwar Japan living under Allied occupation forces and struggling to rebuild.

The Theodore Akimoto Family Collection features more than 250 photographs, some taken by Theodore Akimoto, with others collected by the photographer during his time serving with General Douglas MacArthur, the Supreme Commander for the Allied Powers (SCAP), who ruled Japan as a virtual dictator for several years after the war. 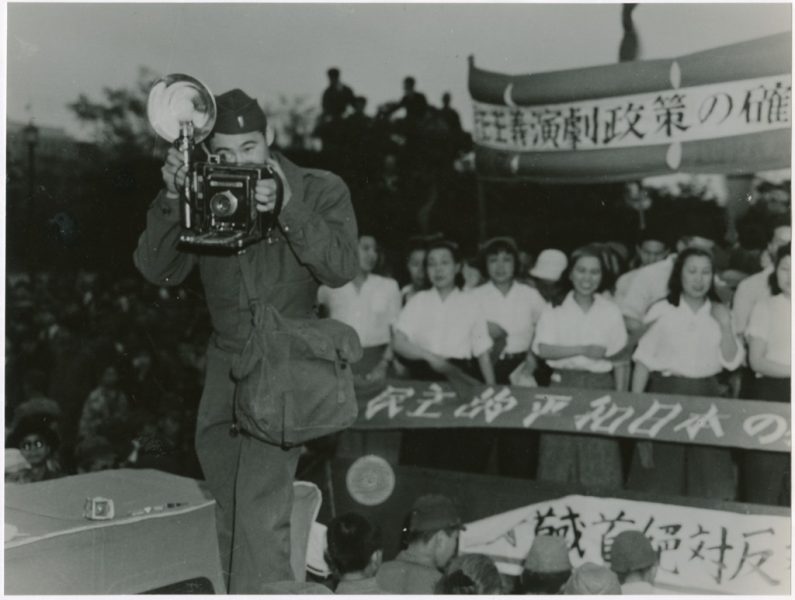 “Ted Akimoto taking a photograph”. Caption: “Our cameras were bulky 4×5 Speed Graphics. Nothing was automatic. You took a wood film holder / which held one piece of film on each side, placed it in the back, pulled out a slide, put in a flashbulb, / figured out your exposure and cocked the shutter, set the f stop, focused and then shot your photo! / After that you put the slide back into the holder, removed the holder, reversed the holder, placed it / back into the camera and removed the slide and put in a fresh flashbulb!” Courtesy of the Theodore Akimoto Family Collection. CC BY-NC-SA 4.0

The Theodore Akimoto Family Collection is hosted by the Densho Digital Repository, which preserves photographs, documents, newspapers, letters and other primary source materials of Japanese Americans incarcerated in the United States following the start of World War II. Theodore Akimoto, an American citizen, was interned with his family before joining the U.S. military and eventually serving in Japan during the occupation.

According to Theodore (Ted) Akimoto in a narrated series of slides, not all of the images in the Theodore Akimoto Family Collection were taken by Akimoto himself but instead come from a variety of military units tasked with documenting the postwar occupation of Japan. All images are licensed under a Creative Commons Attribution-NonCommercial-ShareAlike 4.0 International License. 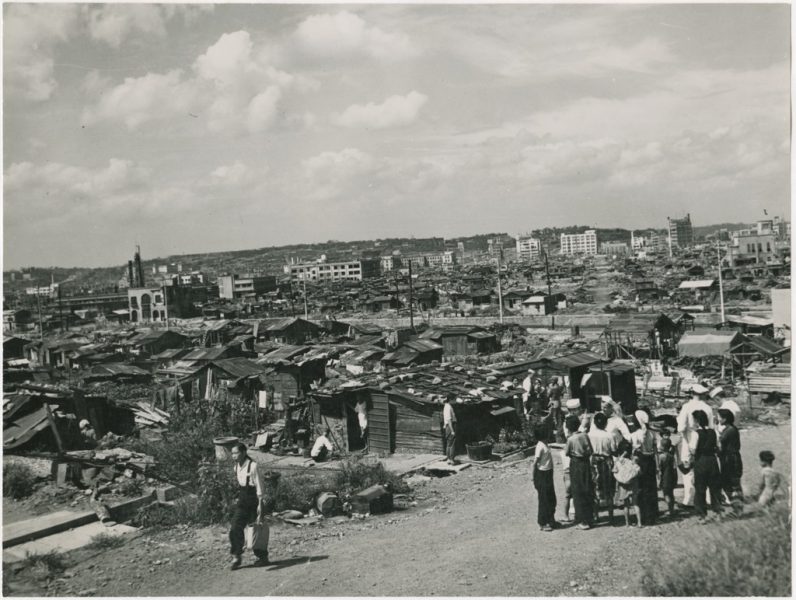 Caption: “The effectiveness of our firebombs is evident everywhere, especially in the / industrial areas where a forest of smokestacks and concrete walls are all that stand.” Courtesy of the Theodore Akimoto Family Collection. CC BY-NC-SA 4.0

At the time of the Japanese attack on Pearl Harbour on December 7, 1941, the Akimoto family lived in Los Angeles, California. According to the 2016 All Things Considered segment broadcast on American National Public Radio (NPR), the three brothers in the family—Victor, Johnny, and Ted Akimoto—attempted to volunteer for military service the next day. Shortly after that, however, the family were removed from their Los Angeles home at gunpoint and, like thousands of other Japanese Americans, would be interned in remote camps, losing all of their possessions.

The three brothers eventually enlisted in the 442nd Regimental Combat Team, a military unit made up entirely of the children of Japanese immigrants who volunteered for service and served in Europe. Victor and Johnny Akimoto would die in Europe, while Ted was sent to Japan after the war as an official photographer for General Douglas MacArthur in Japan. 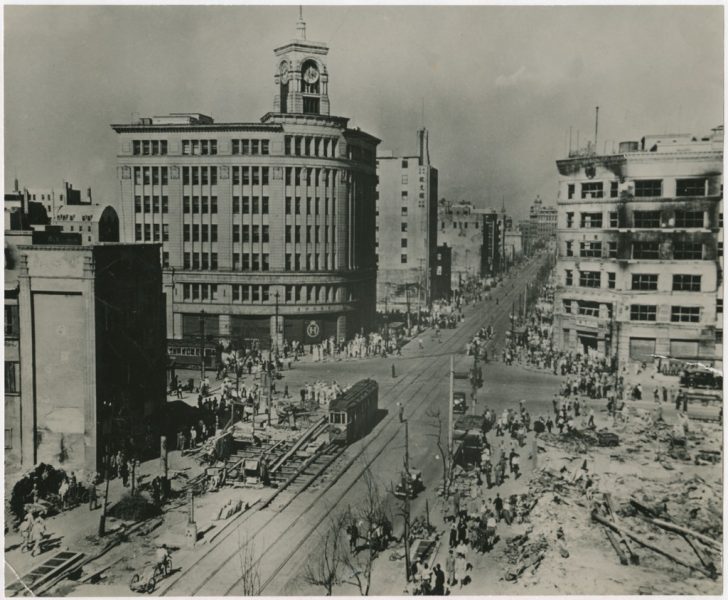 The collection provides some insights about the pace of postwar recovery in Japan. The above photo, taken in 1946, shows Ginza, a once prosperous shopping district in central Tokyo, still largely in ruins, with very rudimentary infrastructure. The image below, taken a year later, shows Ginza largely rebuilt, with more cars, transport trucks, buses and other vehicles on the road. 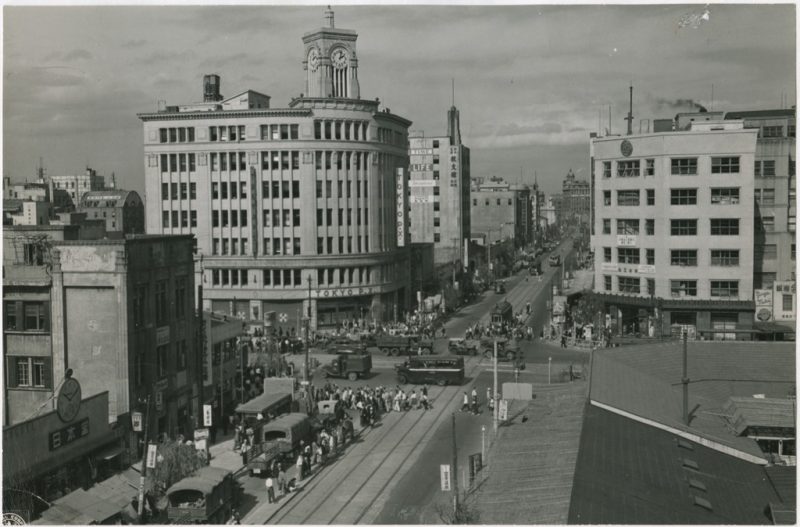 Caption: “The Ginza 1947 / The Ginza in 1946 and a year later. Notice that the corner building has a Tokyo PX sign-in / the 1947 photo. Also the lack of motor traffic except for GI vehicles in 1946.” Courtesy of the Theodore Akimoto Family Collection. CC BY-NC-SA 4.0

The collection also demonstrates how far the country had to yet to go to achieve the prosperity and success that would occur during the postwar boom of the Japanese economic miracle. Rural regions still suffered from the effects of flooding, as the following image demonstrates. 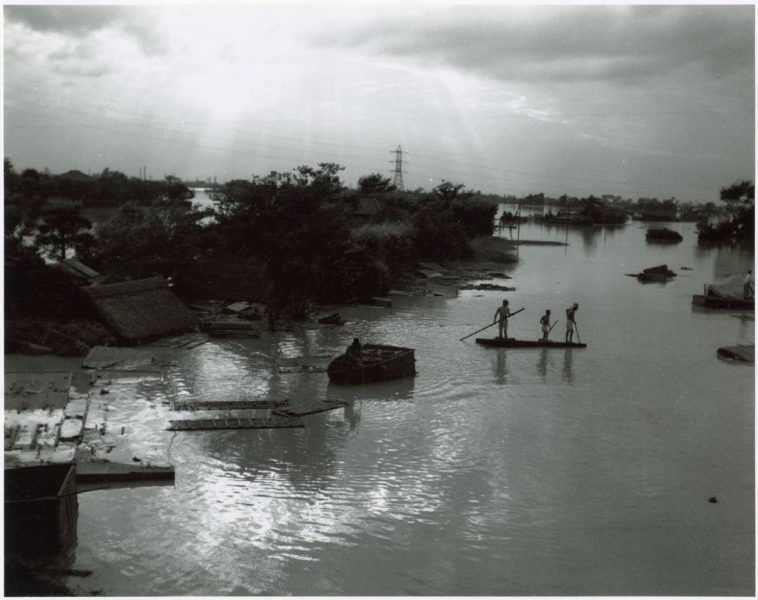 Japanese refugees paddle on a makeshift raft through the flooded village, circa 1945-1947. Courtesy of the Theodore Akimoto Family Collection. CC BY-NC-SA 4.0

While the annihilation of Japanese cities of the wartime years may have ceased in 1945, destruction still continued. In July, 1948, the regional city of Fukui, which had largely been rebuilt after being firebombed to the ground in 1945, was leveled once again by an earthquake. American occupation forces played a key role in providing disaster relief. 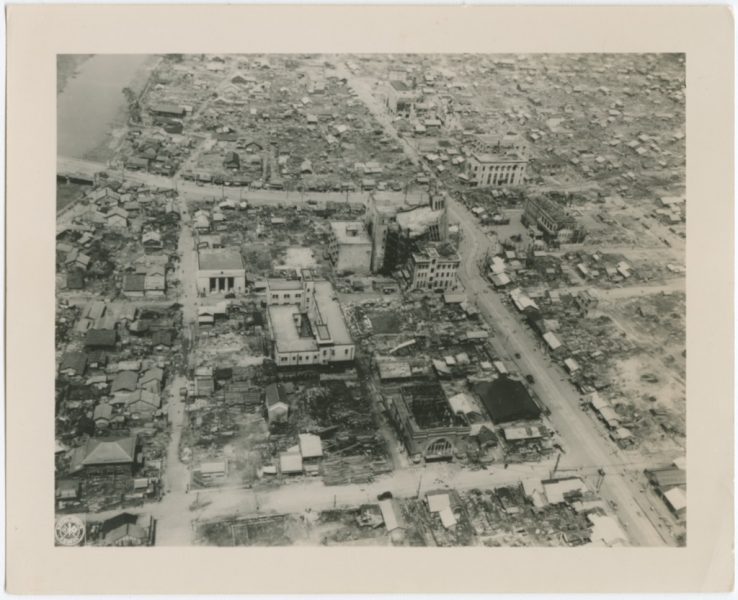 “FEC-48-5331. 28 July 48 / Fukui, one month after earthquake: / One month after the disaster which / came to the southern Japanese / coastal towns, when the earthquake / of 28 June 1948, struck mercilessly / and without warning late in the / afternoon, Fukui already shows / promise of an early reconstruction / period. With experts estimating / that six years will be necessary / to complete this job, the Japanese / have begun to rebuild their homes. / Photographer – Dargis / Photograph by U.S. Army Signal Corps.” Public domain.

The collection also features photographs taken in Korea at the end of the war, as Allied troops liberated the country. 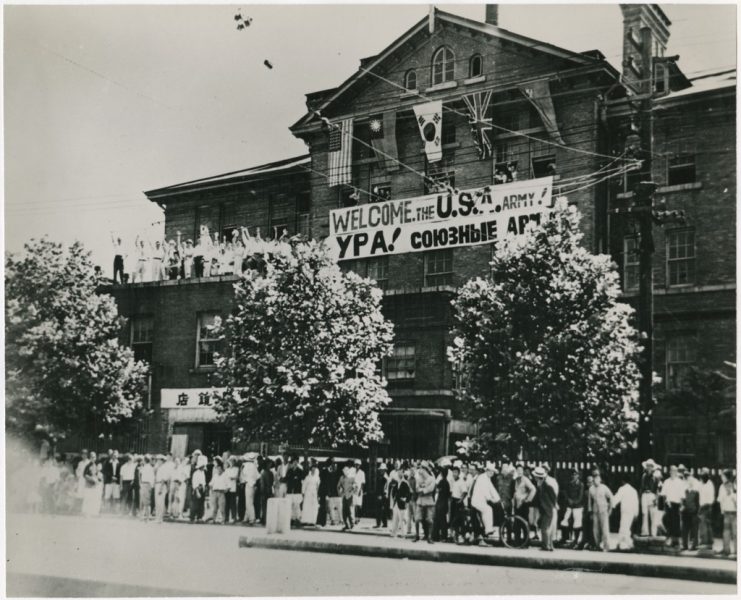 Caption: “In Korea, the populace awaits the arrival of American troops at the end of the war.” Courtesy Theodore Akimoto Family Collection. CC BY-NC-SA 4.0

Ted Akimoto would go on to teach photography and art for 30 years at a high school on a U.S. military base in Germany, and died in 1989. The Theodore Akimoto Family Collection is now preserved online by the Densho Digital Repository. 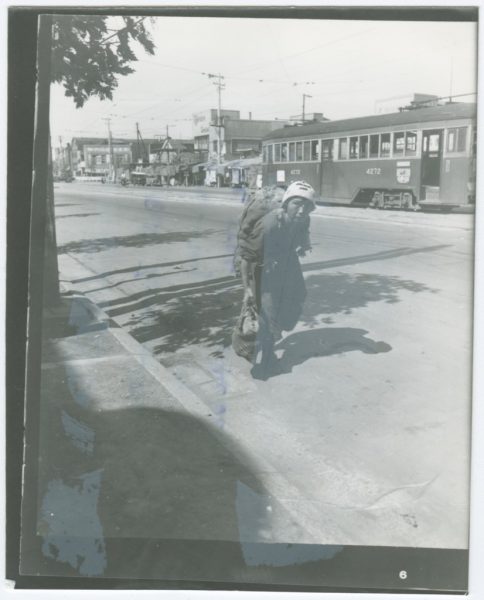