Is Mandarin Chinese the language of East Africa’s future?

China exports language and culture via Confucius Institutes in Africa 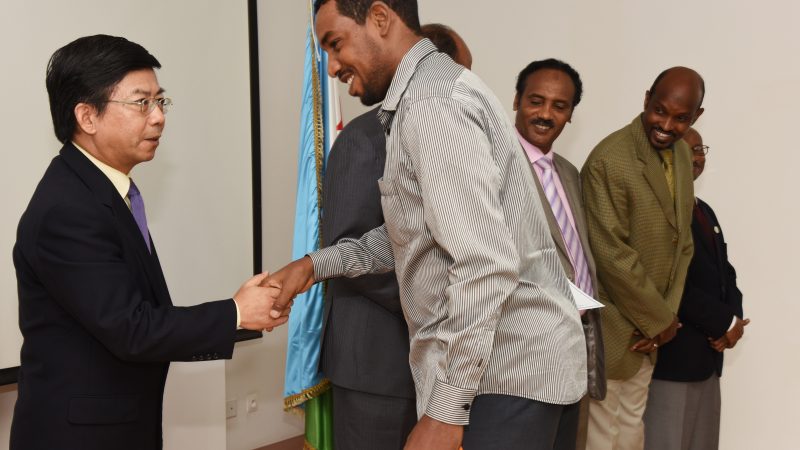 Fu Huaginag, Chinese Ambassador to Djibouti, congratulates a language class student during a graduation ceremony at the Institute of Diplomatic Studies in Djibouti, June 14, 2015. Some of the graduating students spent the last nine months studying Mandarin. Photo by US Air Force Sgt. Maria Bowman/Combined Joint Task Force: Horn of Africa.

The introduction of the Mandarin Chinese language to East African school curricula signals China’s growing influence in Africa as a global superpower.

In January, Kenya’s Curriculum Development Institute announced that in 2020, Mandarin will become part of Kenya’s school curriculum as an optional subject in elementary schools. Kenya is the latest East African nation to follow the Chinese-language trend in schools after Tanzania, Rwanda, Uganda, Zimbabwe and South Africa, among others.

As China strengthens its already robust trade and infrastructural ties with Africa, Chinese-government funded Confucius Institutes (CIs) and Confucius Classrooms (CCs) are on the rise in East Africa. As of 2018, China has established 27 CCs and at least 51 CIs all over Africa.

China has sponsored CIs since 2004 and hundreds have also been established in the United States, Australia, and Canada.

A simple map of all the Confucius Institutes on the African Continent. For interest there are 51 in total; South Africa has 5, while Kenya has 4. Map made using @cmapit Thanks to @xniyi pic.twitter.com/QGWmBuXuVS

Uganda, however, is the only East African country that has added Mandarin as a compulsory subject. Instead of contracting out Chinese teachers, Uganda's Ministry of Education Uganda will offer a 9-month program to train 100 local secondary teachers how to read, speak and write Mandarin at Luyanzi College, who can then teach the language in other secondary school classrooms.

In 2016, Luyanzi became the first secondary school in Uganda to teach Mandarin. Ugandan Ayub Sooma and his Chinese wife of 20 years, Wang Li Hong Sooma, co-own and manage Luyanzi College, a private school. Sooma, who has also served as chairperson of the Uganda-China Friendship Association, believes it is necessary to learn Mandarin in order to enjoy the benefits China has to offer.

Yet, Ugandan-Chinese relations have also been strained due to complaints of ongoing, unfair trade and labor practices.

Tanzanian President John Magufuli announced in May 2019 that Mandarin has been added to the national Certificate of Secondary Education Exams (CSEE) and students will be able to sit a Mandarin language exam. Just like Uganda, local teachers are receiving training to become adept at Mandarin and teach it in secondary schools.

In early July 2019, the Muslim University of Morogoro, in eastern Tanzania, launched a CI Chinese language center. At the inauguration, Ave Maria Semakafu, deputy permanent secretary of the country's Education Ministry, informed the audience that Marangu Teachers College in Kilimanjaro, northern Tanzania, may also offer Mandarin as a major course. Ongoing negotiations between Tanzania and China could lead to a Mandarin program at Marangu Teachers College that will enable teachers to learn Mandarin similar to Swahili and English degree programs, like those offered at the University of Dar es Salaam and the University of Dodoma, who currently offer a Mandarin degree.

Rwanda also recognizes the importance of CIs and CCs in their bilateral relationship with China. Last month, Rwanda hosted the 12th round of “Chinese Bridge,” a Chinese language proficiency competition organized for secondary students. Students from secondary schools throughout Rwanda participated.

China's relationship with East Africa goes back thousands of years and at times, China has also recognized the importance of learning Swahili as part of its ongoing trade and business relationship. In East Africa, 144 million speak Swahili, a Bantu language that originated along the Swahili Coast as a trade language between Arabs and East Africans. The African Union recognizes Swahili as one of several official languages and there's been some discussion about making Swahili the “lingua franca” adopted by other African nations.

During the early 60s, the Communication University of China offered Swahili language classes in solidarity with the socialist vision of Julius Nyerere, the first president of Tanzania, but that ended in 1966 when China went through its own education reforms during the Cultural Revolution. The Shanghai International Studies University (SISU) in eastern China recently introduced a BA degree program in Swahili language studies.

China is not the only nation to promote its language and culture in East Africa: European nations have long done the same through agencies like the Alliance Française, British Council and Goethe-Institut.

For all of the concern about the growth of #China‘s Confucius Institutes in #Africa, their presence is still relatively small compared to the French and the US who have double, almost triple the number of language/culture institutes on the continent, according to @DevReimagined. pic.twitter.com/Jc2jkFc4TM

But CIs affiliate themselves with local schools and tertiary institutions, whereas other nations’ cultural institutes remain independent and separate. Some educators and analysts have criticized CIs as promoters of Chinese propaganda, and note that the Chinese government pumps over $10 billion annually into CIs to improve China’s “soft power” abroad.

Educators have also sounded the alarm about CIs omission of conversations on human rights, repression of critical inquiry and promotion of political propaganda. Some US officials have raised the possibility that they might even threaten national security. The US recently passed regulations requiring CIs based at US institutions to register as “foreign agents” and forcing universities to choose between funding from the US Pentagon or CI for Mandarin language courses.

Confucius Institutes… spread propaganda and sometimes manage to squelch discussion of topics embarrassing to China, such as the conquest of Tibet and the camps in Xinjiang Province, https://t.co/3apiQYiCd2

As a result of these concerns, some students have been pulled out of CI and CC programs in Australia and Canada. Sweden and Germany have also shut down several CIs as a result of recent controversies over their intention and agenda.

So far, however, East African authorities have not expressed worry over the influence of CIs and CCs, or concern with how Mandarin might affect Swahili or other indigenous languages.

Still, netizens have expressed their concern about the nature of CIs in Africa:

This is a great piece:
Much ink has been spilled on the effects of China’s engagement with Africa on the economic front, but little has been said about its cultural diplomacy — and the Confucius Institutes that are at the forefront of this: https://t.co/4Ot8ekzf11

Chambi Chachage wonders whether Mandarin may replace Swahili as a national language:

@ShangweliBeria Is Chinese taking over from Kiswahili as one of the two official languages in Tanzania? #Daressalaam pic.twitter.com/BWIYsqspJm