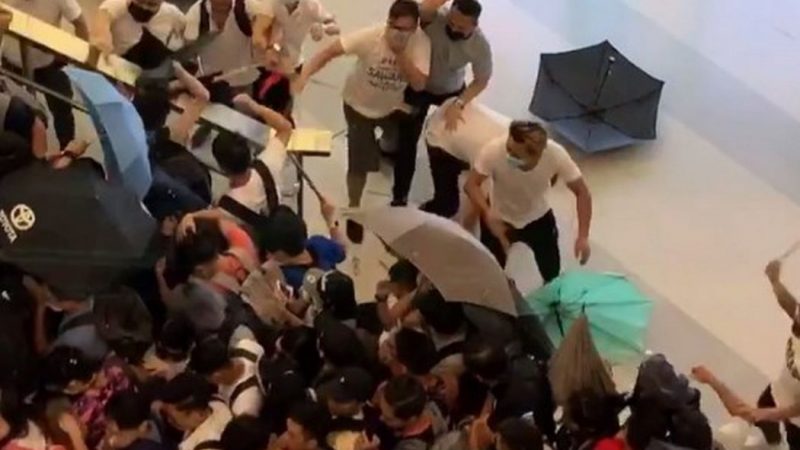 On 21 July, hundreds of people gathered outside a suburban Hong Kong subway station and attacked anti-extradition protesters and commuters with metal rods and wooden sticks — causing at least 45 injuries.

At around 5 to 6 p.m., a mob dressed in white started to gather outside the Yuen Long subway station carrying metal rods and wooden sticks.

As protesters returned home after an anti-extradition rally attended by 430,000 people, the mob stormed into the subway station and began attacking protesters who were not wearing white-colored outfits (protesters from the rally mainly wore black).

A video published on Twitter by Hong Kong Free Press shows people in white assaulting protesters and commuters. Another video posted by Jun Pang shows the mob randomly and violently beating up an individual. The mob even entered a train car and screams can be heard as they attacked passengers, as shown in Denise Ho's video on Twitter. Some netizens believe the mob attacks were perpetrated by members of an organized crime syndicate called the triad who run their operations out of the Yuen Long area of Hong Kong:

How long #HKSAR government & @hkpoliceforce can go to tolerate these triad members? Have they got a non-objection notice of gathering? pic.twitter.com/RzqoN4CJHZ

Pro-Beijing lawmaker Junius Ho was spotted shaking hands and giving a thumbs up to some members of the mob:

“All of you are my heroes”: Pro-Beijing lawmaker Junius Ho appears to applaud, give a “thumbs up” & shake hands with men in white. https://t.co/9xSgQ38X8i It came as 100s of masked men in white shirts assaulted anti-extradition protesters & MTR passengers in Yuen Long. pic.twitter.com/ZTAv9XWzvB

So far, no arrests have been made and the public has cast blame on the police for failing to quickly respond to distress calls. On social media, netizens claimed that they had filed reports to the police that went unanswered. At 11:00 p.m., the subway station authorities announced that West Rail Line trains would not stop at Yuen Long because of the gathering crowds. Train services resumed at 11:25 p.m. and riot police arrived at 11:30 p.m.:

Police officers again came under fire as Yuen Long questioned where they were when the thugs attacked citizens in the MTR station earlier. “You are supposed to protect us. Where have you been?” #antiELAB pic.twitter.com/POGCpztlmh

The government issued a statement condemning both anti-extradition protesters on Hong Kong island and the Yuen Long mobs for causing the violent scenes. The police in charge said that the violence was a conflict between two political groups.

JUST IN: @hkpoliceforce briefing on #YuenLong attacks.
Q: Why did the men in white attack people?
A: I believe people had different political views and disputes, while left to physical clashes
Q: How will you follow up on the assailants? pic.twitter.com/cbhU7e5lET

At least 45 people were hospitalized and one was left in critical condition as a result of the mob attack. Among the injured is pro-democracy lawmaker Lam Cheuk Ting, 2 journalists from Stand News and Now TV and a pregnant woman. 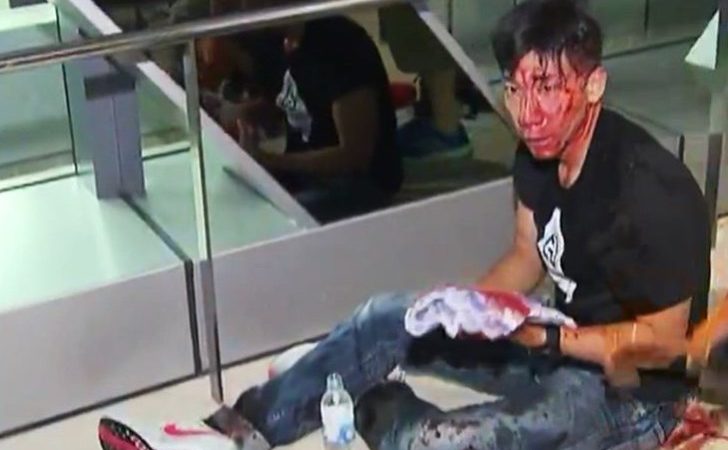 Former journalist Ryan Lau was also attacked and received stitches on his head. He wrote down what had happened on Facebook:

Yesterday I did not attend the rally and was playing with my kids at home. In the evening I saw the live-streaming in Yuen Long and decided to go there and see if I can help out.
When watching Yuen Long residents being attacked without any help from authorities, as a Hongkonger, I just wanted to help them to leave the scene. I arrived and drove three young people back home. I was attacked when I returned.
At the time, I urged people to leave, then I saw a person was attacked by a group of people, I went up to pull him away. But I was not strong and was beaten up by 4-5 people with metal rods. I had never seen so much blood coming out from wounds in my life. I didn't know how long I was beaten before someone came up to stop them. Anyway, I should thank him.
Such a long night, I have to thank all the friends who are worrying about my condition. I could not answer you all. The most frequent message was “be careful, you have kids and old people to look after at home”. But actually because of the kids and the elderly, we have to be brave and protect them. Shouldn't it be like that?