Philippine vice president and other Duterte critics charged with sedition 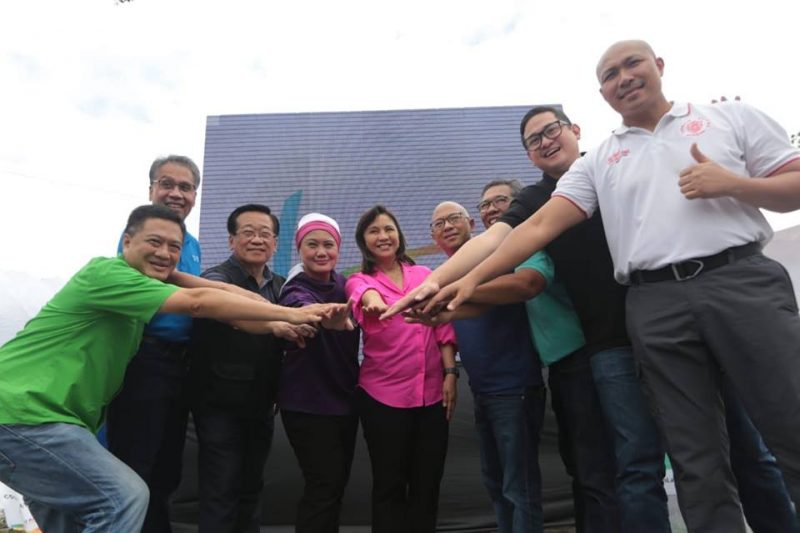 Senatorial candidates of the opposition coalition together with Vice President Leni Robredo (center, wearing purple) during the campaign period last April 2019. Except for former Senator Mar Roxas (second from left, wearing blue), all the individuals in this photo have been charged with sedition by the Philippine police. Photo from the Facebook page of Otso Diretso.

The Philippine police have filed sedition and other charges against Vice President Leni Robredo and 35 other individuals, in connection with the release of an online video accusing the family of President Rodrigo Duterte of having connections to illegal drug operations. This move is seen by many as another attempt by the government to muzzle dissenting voices.

The charges filed by the Philippine National Police-Criminal Investigation and Detection Group (PNP-CIDG) are sedition, cyber libel, libel, estafa, harboring a criminal and obstruction of justice. The prominent indviduals named along with Robredo include two incumbent opposition senators, two former senators, and four high-ranking Catholic bishops. Robredo is a member of the political opposition.

All of the accused had consistently expressed concern about the human rights abuses committed by state forces in enforcing Duterte’s notorious ‘war on drugs’.

Thousands have been killed by police during drug bust operations since Duterte assumed the presidency in 2016. Human rights groups say the number of killings has already reached more than 20,000, but the police insist that the number of fatalities ranges from 4,000 to 6,000. A resolution adopted by the United Nations Human Rights Council on July 11, 2019 calls for an official UN probe into the extent of the drug-related deaths and other cases of extrajudicial killings in the Philippines.

The case against Robredo et al. stems from the airing of a six-part online video series in April 2019 in which Duterte’s family is accused of being involved with criminal drug syndicates.

The whistleblower in the video, ‘Bikoy’, later came out and identified himself as Peter Joemel Advincula. The police accused him of lacking credibility.

After going missing for several days, Bikoy appeared in a press conference with the police and claimed that the video series was part of a destabilization plot against the Duterte government. He said Robredo and other opposition leaders were involved with producing the video and were conspiring to discredit and unseat Duterte.

Robredo and the other accused didn’t appear in the videos, not did they publicly endorse the series.

Robredo's office said the police's case “is completely baseless and nothing more than plain and simple harassment.”

Senator Leila de Lima, one of the accused, called the police probe “pure hogwash.” Other opposition leaders speculated that the case was filed just days before Duterte's fourth state of the nation address to divert the people’s attention from other pressing issues, such as the continuing drug-related killings, human rights abuses in the countryside, rising unemployment, and Duterte’s inaction over China’s military buildup in the West Philippine Sea (South China Sea).

Bishop Pablo Virgilio David, also one of the accused, told the media that the action by the police is designed is to intimidate  critics of the government:

The intention is obvious: pure harassment and an effort on the part of the PNP [police] to do, not their sworn duty, but what they think will be pleasing to the higher authorities.

In a carefully-worded statement, Davao Archbishop Romulo Valles, who is also head of the influential Catholic Bishops’ Conference of the Philippines, vouched for the integrity of the bishops accused of being part of the sedition plot:

They may be perceived as very vocal and very critical in their pronouncements. But that they consciously worked promoting seditious activities and other related crimes, these honestly I cannot believe. These are individuals whose love for country and dedication for the welfare of our people I cannot doubt.

The Free Legal Assistance Group issued a statement defending the human rights lawyers who were named on the charge sheet:

The charges are not only baseless, they are meant to silence and persecute human rights lawyers, opposition leaders, and the church, and to send a message to anyone who dares to criticize this administration.

The charges filed by the CIDG are designed to intimidate, harass and interfere with our lawyers, who are just doing their jobs as human rights defenders.

In the past three years, critics who have faced criminal prosecution include journalists, opposition politicians, activists, and religious missionaries.

Justice Secretary Menardo Guevarra said his office would observe due process and conduct a preliminary investigation based on the complaint submitted by the police.

I have said this before and I will say it again. The DOJ [Department of Justice] is not a weapon for oppression or persecution. We shall go only by the evidence presented before us and we don't care who gets indicted and who goes scot-free.

Duterte’s spokesperson said the president’s office played no role in the case filed by the police.