The organization and future of the Hong Kong anti-extradition protests 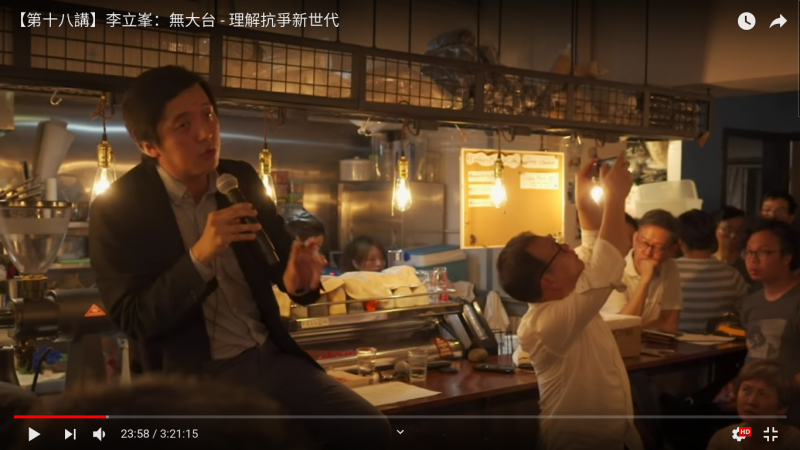 In the wake of the 2019 anti-extradition protests that swept Hong Kong, local cafe Brew Note hosted a public salon to discuss the new generation of protesters on the island. The guest speaker was Professor Francis Li, director of the School of Journalism and Communication at the Chinese University of Hong Kong, who shared insights into how protesters were able to organize on such a large scale and discussed the future of the movement.

The series of protests began in March 2019 in response to the Hong Kong government's attempt to amend the Fugitive Offenders and Mutual Legal Assistance in Criminal Matters Legislation. If it had passed, the proposed bill would have empowered the Chief Executive and the local courts to handle case-by-case extradition requests from territories with no prior agreements, including Taiwan and China. Massive mobilizations on June 9 and 16 were successful in suspending the bill from being discussed by the Legislative Council. However, protesters were outraged by the police crackdown of the June 12 protests and demanded that the government investigate police misconduct and that Chief Executive Carrie Lam resign.

The anti-extradition campaign, which saw more than 2 million people take to the streets on June 16 alone, has shocked everyone in Hong Kong. The scale of the response has led many to ask how the protests were organized and how they were able to mobilize the largest protests in Hong Kong's history. Professor Francis Li's observations shed some light on these questions. Below is a summary of Li's presentation:

Open source organization of the protests

While many people thought that the anti-extradition protest was a leaderless campaign, Li clarifies that a central organizing body was initially involved to help coordinate them. The anti-extradition campaign was kickstarted with a rally on April 28 hosted by the Civic Human Rights Front (CHRF), a local NGO coalition. The massive rallies on June 9 and June 16 were also hosted by CHRF as the law requires that all demonstrations have a police permit. Moreover, the coalition has strong connections with the pan-democratic sector and Li adds that a majority of its supporters are political liberals and moderates.

In addition to a central organizing platform, Li highlights the many other periphery protests and actions mobilized online through the LIHKG forum and Telegram mobile message channels. He was also quick to note that these spontaneous networks were not associated with the CHRF and the members of these platforms were not following instructions from the CHRF or any other pan-democrat lawmakers. During the campaign, the public figures acted like facilitators by providing assistance to the already protesting crowds. Li states that if a public figure attempted to make a speech or give instructions in any way during the protests, the crowds would boo at them. They didn’t want to be led.

On the LIHKG forum and Telegram open groups, popular comments, and suggestions were pushed to the top. The protesters would use the platform for brainstorming protest ideas, and someone would pick up the most popular ones and form a team to follow up and draw a plan.

Li compared this method to a kind of open source technology organization where someone proposes a central code and another person easily picks it up afterward to develop their own products. A decentralized organization model like this is considered more creative and effective. It encourages participation and the cost of failure is minimized as many teams are in operation and one or two failures would not affect the whole production line.

For Li, new communication platforms such as LIHKG and Telegram facilitate this type of decentralized organization. Telegram allows for public channels with tens of thousands of subscribers while LIHKG’s Reddit-like crowd ranking function allows people to know opinions are the most popular.

Below is an initial survey on the demographics of the anti-extradition protesters conducted by a multi-university research team that Li belongs to:

A majority of the young people who participated in the protests only started paying attention to the anti-extradition issue around the end of May after students and alumni from hundreds of secondary schools signed a joint campaign.

According to the survey done on June 21, among the young protesters, 86-89 percent found telegram to be an important communication channel for organizing.

On the question of whether or not they agreed with the view that radical protests would cause a negative social reaction, the research team found that 62.2 percent aged 20 or younger agreed, 54.8 percent between the ages 21 to 25 agreed, and 53.3 percent between 26 to 30 agreed.

The future of the anti-extradition protests

According to Li, the decentralized organizational model works well for single-issue defensive campaigns but it might not necessarily be the best long-term approach. After the government redraws the bill and the campaign puts forward a list of new demands, without a centralized organizing body, it would be difficult to negotiate with the government as no one can represent the campaign.

There are different types of social movements, one is an issue-based campaign, like the 2014 Umbrella protests and the anti-extradition protests. These can lead to long-term movements like those seen after the July 2003 rally, when a large number of online independent media outlets emerged. Similar developments were observed after the 2014 massive democracy protests when some protesters formed activist groups advocating for “localism” and some started community-building work on a grassroots level.

According to Li, how the anti-extradition protesters find their own position in the movement is still an open question.