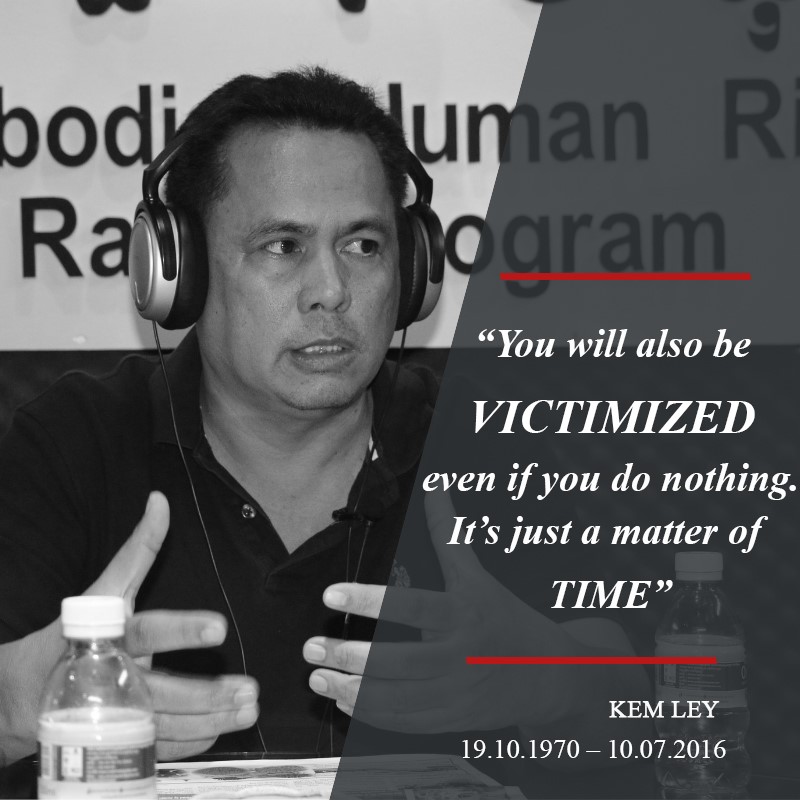 An activist selling t-shirts with this printed quote of Kem Ley was arrested by the police for ‘inciting to commit a felony’. Photo from the Facebook page of Cambodian Center for Human Rights

Sopheap Chak of the Cambodian Center for Human Rights described the work of Kem Ley prior to his death:

Kem Ley is most commonly described as a political analyst. Though accurate, this description feels insufficient to capture the work he did, the people he engaged, the bravery he showed, and the message he sent to Cambodians everywhere. Kem Ley was unshaking in his commitment to the truth. He did not let fear or bias sway him, and criticized both the main parties at time, when he felt it was merited.

Kem Ley was killed in a gas station on 10 July 2016 which many continue to suspect was linked to his work as a radio commentator, political analyst, and leader of the Grassroots Democracy Party (GDP).

The police arrested a suspect who immediately confessed that he killed Kem Ley because the latter owed him money. But a study done by the International Commission of Jurists revealed that there were significant gaps in the investigation, trial, and conviction and urged the government to establish an independent probe under the auspices of the United Nations.

Civil society organizations (CSOs) continue to demand truth and justice three years after the killing of Kem Ley. A joint statement signed by more than 20 local and international CSOs highlights the importance of resolving the Kem Ley killing, and to address the culture of impunity under the government of Prime Minister Hun Sen who has ruled the country over the past three decades. An excerpt of the statement reads:

Kem Ley’s killing remains an alarming reminder of Cambodia’s culture of impunity in cases of apparent enforced disappearances, killings and other forms of physical and legal harassment of human rights defenders, labour leaders, monks, journalists, members of the political opposition and other individuals critical of the ruling regime. Kem Ley’s death also occurred in the midst of a crackdown on dissent, and rising restrictions on independent and critical media.

The statement refers to the crackdown of dissenting voices in Cambodia. In 2018, an election was held without an opposition party because it was dissolved by the Court after the ruling party accused it of conspiring with foreign powers to bring down the Hun Sen government. Several independent media outlets were also slapped with charges linked to tax and licensing violations which forced their closure ahead of the elections.

The police prevented groups from holding activities across Cambodia that sought to commemorate the third anniversary of Kem Ley's death.

In the capital city of Phnom Penh, activists Kong Raiya and Soung Neakpaon were arrested under the charge of “incitement to commit a felony” which carries a potential prison sentence of six months to two years. Raiya was arrested for encouraging people to join activities in honor of Kem Ley and for selling t-shirts with this printed message: “You will also be VICTIMIZED even if you do nothing. It’s just a matter of TIME”. This was one of the quotes attributed to Kem Ley.

In a media interview, the police explained why the message on the t-shirts was deemed a threat:

It implies that authorities organized a plan to kill people. This is damaging. It causes chaos and instability in society.

Meanwhile, Soung was arrested for joining a crowd outside the gas station where Kem Ley was killed. He was holding a placard urging an end to extrajudicial killings.

There were several other activists who were also arrested but they were eventually released and only Raiya and Soung were charged by authorities.

Three youths are arrested when they tried to bring flowers and photo of Dr. Kem Ley in order to dedicate to his soul at Caltex mart where he was gunned down 3 years ago #KemLey #Justice4KemLey #RightsKh #PoliticsKH pic.twitter.com/NWkuSBe4bO

Some CSO leaders managed to get inside the convenience store of the gas station where they carried flowers in memory of Kem Ley. The police confiscated the flowers and ordered individuals to remove t-shirts with the image of Kem Ley. Here's a report from the Center for Alliance of Labor and Human Rights:

Attendees were disallowed from wearing t-shirts with Dr Kem Ley’s face, with one representative, Tem Malai, forced to take the shirt off by authorities. Whilst CSOs were inside preparing coffee and jasmine flowers, authorities entered the Caltex Mart and seized the flowers to prevent any commemoration of his death. A Boeung Kak land activist was prevented from entering the Caltex Mart at all and upon arriving at the location was ushered away by the authorities.

Once again, July 10th, I come to a coffee shop with 2 glasses of coffee, one for myself and one for our dearest late Dr. Kem Ley who was gunned down (today) three years ago. I noticed heavy presence of security forces, one of whom came to my table and took away the flowers. pic.twitter.com/QT7qiPRw5h

Members of the GDP were also prevented by the police from leaving their office to join the crowd outside the gas station.

JUST IN: Members of #GDP disrupted from leaving its office in #PhnomPenh as they are on their departure for #KemLey‘s three-year anniversary. #Cambodia (Photo: Supplied) pic.twitter.com/ssquVlBdL3

More than 80 groups signed a statement condemning the arrest of individuals who were honoring Kem Ley:

(The) arrest and charges mark yet another low point in the government’s crackdown on free speech and peaceful assembly in Cambodia.

The accusation that a peaceful gathering merits a prison sentence is a serious and systematic threat to the little remaining space left for freedom of expression in the country.

In response, the government said the opposition and CSOs should stop ‘politicizing’ the death anniversary of Kem Ley.