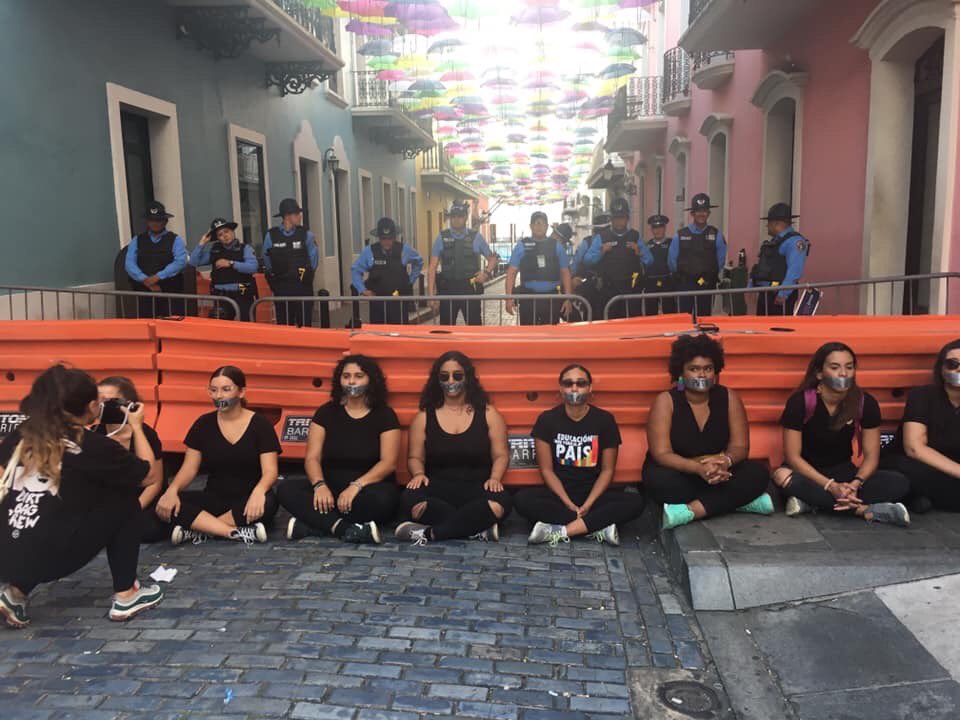 Feminist groups protesting in front of La Fortaleza, the governor's mansion, in San Juan, Puerto Rico, on July 12, 2019. Image shared on social media by the Twitter account of @TodasPR, a project created by women journalists that aims to make women's voices and stories visible in journalism.

Puerto Rico Governor Ricardo Rosselló is being asked to resign after the high-profile arrest of several individuals linked to numerous corruption cases. A leaked Telegram chat also revealed how the governor and some of his Cabinet members used profane language to ridicule the opposition.

The arrests were carried out by the Federal Bureau of Investigation (FBI), as part of a probe that uncovered a widespread scheme — involving several agencies — to bypass regular bidding processes for government contracts. The charges in the FBI's indictment included money laundering, theft, wire fraud, money laundering conspiracy and wire fraud conspiracy.

Journalist Andrew Scurria (@AndrewScurria) quoted part of the indictment that describes the scheme:

“Members of the conspiracy and scheme failed to disclose that portions of the funds assigned under the contracts would be paid as commissions by the contractors to individuals with gov't influence in exchange for obtaining the gov't contract.”

Page 16 of the indictment further states: “By paying unauthorized commissions, the cost of government contracts was unnecessarily inflated and increased.”

In a Twitter thread, cultural anthropologist and essayist Rima Brusi offered a synthesis of the events leading to this latest government scandal :

This morning, the FBI arrested #JuliaKeleher, Puerto Rico’s ex-secretary of education. This is the latest chapter of a saga that showcases how greed, #disasterprofiteering and #colonialism operate together in #PuertoRico. See this thread for a summary. (1/8)

Some of these transactions occurred during the weeks immediately following Hurricane Maria, in September 2017. During this time, many Puerto Ricans had no access to basic medical services, food or potable water. Most of the country was without electricity. Hurricane-related deaths were later estimated to be as high as 4,645 people.

The day before the arrests, pages from a Telegram chat — which included the governor, several members of his cabinet and individuals who were neither employees nor contractors, yet misrepresented themselves as such to other agencies — were leaked to the public.

In the chat, the governor and his team used profane, sexist, misogynist, homophobic and body-shaming language to refer not only to members of the political opposition, but also to members of feminist groups and the Puerto Rican press. American politicians and even high-ranking members of the governor's own New Progressive Party were also the object of derision.

In one instance, Chief Financial Officer Christian Sobrino (who resigned on July 13) made a cruel joke about the accumulation of corpses at the Institute of Forensic Sciences (IFS):

While people worried about missing loved ones in the aftermath of #HurricaneMaria, Gov. @ricardorossello’s close advisor joked about dead bodies. “Any spare bodies we can feed our crows? They need some attention.” #RickyLeaks https://t.co/gfgHElDVW9

The lack of forensic experts is a serious problem which has paralyzed thousands of criminal investigations in Puerto Rico because of inadequate funding of the IFS and has only worsened after Hurricane Maria. It currently takes several months for examination to take place.

On July 13, the Centro de Periodismo Investigativo (Center for Investigative Journalism) made the entire 889-page document available on their website.

Twitter users created the hashtags #Telegramgate and #RickyLeaks to accompany their comments. Julio Ricardo Varela, founder of Latino Rebels, pointed out what he saw as a recurring problem with Puerto Rico's political class:

I understand the need for private convo that is based on trust, but at the same time #TelegramGate exposes a deep truth about #PuertoRico: The arrogant, white male Puerto Rican political class. It's been a thing for decades. That they are entitled. That they are better.

At a July 11 press conference, Governor Rosselló asked for forgiveness for the Telegram chat. Journalist Ana Teresa Toro noted that something was glaringly absent from the governor's apology:

Where is the commitment to transcend the prejudices that lead to these types of remarks? Asking for forgiveness without a commitment to evolve, without concrete changes, is not enough.

The apology is because he was exposed, not because he laments the poverty of his character. And that's all that is needed to know about his views on corruption.

Calls for the governor to go

The double shock of the Telegram revelations and the FBI's corruption probe prompted many to call for Governor Rosselló's resignation. That night, protesters gathered outside La Fortaleza, the governor's mansion in San Juan, demanding that he step down.

Protest in front of Fortaleza against government corruption.

United States Congressman Raúl Grijalva, the Chair of the Natural Resources Committee of the House of Representatives (which oversees Puerto Rico), also called for Governor Rosselló's resignation, a move which some found probelamtic and hypocritical:

Why don't you impeach your own criminal president first?

As self appointed rulers of #PuertoRico you @NRDems have no moral authority because u are complicit in an ongoing crime: #colonialism https://t.co/z9Lum26Suf

In the midst of the controversy, Puerto Rico's institutions have been heavily criticized for failing to act. Responding to Secretary of Justice Wanda Vázquez's apparent intention to not examine the Telegram document to determine whether any laws broken — but instead dismiss the matter as a regrettable incident — journalist Benjamín Torres Gotay (who was derided in the Telegram chat), tweeted:

Never in the life of the Department of Justice has an 889-page document been analyzed so quickly to come to the conclusion that ‘to err is human.’

The Procurator of Women, Lersy Boria, also came under fire from several feminist groups for refusing to assume a clear position that condemns the character of the people involved in the Telegram chat — and the language they used:

Sexist, homophobic and lesbophobic remarks against women activists, journalists and government officials. Persecution of those of us who dissent and demand that they work to improve our quality of life. Procurer, @LersyBoria, demand @ricardorossello‘s resignation now!

As of this writing, it is heavily rumored that Governor Rosselló could announce his resignation at any moment.