Jamaican women tackle the climate crisis on all sides 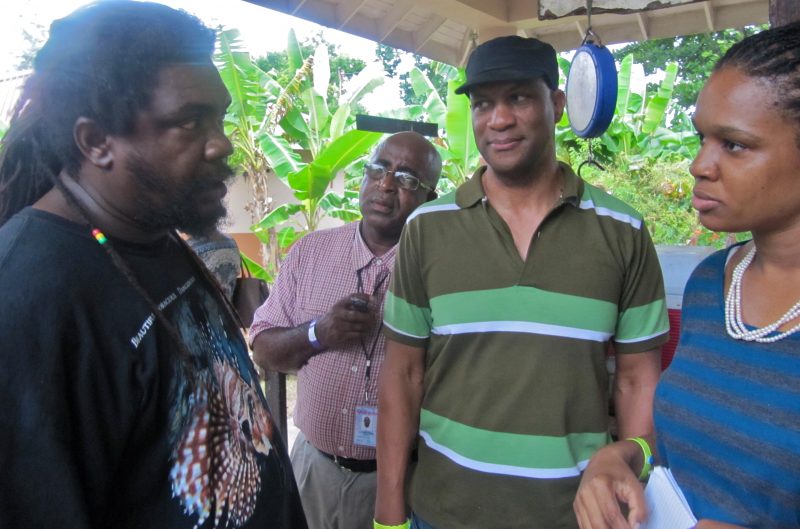 This post has been adapted from a presentation by Global Voices contributor Emma Lewis, who took part in the first of a series of events headlined “She Speaks”, in Kingston, Jamaica, June 18, 2019.

Globally, startling changes in the environment disproportionately affect women in developing countries, largely because of their lower economic and social status. In Jamaica, women head about 46 percent of households and bear the brunt of responsibility for shelter, water, and food security.

International agencies have caught on to the need for women's involvement in the climate crisis quite late with gender-sensitive policies and action plans.

In September 2018, Una May Gordan, principal director of the Jamaican government's Climate Change Division, brought together a group of regional gender specialists and climate experts for a workshop with the United Nations Entity for Gender Equality and the Empowerment of Women (UN Women) in Kingston.

Now, a growing number of Jamaican women — internationally, regionally and locally — are contributing to the fight against climate change. 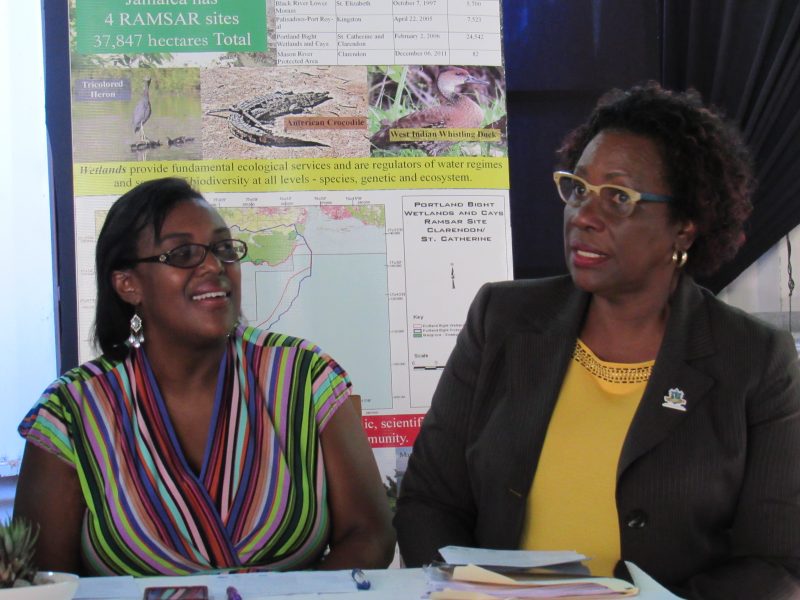 Ingrid Parchment, executive director of the Caribbean Coastal Area Management Foundation (C-CAM) (left), chats with Una May Gordon of the Climate Change Division, at the signing of a grant agreement at C-CAM's field station in Salt River, Clarendon, Jamaica. Photo by Emma Lewis, used with permission.

After Senator Kamina Johnson Smith signed the historic Paris agreement on behalf of Jamaica at the UN conference on climate change on Earth Day, April 22, 2016, much of the hard slog associated with UN negotiations fell on the shoulders of Una May Gordon. Focusing on long-term goals, she obtained sustained financing for Jamaica's climate change efforts, supporting the efforts of the Alliance of Small Island States to advocate for a limit to global emissions to not more than 1.5 degrees above pre-industrial levels. This was a critical part of the historic UN Climate Change Conference in Paris, following which the Caribbean launched a major campaign, spearheaded by St. Lucia and Jamaica, called “1.5 to Stay Alive”. Gordon also conducts regular forums on climate change-related topics and spearheads the government's public education efforts around the climate crisis. 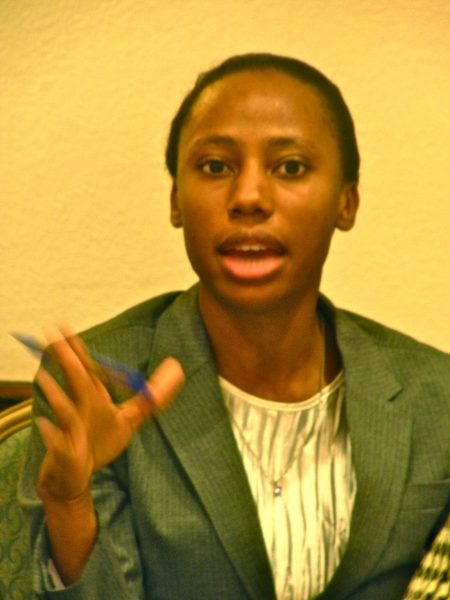 At the UN, Jamaica and fifteen other Caribbean islands work under the umbrella of the Alliance of Small Island States (AOSIS) to make sure the region is meeting crucial climate targets. Le-Anne Roper is chief technical director for adaptation, which is a critical area of concern for Small Island Developing States (SIDS). Small nations, like those that make up the Caribbean archipelago, are largely not responsible for the emission levels produced by developed countries, yet the burden is on them to adapt to the impact of the climate crisis, which is already impacting their economies more acutely. They do this largely through finding funding for community-based projects like the Kingston-based Pilot Program for Climate Resilience, which benefits six Caribbean islands, including Jamaica.

Jamaica's Minister for Science, Energy and Technology, Fayval Williams — the first woman to hold this post — also has a critical role to play. In October 2018, the government announced that the country would increase its very modest target of 30 per cent renewables to 50 per cent by 2030. Since then, Minister Williams, who has a strong background in finance, championed the highly successful Initial Public Offering (IPO) for Wigton Windfarm. In an innovative move, the shares were offered to ordinary Jamaicans for $1,000 JMD (about $7.50 USD) each. Nearly 12,000 new, mostly young investors (about 38 per cent of total subscribers) obtained shares for the largest wind facility in the English-speaking Caribbean.

Forests and mangroves, critical to stemming the rate of climate change, remains a central issue to forest conservationist Marilyn Headley, who is working toward preparing Jamaica for the Reducing Emissions from Deforestation and Forest Degradation (REDD+) programme, aimed at cutting down forest carbon emissions by awarding carbon credits. As the first female and longest-serving Conservator of Forests, Headley was instrumental in crafting the country's National Forest Management and Conservation Plan for the next ten years. 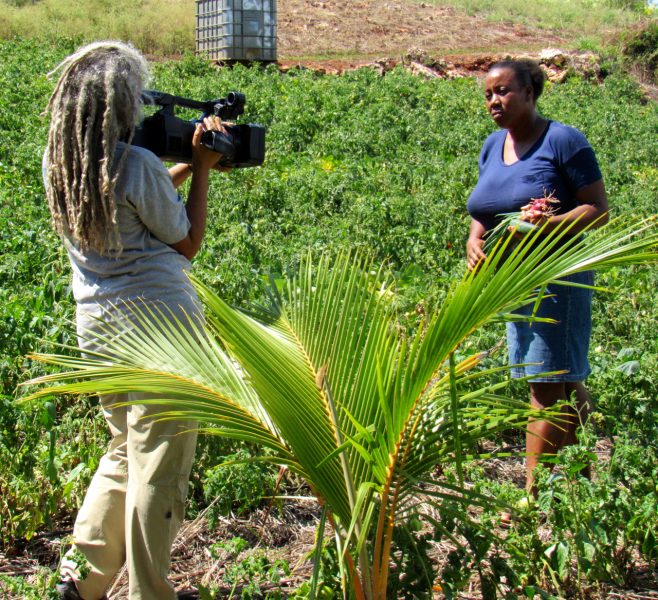 Environmental filmmaker Esther Figueroa records an interview with a farmer in a field in rural St. Elizabeth, Jamaica. Photo by Emma Lewis, used with permission.

Following in these women’s footsteps is a veritable army of women scientists, artists, community-based organisers, civil society activists, youth leaders, advocates and journalists, all supporting Jamaica’s efforts to combat climate change from various angles — including researching its effects on agriculture and gender. 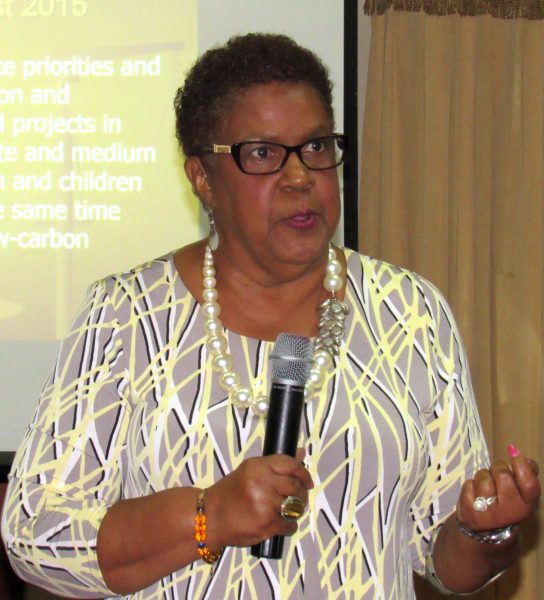 Eleanor Jones, for instance, is the founder and managing director of Environmental Solutions Limited. A leading light in the Jamaica Institute of Environmental Professionals, she has one foot firmly planted in the private sector and the other in community-based climate resilience and disaster risk management — a key area for the Caribbean in the face of increasingly violent storms, floods and drought. As Chair of the Private Sector Organisation of Jamaica's Energy, Environment and Climate Change Committee, Jones promotes business opportunities in energy and environmental management for members and contributes to building national and regional environmental and energy policies and legislative frameworks.

On Jamaica's vulnerable south coast, which is more regularly affected by storms and is susceptible to flooding from rising sea levels — as well as prolonged drought at times — Ingrid Parchment heads the nongovernmental Caribbean Coastal Area Management Foundation. The organization facilitates climate change adaptation programs all along this sensitive area. 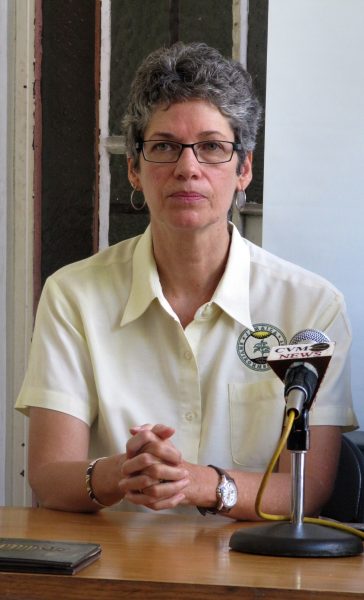 Similarly, the Jamaica Environment Trust (JET), a nongovernmental organisation founded by environmental advocate and author Diana McCaulay and now led by Suzanne Stanley, has an ongoing campaign to Save Cockpit Country — an ecologically critical area that is under threat from bauxite mining. This type of mining makes by far the largest contribution to Jamaica’s emissions, including around two million tonnes of carbon dioxide annually. JET's impact over the more than 25 years of its existence is almost immeasurable in scope. The small all-woman team's activities have included long-running environmental education programmes, spearheading coastal cleanup efforts, island-wide monitoring of sea turtle nesting sites, and ongoing advocacy campaigns — including a successful challenge to “Save Goat Islands” from industrial development — through the extensive use of social media platforms.

These are just some of the women doing their part to help mitigate the effects of the climate crisis in Jamaica and throughout the Caribbean. The hope is that their efforts will serve to make the wider public aware of the speed and gravity with which environmental change is happening, and inspire them to make changes in their own behavior to help alter its effects on small island developing states.