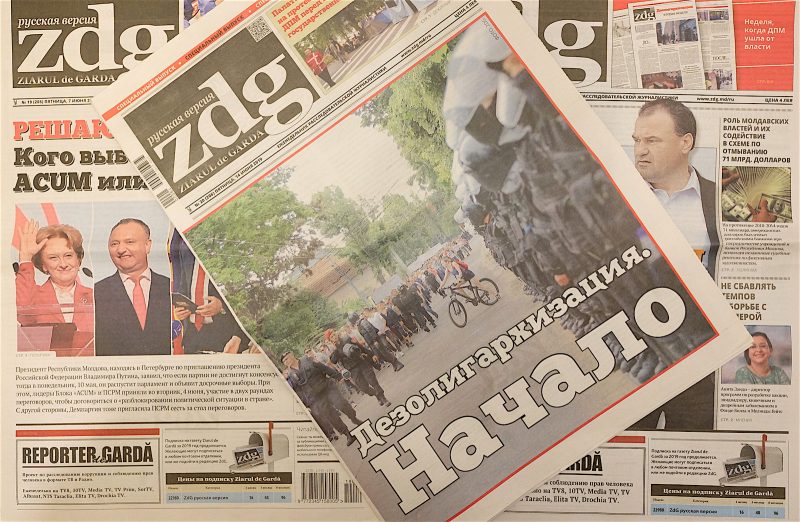 Moldova seldom makes international headlines. When it does, the country usually plays a walk-on role in a greater drama between Russia and the West. But that script changed last month, when bitter foes put their differences aside to oust nominally pro-Western but deeply unpopular rulers.

Parliamentary elections in February proved inconclusive: by June, a government had still not formed and snap elections seemed likely. But on June 8 the unexpected happened: the pro-Russian Party of Socialists (PSRM) and the pro-European ACUM-PAS bloc turned on the ruling Democratic Party of Moldova (PDM) and formed an “anti-oligarchic” coalition. The PDM refused to accept defeat; the next day, prime minister Pavel Filip dissolved parliament and the country’s constitutional court called the new parliamentary majority illegitimate. This standoff lasted about a week before the PDM yielded. Its leader Vlad Plahotniuc, widely regarded as the most powerful man in Moldova, fled the country. ACUM leader Maia Sandu became prime minister.

These events were made possible by the readiness of Moldova’s opposition to put its geopolitical differences aside in order to pursue “deoligarchization” and clean up a state described in a 2018 European Parliament resolution as “captured by oligarchic interests.” Notwithstanding some protests, Moldova’s change was largely forced by institutional politicking and pressure from both Russia and the West. This is why some observers such as Dumitru Alaiba, an economist and member of parliament, called the events a “silent revolution.” Meanwhile, internet users christened it #PlahaPad (a play on “Leninopad,” the name for the fall of Lenin statues across Ukraine after 2014, and Plahotniuc’s nickname).

Either way, change is afoot. And for Moldova’s beleaguered journalists, it’s come not a moment too soon. The run-up to parliamentary elections saw several incidents of verbal and physical assault on journalists; In 2019, Reporters Without Borders’ Global Press Freedom Index ranked Moldova in 91st place, down from 81st the previous year. This was one of the steepest declines in Eastern Europe. The country’s journalists have complained of an opaque and inaccessible government, an oligarch-ridden media landscape with poor journalistic standards, and harassment by the authorities.

“Ministers didn’t hold press conferences. The government only held briefings without the right to ask questions, and these were held in the offices of the ruling PDM party, to which not all journalists were allowed access. Land records which should have been public were only available at high prices, and a lot of information simply wasn’t online. The distributor of print publications was under state control, so sometimes papers didn’t reach readers,” explains Alina Radu, editor and co-founder of Ziarul de Gardă, a weekly investigative newspaper published in Romanian and Russian, has told Global Voices.

Just after the recent change of power, investigative outlet RISE Moldova published leaked documents attesting to an extensive surveillance campaign conducted by the previous authorities against their opponents. A list of names of those surveilled mostly included opposition activists and politicians but also journalists such as Vladimir Soloviev, correspondent for the Russian daily Kommersant and founder of the Russian-language independent outlet NewsMaker. Radu suspects that the real number of journalists under surveillance may have been much higher.

In April 2017, Soloviev wrote that he had been followed through the streets of the Moldovan capital Chișinău by unknown men and a mysterious black car. There are even more sinister stories; in 2016, somebody tried to blackmail the prominent investigative journalist Natalia Morari with an intimate tape filmed inside her own apartment.

Morari revisited the event during a TV broadcast during the recent political upheaval, when explaining why she was wearing a t-shirt with the words “Je Suis Moldova.”

Exactly three years ago, I went on air wearing a t-shirt bearing the words “Smile! You’re being filmed by a hidden camera.” The day before, I had received a call shortly before I went on air from a person close to Vlad Plahotniuc who warned me that a video would soon be released to the public showing me and my husband making love at home. […] I remember how worried I was that day; I was shaking throughout the entire broadcast. When I got home, I understood that the only way to defend myself was to declare that I was being blackmailed. […] I know that back then many people didn’t believe me. Many, including colleagues from the press, accused me of trying to do PR for myself. But believe me, it’s not very pleasant to see a recording taken from your own apartment, when you’ve been filmed secretly and you don’t know how long that camera has been in your home.

According to my information, which I hope to confirm given that we now have an independent prosecutor, the person responsible for installing wiretaps and video surveillance of me was [former Deputy Secretary of Police] Gheorghe Cavcaliuc. I had kept silent about this for all these years, but according to my information, Cavcaliuc was responsible for that video camera.

Given staff changes in state institutions, Morari hopes that those who blackmailed her will be brought to justice. But Morari also complained about the conduct of hostile media outlets which gloated about the incident at her expense. That may take longer to change.

Under the previous government, Moldova’s television market was largely monopolized by Plahotniuc and his associates. A pliant advertising commission funded granted deals to loyal print and broadcast media and kept away from critical outlets; Moldovan journalists demand the reform of this. Until and unless the new authorities issue a legal challenge to freeze his assets, Plahotniuc could still control a significant section of Moldova’s media landscape absentia. Channels continue to broadcast fervent criticism of new Prime Minster Maia Sandu and PSRM leader Igor Dodon to this day.

But Vladislav Kulminsky, a political scientist who was recently appointed advisor to Sandu, doubts that the oligarch will be able to maintain this media empire from afar. “In a lot of the country, Plahotniuc’s TV channels; PublikaTV, Channel 1, Channel 2, Prime; are the only channels people can get hold of. And he’s spent a lot of money on supporting them; he extracted that money illegally from state enterprises and monopolies on importing goods to Moldova,” explained Kulminsky in an interview at the government building in downtown Chișinău.

“In the end, you had a system where all profitable businesses yielded revenue to Plahotniuc and his immediate circle, which was then used to pay public officials in envelopes and maintain this huge media empire. So today, it’s a question whether he’ll have access to these flows of cash to subsidise that empire. I think it’s only a matter of time before his [media] influence ends,” the prime minister’s advisor told Global Voices.

This polarized media landscape conditions how Moldova’s politicians interact with the press, says Maria Levcenco, a journalist and media expert at the Institute for Strategic Initiatives (IPIS), a Chișinău-based think tank. “Politicians in Moldova are used to communicating with journalists who are loyal towards them,” continues Levcenco, who wrote one of the most comprehensive profiles of Plahotniuc for the international press. “What I don’t want is for the roles to simply be reversed now that the PDM are in opposition. Journalists shouldn’t be ‘for’ or ‘against’ any politician, and I don’t want those categories to remain the basis for how politicians and officials chose whom they talk to,” she concluded.

Felizia Nedzelschi, a Moldovan journalist working for independent online publication Agora.Md, told Global Voices that her colleagues were initially torn about how to respond to the new government. Were they to join in the chorus of criticism and risk reinforcing the narrative set by Plahotniuc’s media empire, or should they seek to provide balance by toning down their criticism? Nedzelschi and Ștefan Grigoriță, a journalist at Radio Free Europe/Radio Liberty’s Moldovan service, concluded that the responsible stance was never to withhold criticism, but to ensure that criticism is factually accurate.

“Yes, we appreciate the pro-democracy and pro-EU orientation of the government. But we have been critical over the past 15 years of 12 governments and will continue to be critical of this one; we’ve already published critical pieces on conflicts of interest concerning two members of this government. We understand that if you don’t criticise [politicians] at the right time, they will install themselves too deeply and stop listening to any criticism,” remarks Radu, the Ziarul de Gardă editor. She adds: “We won’t stop. We’ve suffered too much.”