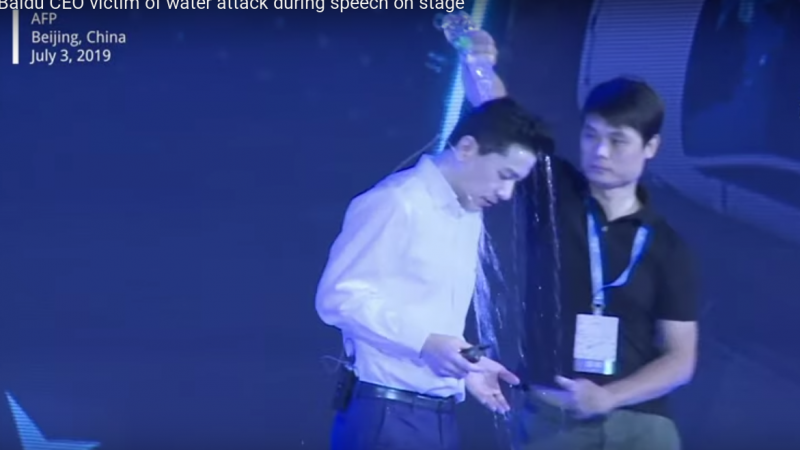 The chief executive of Chinese tech giant Baidu, Robin Li, had an unpleasant shock on 3 July when an audience member doused him with water during the company's annual artificial intelligence conference.

Li resumed his talk after security guards escorted the water attacker off stage, but video footage of the incident quickly went viral. Not much is known about the man but local media has reported that he was placed under administrative detention for five days by the Beijing Chaoyang district police and released on 9 July.

Although the water attacker's motivation is still unknown, many Chinese netizens were quick to applaud his actions and to mock Li, airing their own grievances against Baidu in the process:

This man should be awarded for such a nice act.

Did Robin Li catch a cold? Have a body check up at Putin hospital group. [Putin hospital group runs a large number of private hospitals in China and has been notorious for misleading patients for expensive and unnecessary medical treatment.]

These search results have reinforced Chinese netizens’ beliefs that Baidu's search engine is unreliable and cannot be trusted.

Public outrage against Baidu emerged in 2016 when 21-year-old student Wei Zexi complained that his family was misguided by the Baidu search engine when looking for rare cancer (synovial sarcoma) treatment information. Wei eventually died after the family spent all their savings on a scam treatment found during their online searches.

Since then, negative sentiments against the tech company have grown, as many of its users feel that Baidu's algorithm only populates content from its own platforms.

In early 2019, media researcher Fang Kecheng wrote an article titled “Baidu search engine is dead” which claimed that the search engine harms the open internet with its artificial intelligence (AI) that only caters to the company's interests. Fang noted:

In Baidu’s search, half of the generated resulted are from Baidu’s own platforms, in particular from Baijia hao [NOTE: Baijia hao is Baidu's content platform]

Fang's research looked at Baidu searches related to “Brexit” which generated a total of  7 results. The first result was from Baidu Baike (a Baidu version of Wikipedia) and the #2, #4, #5, #7 search results were from Baijia hao. Only two items were from other Chinese platforms.

In the past, Baidu's search engine has also prioritized viral fake news articles. In a recent example, as highlighted by Fang, joke news site The Onion published a satirical article about the 9/11 attacks that was subsequently translated into Chinese and published as if it was real news. The article then went viral and now it shows up on the top of Baidu's search results when people look for “Osama Bin Laden”, “911” or “CIA”. While China has very strict laws regarding the spreading of rumors online, the spread of this fake news story has been helped along by Baidu's search algorithm.

Although an August 2018 poll showed that 72.8% of Chinese users prefer Google over Baidu, the American tech company left the Chinese market in 2010 after it refused to comply with censorship requests. Many Chinese netizens perceived the incident as the Chinese government’s market protection policy which is seen as a protection mechanism against external competition.

China has high expectation for Baidu and it has a huge responsibility. Whenever Chinese officials visit other countries, they will be asked why an open China would block Google search. The government has paid huge price and expected Baidu to perform well.

[China is] a country with 800 million netizens, and while both the government and people support the company, how does Baidu perform today? Baidu could not channel information from Taobao, WeChat, Today’s Headline, Duoyan etc. In the end, its search only links to its own product – Baijia hao.