In a city increasingly overtaken by skyscrapers, the Salaam Cinema has become a symbol of resistance. 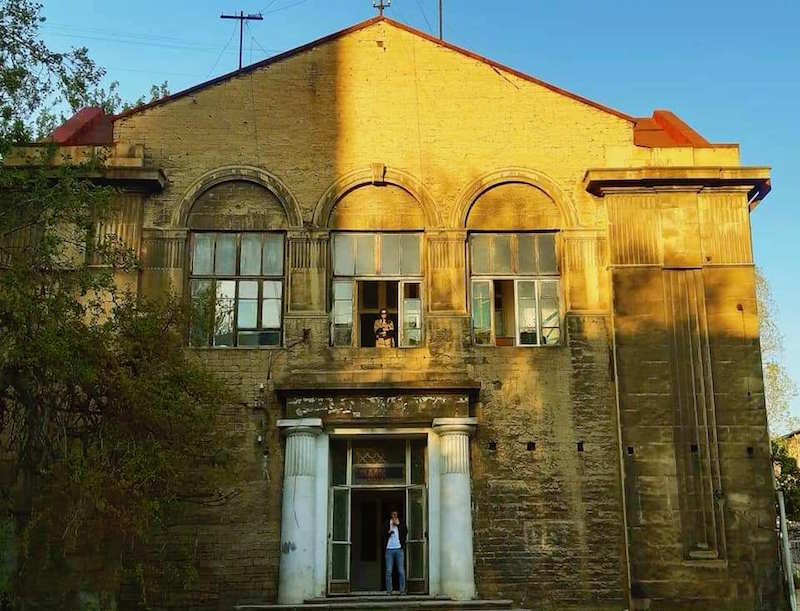 A community of artists and filmmakers in Baku, Azerbaijan, seem to have won a weeks-long battle with the authorities to halt the demolition of the Molokan House, a century-old building that houses the underground movie theatre Salaam Cinema.

Borrowing the name from Mohsen Makhmalbaf's 1995 film “Hello Cinema“, Salaam Cinema is one of Baku's few independent cultural spaces — besides screening films, it regularly hosts performing arts, exhibitions, and workshops. The initiative was founded three years ago by Leyli Gafarova and her husband Ilkin Huseynov, a local couple who had at that time moved back from the EU.

“We wanted to screen movies in buildings which were already used as film theaters; we started renting a small room inside the Veten film theater but then the theater was destroyed [in 2017] and we lost our space,” recalls Leyli in an interview with Global Voices.

In early 2019, they managed to rent the Molokan House, a building constructed in 1913 as a prayer house for Azerbaijan’s small Molokan community, a Russian sect banished to the South Caucasus in the 19th century. After the Bolsheviks took over, the building was handed to the Radio Broadcasting company who used it to host the radio show “Danışır Bakı” (Baku on Air). With the dissolution of the Soviet Union, the house remained more or less abandoned until 2018, when Salaam Cinema moved in.

“We knew from the very beginning that the landlord wanted to destroy the space because that's what he did [for a living]; he demolishes old buildings, builds new ones and then sells them,” says Leyli. “He also didn't understand what we were planning on doing there. When we told him we planned screening films, having discussions and workshops he thought we were going to make films inside the building and so he kept asking what movies we were going to shoot inside and so on,” she continues.

After the space was finally rented in 2019, the group began setting up a tea house on the first floor and use the second floor to host screenings, exhibitions, and a co-working space. By March 2019, much of the renovation work had been completed and the Salaam Cinema team went on vacation to celebrate Novruz, the Azerbaijani and Persian new year festival.

When they returned from the holiday, the team found the first floor of the building completely destroyed. The landlord soon informed the group that they were to vacate the building as it was scheduled for demolition.

Little did he know that the community wouldn’t back down so easily. For weeks, the space's supporters camped inside the building, while letters were signed and petitions sent to all government institutions. Their appeals stressed that they were fighting not only to save a popular cultural venue but to preserve yet another piece of Baku’s architectural heritage from vanishing forever.

It was not until Azerbaijan’s first lady Mehriban Aliyeva stepped in that the landlord had to take a step back. In a statement released on May 8, shortly after she had been sent an appeal by the artists, Aliyeva noted the importance of protecting Azerbaijan’s cultural heritage.

An intervention from somebody widely regarded as Azerbaijan’s most powerful woman proved to be crucial. On May 30, the State Service for the Protection, Development, and Restoration of Cultural Heritage under the Ministry of Culture added the building to the list of newly discovered historical sites.

Plans for the future

Leyli says that although the final decision has not yet been made, Salaam Cinema has kept busy. Its artists and volunteers have continued holding events and working on renovating the building. With the assistance of Sabina Fakhraddin Abbasova, a Baku-based architect and urbanist, they have also developed a plan for a community garden outside the building.

The garden and a new cafe are part of a new initiative by Salaam Cinema focused on historical and natural conservation. Their first event dedicated to the topic was held on July 6 at the Molokan House. 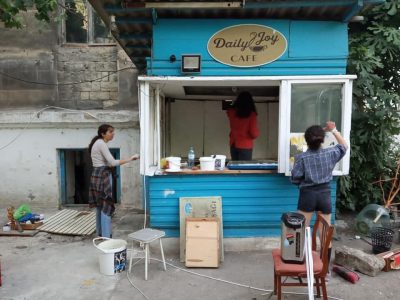 Members of the Salaam Cinema commune construct a cafe near the former prayer house. Photo by Leyli Gafarova/OC Media, used with permission.

The Salaam Cinema's story is one of a community of young, passionate Azerbaijanis who wanted to preserve a historical building and a cherished communal space they had worked hard to create. It attests to the importance of spaces where young people can come together, talk, work on their own projects, watch films, attend workshops, and simply enjoy their youth.

Greater things than mere survival are in store for the Salaam Cinema: as Leyli noted in a 2017 interview with the organizers of Azerbaijan’s Youth Film Festival, she hopes that the Salaam Cinema can become “an independent film theater, holding exhibitions, festivals, and educational programs.”

If Leyli achieves her vision, this two-story commune of artists may come to play an even more important role for the capital’s cultural life. In a city fast becoming unrecognizable, it is all the more important to remember that skyscrapers are not the limit.