The lives of South Asians in Khon Kaen, northeast Thailand 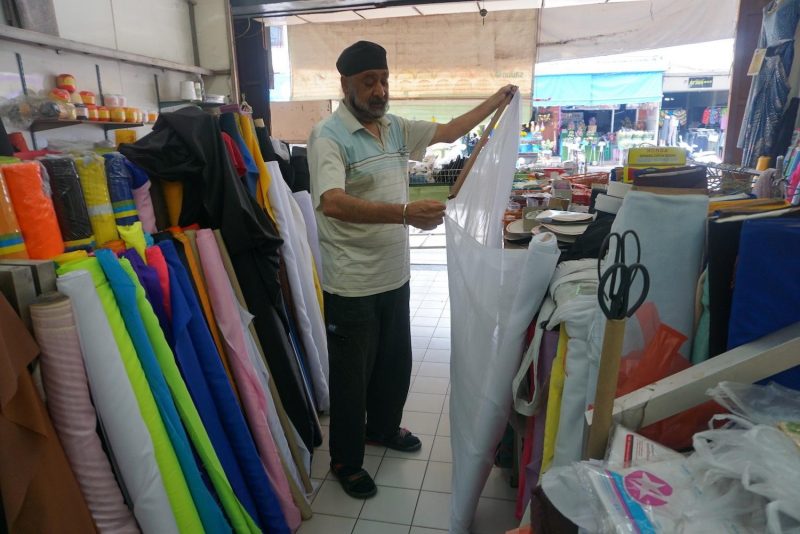 Narinthorn Sachdev measures cloth for a customer in his store. Photo and caption from The Isaan Record, used with permission.

This edited article by Priya Vaikuntapathi is from The Isaan Record, an independent news site in Thailand, and is republished on Global Voices as part of a content-sharing agreement.

Soft pop music is playing as the wind rustles through the outdoor patio, carrying the rich aromas of Indian spices and sizzling hot curries. A tall, dark-skinned man dressed in Western clothes, walks out of the kitchen carrying a tray of buttery naan and steaming jasmine rice.

When Queentrus Dominic, known as Quinn, moved to Khon Kaen in northeast Thailand in 2010, he thought he was the only South Asian not just in the city but in the entire region. Deprived of his Sri Lankan home cuisine and a businessman at heart, he opened Quinn’s One and Only, an Indian restaurant, in 2018.

Quickly, he found that he was far from the only South Asian.

South Asians of diverse backgrounds, whether they’ve been in Khon Kaen for generations or ten months, are making unique impacts on the city’s cultural landscape and changing local perceptions through daily interactions.

From South Asia to Isaan

Over 29.5 million people have emigrated from South Asia across the world, according to the United Nations’ 2017 International Migration Report. They include people from India, Sri Lanka, Bangladesh, Pakistan, the Maldives, Nepal, Bhutan and Afghanistan. Of the millions making up an incredible diaspora, there are 40 to 50 South Asians living in Khon Kaen.

Although many have recently immigrated due to job opportunities, South Asians have been in Khon Kaen since the 1930s.

Sporting a turban, a beard, and a hearty laugh, Narinthorn Sachdev, 54, a Sikh man, recounts his family immigration story of over 90 years. The family of the proud businessman of Thai, Indian, and Sikh heritage first started coming to Thailand in the 30s. After Pakistan split from the newly independent Indian in 1947, his clan left their home in Gujirawala District, now Pakistan, and many moved to Isaan. Khon Kaen is one of the four major cities of Isaan region.

Sikhs have settled in Thailand since the late 19th century. Some of them migrated as fabric traders and tailors to Isaan. During the Vietnam War, a second wave of Sikh immigrants moved from Bangkok to cities with large United States military bases like Udon Thani and Nakhon Phanom, tailoring their businesses to the needs of American soldiers.

Having been in Khon Kaen for generations, the local Sikh community is strong, with an active temple located in the city center. Sikhs in Thailand have gained royal patronage — support from the royal family. Sikhism is one of five religions in addition to Buddhism under royal patronage.

Growing up in Khon Kaen in the late 1960s, Narinthorn says it wasn’t always easy being different from the other children. He remembers his childhood struggles of being bullied because of his appearance and faith.

But today he laughs about these experiences as he recalls a time when his father came and scared the bullies away because the kids had never seen a tall man with a turban and long beard like him.

Many online forums claim that Thailand can be unforgiving to people of Indian descent. Racial slurs against South Asians have been used in addition to other stereotypes, claiming that Indians have a bad smell, that their food is too oily and unhealthy, that they exploit and cheat people and more.

For Indians, it’s quite negative actually because we have general perception toward Indians as ‘smelly and demanding’.. I don’t think I need to explain anything much on the smell. For ‘demanding’, we feel like Indians love to ask and demand for this and that all the times.

But Narinthorn is sure that he hasn’t faced much discrimination in Khon Kaen. Because of his long-standing local business, his family has gained a lot of respect in the community. At the same time, though, he has grown a bit tired of constantly having to convince people that his nationality is Thai.

Other South Asians who moved to Khon Kaen more recently say their experiences have been overwhelmingly positive.

Sanchita Chatterjee, an Indian working as a program specialist at the Mekong Institute, describes Khon Kaen as a fantastic place to live for her and her daughter. She acknowledges the struggles that come with raising a child in a new country, but this has little to do with their Indian background.

On the weekend, I go to Tesco Lotus Extra. I go to Central Plaza. I don’t see anyone who looks like me, not that it bothers me. I’ve gotten used to it. It’s not like anyone stares or anything. That’s not in the culture…Thais are very accepting.

Nazir Ul Haq, a Pakistani Muslim working at the Mekong Institute who migrated to Khon Kaen over two years ago, doesn’t feel that his identity plays a large role in his work. Although he has faced some issues in other countries, such as Myanmar, because of his identity, overall, he feels that it is not something that affects him in Thailand.

People tend to test their own stereotypes when we interact and it breaks the general stereotypes people have about South Asians. 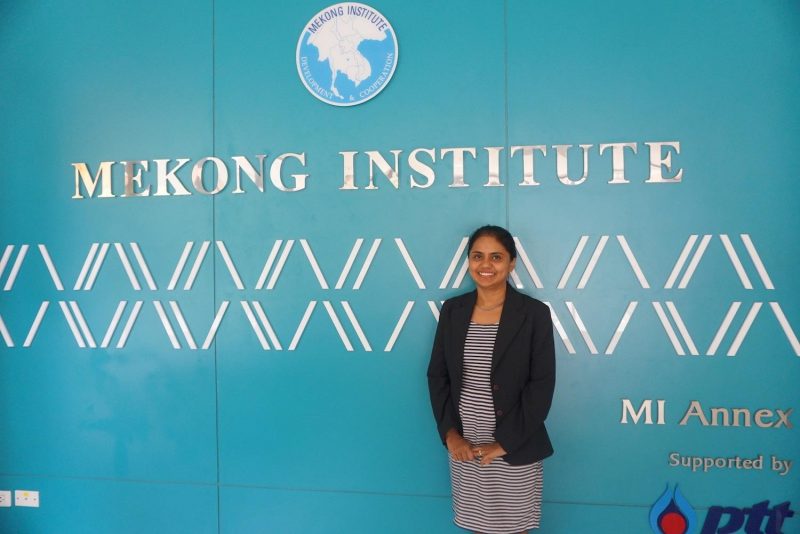 Sanchita has been living in Khon Kaen with her daughter for ten months. She doesn’t feel that her Indian background plays any role in her workplace at the Mekong Institute because she brings experience and expertise to her job, not her identity. Photo and caption from The Isaan Record, used with permission.

Restaurant owner Quinn has experienced a lot of curiosity because of his appearance, looking South Asian and dressing in Western-style clothing.

Before coming to Khon Kaen, Quinn had moved to the United Kingdom from Sri Lanka at the age of nine after his father was killed in Sri Lanka's civil war. He quickly learned how to adapt to a new culture.

In a way, [adapting to Thai culture] wasn’t forced on me because I knew I had to [adapt] if I wanted to live here, since I’ve done it before…It was kind of easy. I knew what I had to do.

Reflecting on the racism he faced growing up in the UK, he says he never experienced anything like that in Khon Kaen.

They don’t give you any headaches, any nasty stuff like we get in Europe or America nowadays. They’re like ‘Are you happy in Thailand, in Khon Kaen?’ That’s cool! 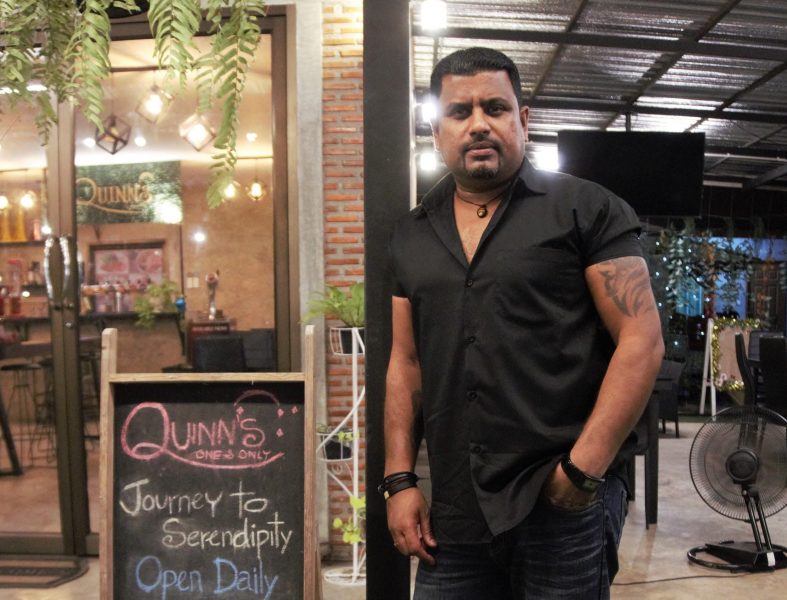 “People kept saying to me, ‘it’s not possible…you can’t sell Indian food here. You can’t do that.’ No. If you put your mind to it, you can do it,” Quinn says. Photo and caption from The Isaan Record, used with permission.

Originally, Quinn believed widespread claims that Thais don’t like Indian food and marketed his restaurant mainly toward foreigners. But he was happily surprised when proved wrong. Around 60-70 percent of Quinn’s customers are Thai. And he didn’t make his restaurant work in the middle of the city, but rather in one of the semi-rural villages on its fringes.

People just came up with all kind of assumptions, you know, and I believed it as well, but looking at it now, it was completely wrong, and without [Thai customers], I probably wouldn’t survive at all.

“I want to change the narrative about Indians through food!” Quinn says.

Through daily life and interactions, the small number of South Asians are slowly changing minds about stereotypes and initial perceptions that people have. They are taking steady steps to be a part of Khon Kaen’s growing cosmopolitan community and change the way people think about them.

“I think I’ve changed the narrative quite a bit in this village,” Quinn says as he quickly gets up to help a server with a delivery.

The sun sets on the beautiful, outdoor terrace of the restaurant as customers walk in and out of the restaurant. Quinn sits back down, looking out into the busy atmosphere of his restaurant, a smile on his face. “See? Thais love the food!”

*Priya Vaikuntapathi is a student of Global Studies at the University of Illinois at Urbana-Champaign in the United States. She studied development and human rights in Khon Kaen in the spring 2019 semester.